In the spirit of support to those who most need help, Direct Media organised a humanitarian basketball tournament at the year’s end for its partners and set aside funding for a tournament prize that was donated to the national association of parents of children with cancer, NURDOR. 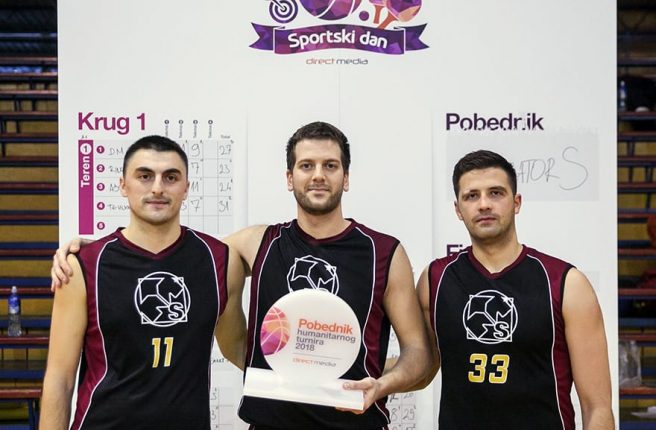 The sum of ten thousand euros given by Direct Media to NURDOR together with the tournament’s winner Mercator S will be used to buy a diagnostic apparatus for the haemato-oncological ward in the Institute for Health Protection of Mother and Child, Dr Vukan Čupić.

“This year the national association of parents of children with cancer, NURDOR, is celebrating its 15th anniversary. Our mission from the beginning has been to ensure the best conditions possible for treating children. We are succeeding in this thanks to many friends like Direct Media, who has already been with us for many years and who made possible the building of a haemato-oncological ward in Niš, and every year makes the International Childhood Cancer Day on Republic Square possible ”, said Marija Đurović, a member of NURDOR’s managing board.

“Thank you to our partners and their teams who responded to the tournament in such numbers. It is a pleasure that with such activities we can promote our common values, which resemble those of sport: fair play and team spirit”, said Jovan Stojanović, Chief Operating Officer of Direct Media.

The humanitarian basketball tournament was the central event at the Direct Media sports day, which marked a whole day of sports and recreational activity for the staff.

The media is changing, and the time spent using the media is extending. This was also shown by the statistics of company Nielsen for...
Read more

A New Era Has Begun

The start of 2019 was marked by a change in the visual identity of Direct Media and an announcement that regional marketing will enter...
Read more

In the presence of more than a thousand invitees, the Direct Media system, part the United Group, marked the beginning of a new cycle...
Read more

Marketing Experts At The 9th Direct Media Academy: Innovate, Do Not Imitate

"The next wave of innovation in the world will encourage corporations to change, using means that are already available. That is why we need...
Read more

There is a lot of talk about "what is the key to a successful relationship between agency and client" Jasna Dugalić, Account Manager at Direct...
Read more