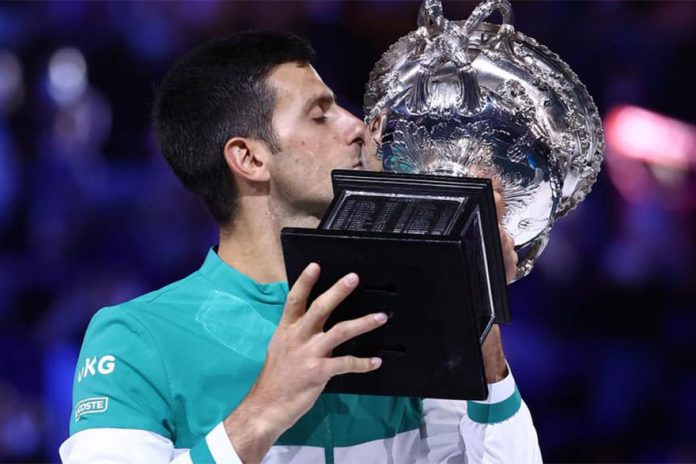 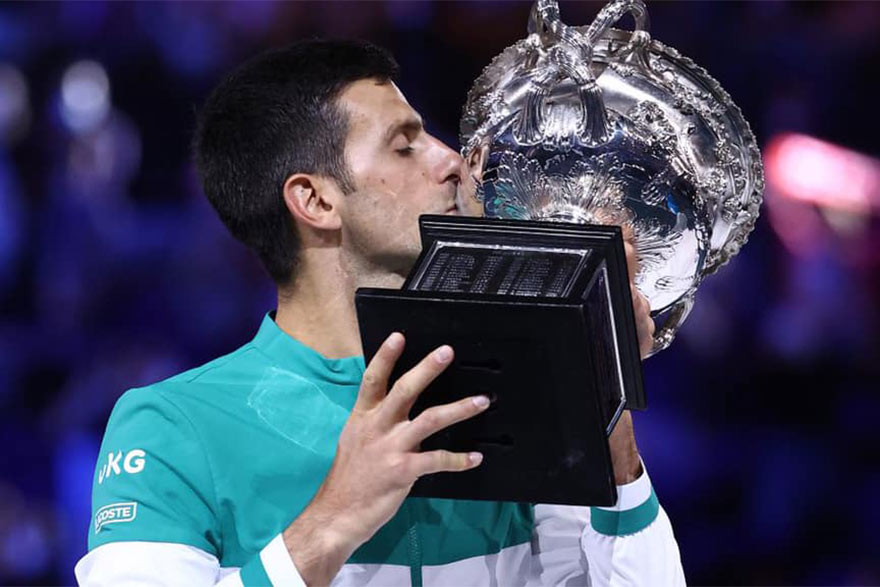 Novak Djokovic continued his dominance of the Australian Open by overwhelming an irritated Daniil Medvedev to win a record-extending ninth men’s title.

The 33-year-old Serb has never lost a final at Melbourne Park and beating Medvedev is a third triumph in a row.

Russian fourth seed Medvedev, 25, has lost both of his Grand Slam finals.

After collecting the trophy, Djokovic told the Rod Laver Arena: “I love you each year more and more. The love affair keeps going.”

Medvedev, who lost to Nadal in the 2019 US Open final, was tipped to push Djokovic close and win his maiden major.

The Russian had reached the Melbourne final on the back of a 20-match winning streak, but floundered under the intense pressure applied by Djokovic.

Throwing racquets, poor body language and shouting angrily at his team were an illustration of how the Russian imploded in the third set, contrasting starkly with Djokovic’s confident and steely exterior.

Djokovic clinched the title after one hour and 53 minutes with a backhand overhead volley, falling to the blue court on his back before lapping up the acclaim of the reduced 7,500 crowd.

Djokovic roared loudly and tapped his heart, before exchanging hugs with coach Goran Ivanisevic and the rest of his support team.

After thinking an abdominal injury earlier in the tournament might scupper his chances, the pride and relief of Team Djokovic was clear in their celebrations.

Brilliant Djokovic refuses to ‘hand over’ to younger generation

In-form Medvedev had, perhaps playfully, insisted “all the pressure” was on Djokovic because of his desire to chase Nadal and Federer in the battle to finish with the most men’s Grand Slams titles.

Maybe it was a ploy to deflect the attention off himself. Either way it did not work as Djokovic emphatically proved he is still the man to beat.

World number one Djokovic responded to Medvedev’s comments with a withering tone in his assessment that the younger generation “still have a lot of work to do.”

“I’m not going to stand here and hand it over to them,” he told Eurosport after his semi-final win against Russian qualifier Aslan Karatsev.

He was true to his word. Djokovic produced a masterclass of intensity, focus and execution, looking comfortable on a court he has described as a “home from home”.

Djokovic, like he had in his previous three Melbourne finals, started quickly with an immediate break of serve as he looked to stamp his authority.

Medvedev remain unflustered – until later in the match, at least – and continued in his attempt to drag Djokovic into some gruelling baseline exchanges.

Djokovic tried to avoid long points by employing the odd drop-shot but that helped the Russian to level at 3-3.

A fascinating opening set could have swung either way, but it was the reigning champion who edged it when he unpicked Medvedev’s serve again in the 12th game.

History was ominous for the Russian: Djokovic had only lost five of 264 Grand Slam matches when he had won the first set.

Medvedev went into the final on the back of a 20-match winning streak and had won his past 12 matches against top-10 opponents.

However, extending those runs looked unlikely once he began to implode in the second set.

After the pair exchanged breaks in the opening two games, Djokovic pounced again when a raft of unforced errors crept into Medvedev’s game.

Medvedev started to look a little irritated, perhaps partly because of some disruptive fans in the previous game but mainly because he could not negate Djokovic, bouncing his racquet down on the court before the Serb moved 4-1 ahead.

The racquet survived that, but not the second thud Medvedev gave it when he whacked a forehand long for 5-2.

Djokovic sealed the two-set advantage with a crunching forehand which Medvedev could not handle.

Medvedev had never won after losing the opening two sets, but did fight back against Nadal at the 2019 US Open to force a decider.

Negativity looked to be deep-rooted, however, and the prospect of a similar fightback looked far-fetched.

There was a brief glimmer of hope at 30-30 in the seventh game of the third set, but Djokovic held for 5-2 – prodding his temple with his finger to emphasise his mental toughness – and served out to seal a one-sided win which few expected.

“We know how tough Novak is and he played a sensational final,” said former British number one Annabel Croft on BBC Radio 5 Live.

“You have to be so dialled in, in all departments. Medvedev went away from the tactics he showed in the first set and went into a slump and a strop.”

Not the match I wanted. All respect to @DjokerNole. Proud of my Aussie summer and can’t wait to be back next year🙏 #workinprogress @AustralianOpen #AustralianOpen2021 pic.twitter.com/lSaM7na2cq

This was another astonishing Australian Open final performance by Novak Djokovic, at the end of one of the most stressful Grand Slam fortnights of his career.

The abdominal injury he suffered during his third-round victory over Taylor Fritz was not as serious as he first thought. But it compromised him for the next couple of rounds, and prevented practice on his days off.

He outlasted Milos Raonic and Alex Zverev in tense four setters, and was able to save his best until the last.

Daniil Medvedev spent much of the second half of the match in a one way conversation with his coach and wife. He was driven to distraction by Djokovic’s brilliance, but he showed surprising fragility for someone with previous experience of a Grand Slam final, and so many recent wins over top 10 players.

The world number one is firmly back on track. Two Slams behind Roger Federer and Rafael Nadal, with a six-year age advantage on the Swiss and 12 months on the Spaniard.

On March 8, 2021,Novak Djokovic should have reason to be happy: Then the Serbian will surpass RogerFederer's record of 310 weeks at the top of the ATP...
Read more

Roger Federer has been dragged into the dramatic saga, after world No 1 Novak Djokovic was booted out of the Grand Slam in dramatic...
Read more

Architect and artist Andrej Josifovski, better known as the Pianist, made the largest portrait of Novak Djokovic in the world. The drawing, 24 meters long...
Read more