The exhibition aims at accentuating and clarifying the significance of the Agenda 2030 and is organised by the Government of Serbia and the German Development Cooperation implemented by the GIZ, within the project “Public Finance Reform – Financing the Agenda 2030”.

“We are proud that Serbia had a very active role in creating the Agenda 2030, in defining the goals of sustainable development. She was also the only country in Southeast Europe that took part in defining the financial model of Agenda,” said Slavica Đukić Dejanović, Minister without Portfolio in the Government of Serbia, and President of the Interdepartmental Working Group for the Implementation of the Agenda 2030. “In December In 2015, Serbia formed the state body in charge of implementing the Agenda, creating the conditions for the implementation of 27 sustainable ministries and institutions, with the supervision of the Agency for Monitoring and Coordination of Activities.”

H.E. Thomas Schieb, the ambassador of the Federal Republic of Germany to Serbia, pointed out that the goals of sustainable development and acquis communautaire are closely linked and mutually reinforcing, and that they have a shared commitment to sustainability that will bring benefits to every layer of society. 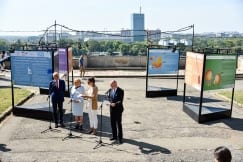 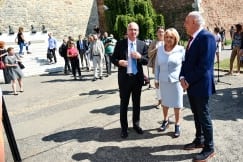 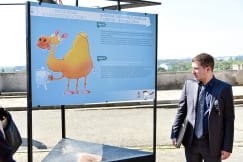 “To achieve this, all must make their contribution – politics, civil society, science and the private sector. For Germany, Agenda 2030 is a compass, not only regarding development policy but also in other areas. Very early, we set the goals of sustainable development as the basis for our work, and we are eagerly supporting Serbia in its efforts to achieve them. Goals can act as abstract ideas that may not be understandable to some individuals. Therefore, this exhibition intended to visualise them. I hope that during the coming weeks’ many people will visit the exhibition and that the exhibition will launch a public discussion in Serbia on the goals of sustainable development,” said Ambassador Schieb.

“In addition to supporting the implementation of Agenda 2030, Germany has supported Serbia, and in the process of joining the EU – since 2000, it has provided more than 1.8 billion euros for this purpose, which makes it Serbia’s largest bilateral partner,” he added.
The mayor of Belgrade, Zoran Radojičić, and also emphasised the importance of informing citizens about the goals of sustainable development.

The exhibition “The Objectives of Sustainable Development – Agenda 2030” will run until the mid-October.

The drafting of the Serbian Hydrogen Strategy is a multidisciplinary process and requires the contribution of the entire professional public and the scientific community,...
Read more

On behalf of the German Development Cooperation, GIZ has been closely cooperating with the Ministry of Education, Science and Technological Development and other relevant...
Read more

The Bell Tolls For Glass Recycling

In an effort to improve the percentage of glass packaging waste that's collected and recycled, German development cooperation has joined forces with private companies...
Read more