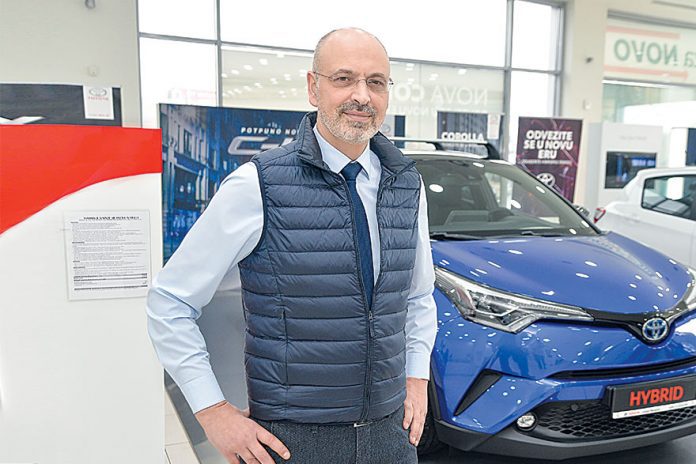 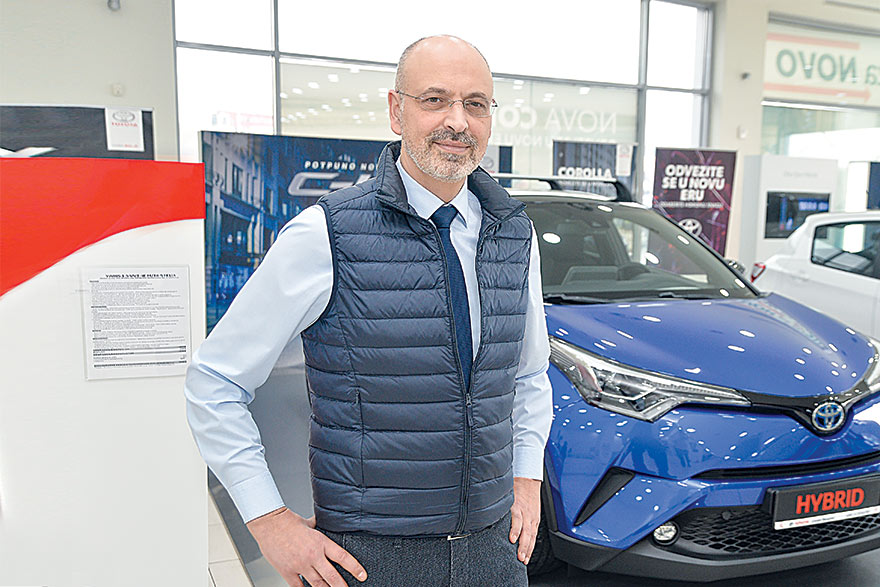 We are just launching the new C-HR, while the Proace City model will be unveiled at BG CAR SHOW 2020 at the end of March, and a few more novelties will arrive in the second half of the year, standing out among which is certainly the brand new generation of Yaris, reveals the Toyota Srbija director Robert Lukić speaking to CorD.

Ten per cent more new cars were sold in Serbia last year than in 2018. Is this a trend that’s encouraging or currently improving the situation on the car market? What are your business results like?

– After a great decline, the Serbian market is showing a recovery trend and has been growing constantly for several years. Increasing sales in the commercial programme is very important, because it shows that the economy is stabilising and that some level of development exists. Toyota is growing slightly higher than the market and we increased our sales by 17 per cent compared to 2018, and by a third compared to 2017. Last year saw 1,681 Toyota and 17 Lexus vehicles sold, as many as 406 of which were hybrids. There are several reasons for this, one of which is certainly a comprehensive game rebuild.

Last year we launched brand new generations of the RAV4, Camry, GR Supra and Corolla models, which are offered in three body styles (Sedan, Hatchback and Touring Sports). That practically equates to six new vehicles on the market, and that’s not the end.

Do you expect the country to restrict the import of used vehicles that have been banned from the roads of the EU as dangerous pollutants? How can citizens’ buying of new vehicles be eased?

– The state must protect its interests, or the interests of its citizens. The pollution we currently have in Serbia has set off all possible alarms and we can see that a specific Government response exists. Older vehicles are part of the problem, but they’re not the only one. That’s why it’s essential to have a package of measures with which to lay the groundwork for a lasting solution to pollution. If we’re talking only about cars, there is good practice in the world, especially in major European cities. All this can also more or less be applied in our country, and a lot depends on ourselves. Thus, certain bans are essential, but so is, for example, the better organisation of traffic to speed up vehicle flows and reduce unnecessary congestion.

Part of the measures must comprise various incentives for purchasing vehicles that pollute the environment less. That is a general interest and mustn’t be viewed narrowly as assistance to certain manufacturers. As a socially responsible company, Toyota has been developing a hybrid drive as a solution to the growing problem of pollution, which has escalated in the meantime. Purely economic reasons would direct development along a completely different course.

By abolishing the usage tax on hybrid vehicles, a long-standing injustice that virtually punished owners of eco-friendly vehicles was recently corrected. The state has also decided to assist with the renewal of the fleets of taxi companies, while a current topic is incentives for citizens that would help them purchase a new electric or hybrid car. All of this is encouraging, and we honestly hope that subsidies for citizens will be introduced soon, because without them there can be no quick solution to the current situation in Belgrade and our other cities.

Toyota Srbija is a partner of the Olympic and Paralympic Committees of Serbia. What are the various ways in which you help our athletes prepare for the Olympics, which will this year be held in Tokyo?

– Toyota Srbija, as a sponsor, allocates certain funds and vehicles with which is directly assists the work of the Olympic and Paralympic Committees. We organise numerous activities and events at which we promote our cooperation and Serbian sport, and also encourage the Olympic spirit. We are advancing towards Tokyo 2020, where we expect our Olympians and Paralympians to win a record number of medals.

For many years, excellent bilateral relations between Japan and Serbia did not lead to equally successful economic dealings. Today, however, it seems that the...
Read more

Prioritising The Well-being Of Society

Toyota has always participated actively in the creation of a better society with its uncompromising commitment to quality, continuous innovation and respect for the...
Read more

Takeda is determined to provide transformative healthcare solutions and products. At this company they feel a responsibility towards patients, colleagues and other stakeholders, but...
Read more

We are looking forward to the moment when we will be able to meet face-to-face and continue working on our projects together with our...
Read more
Cord MagazineLeaders Meeting Point