Swiss Army helicopters have been deployed to...
Read more

This year the number of guests from...
Read more

The Largest Lavender Plantation In Serbia

In the vicinity of Bela Palanka, between the Stara and Suva mountains, you can find the third-largest lavender plantation in the world.

The plants that grow there are of the highest quality. Although lavender is originally a Mediterranean plant, it can also thrive on the territory of Serbia. 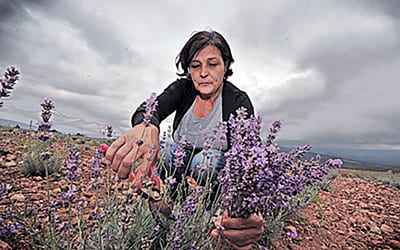 Ljiljana Petrović from Niš has devoted herself to the organic production of lavender. At the foot of Suva mountain, some 25 kilometres from Niš, she has raised a plantation covering more than 30 hectares. She has planted 600,000 seedlings of Lavandula Vera, the original French lavender that is used as a base for all perfumes and in medicine.

She came up with the idea on one of her many journeys to Italy and France. The climate between the Suva and Stara mountains is similar to that of the Mediterranean and maybe even better for growing lavender. Hot winds blow from the Aegean Sea during the day, the soil is poor red soil laden with rock, and throughout the night the climate is typical of the mountains – the air temperature drops, allowing the preservation of valuable etheric oil. 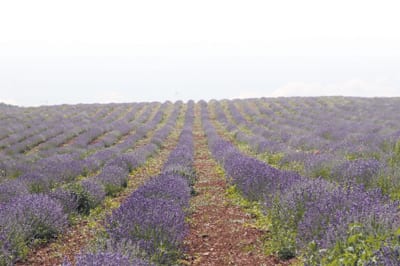 Ljiljana has established cooperation with many people, most of them youngsters, like her friends’ children. She has taught them how to grow lavender and is now purchasing the lavender quantities she needs from them.

Work on the plantation starts in March and continues until late autumn. In addition to her full-time staff, she hires fifty or more day labourers to help out during the high season. In the first year of growth, the yield of a lavender flower is almost negligible. Full yield and real profitability do not come before the third year, while the average exploitation period of a lavender plant is ten years. One well-developed lavender bush produces 1-1.5 kg of flowers. It is most profitable to sell lavender oil on the global market, where it reaches a price of about 90 euros per litre.

The etheric oils produced on this and the cooperating plantations are well established on the Belgian market, but Americans, French, and Italians have expressed also their interest.

Export Of Fruit From Fruška Gora 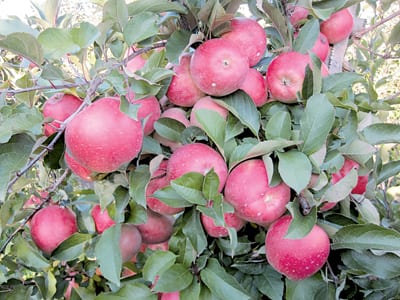 For over 30 years the southern slopes of Fruška Gora at Borkovac Lake have been a symbol of passion for quality and freshness. Production of the best quality fruit is maintained thanks to the love of nature, a unique combination of geographical conditions and connection between man and nature.

Thanks to entrepreneur Zoran Kovačević, his company Donerra d.o.o. unites modern technology, a visionary approach and a team of top experts in fruit production. 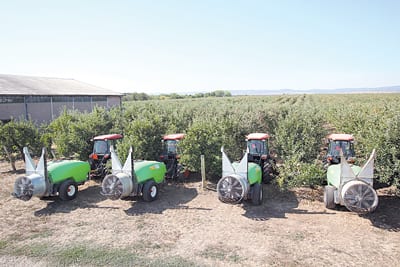 Today the Donerra production complex covers around 170 hectares and, by applying modern agrotechnical measures and controlling the entire production process, it guarantees the top quality and safety of the most delicious varieties of apples, pears, apricots and sweet cherries. Most of the production is exported to Russia, while the plan is to expand this export to the markets of North Africa, India and China. Next year a refrigeration facility is planned with a capacity of 3,500 tonnes. In the next five years, the entire area of the orchard will be irrigated and secured with an anti-hail system.

The Lazar Company started operating in 1994 as a consumer goods trader employing two staff. In 1998 it expanded its business activity to include milk processing and making dairy products.

The reason behind the expansion was our healthy environment and the capacity to use our resources. It was planned to process 1,000 litres of milk a day. The Lazar Dairy started operating in 1999.

The company’s primary product was, and still is, Blački kačkavalj (Blace hard cheese). 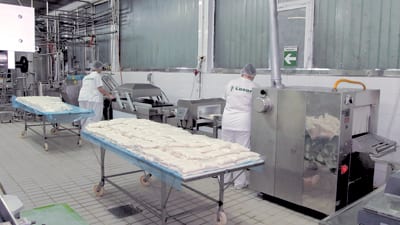 However, in response to the daily market needs and, using state-of-the-art technology, the company has so far developed a dozen new products: yoghurt, pasteurised milk, hard cheese, crumbled cheese, feta cheese, cream cheese, peppers filled with cream and butter. In 2003 the Lazar Company acquired D.P. Napredak Blace, a company in receivership. In just 90 days they managed to refurbish their building, with a surface area of 1,500 square metres, and to adapt it to suit dairy production needs. With this, the company upgraded its production processes to meet the demand for its products, which is increasing daily.

In this new facility, about 50,000 litres of milk a day are now processed, and its capacity allows for 80,000 litres. The number of staff has multiplied. Lazar Dairy now employs 120 people and more than 2,500 agricultural households produce milk for the dairy. 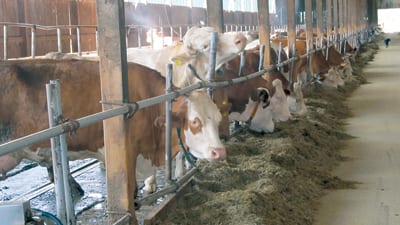 The dairy buys milk in Toplice and Ras Counties, located in the southern and central part of Serbia respectively. Over the past three years, it has imported more than 500 Simmental milking cows from Austria and distributed them across their largest cooperating agricultural households.

Simmental cattle are among the oldest and most commonly used cattle in the world. This project was very successful, as it enhanced the genetic composition of livestock in the area and increased the productivity level and cost-effectiveness of the business. A station for 300 cows was built in Draguša village, 5 km from Blace. This facility, with a surface area of 6,500 square metres on 8 ha of land, will produce supreme quality fresh milk with which the dairy will be able to compete on the EU market. They are HACCP and ISO 9000/2000 certified. They have their own biomass plant and use both fertilisers and manures. They export to Russia.

On Fruška Gora there stands a monument to the Roman emperor Marcus Aurelius Probus who was born in Sirmium (today’s Sremska Mitrovica), on the spot where he planted the first vines 18 centuries ago. 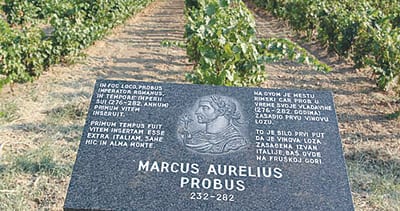 Marcus Aurelius Probus brought the grape to the southern slopes of Fruška Gora at the place known as Šumljanska Glavica, and now Milorad Milošević has returned the vineyard and honour to both him and Sirmium.

“This is a historic spot, and why should we not tell the whole world, Europe and everyone that it was here that the grapevine began to grow, to develop and to start its journey across Europe?” asks Milorad Milošević.

He began by clearing a small grassy slope, but eight years later the vineyard had spread over 25 hectares. He spent his working life in Slovenia but invested five million euros in vineyards in his native Srem. 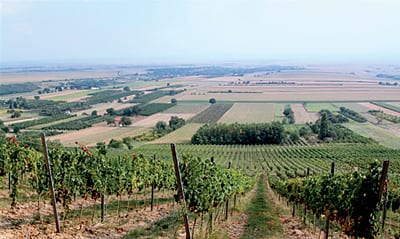 Last year 30 tonnes of his grapes ended up in other people’s wineries, but this autumn he will be making wine in his own winery in Veliki Radinci. He also planted vines on four hectares of school grounds, allowing a dual education for students of a Vojvodina programme “Vinar Vinogradar”. These students do practical work and become familiar with the process, from planting to harvesting and finally making the wine.

“Everything that Fruška Gora vineyards and the people of Srem can offer”, he says, “will find their place in the Temple of Wine where 250,000 litres will be made. Local and international certificates are already issued and the first bottle is sealed in honour of the Roman founder of Serbian vineyards.” 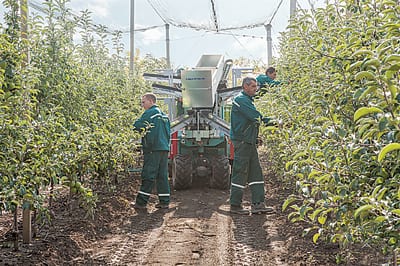 Priority is given to varieties that are dominant on the world market, Golden Delicious, Granny Smith and Gala.

13,500 tonnes of ULO cold storage capacity was built to be competitive on the world market and to ensure the customer receives the highest quality goods. The cold storage is equipped with a sorting machine with a capacity of 12 tonnes/hour. Another cold storage of 8,400 tonnes is planned. Apple yield is about 70tonnes/ha and 90% of the production goes to Russia. The company’s plan is to grow another mixed modern plantation on 160 hectares, where they will cultivate blueberry, cherry, pear and apple. 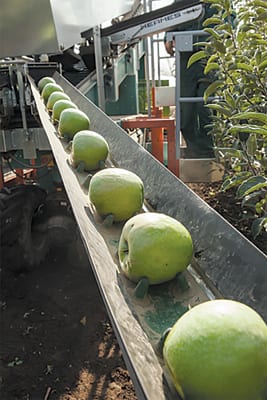 The company has well-developed, intensive vegetable and crop production. Vegetables – lettuce, bell pepper, chilli pepper, cucumber and tomato alternate during the year on a protected area of two hectares.

Crop production takes place on 2,500 hectares, with modern machinery that enables faster, more efficient and more economically viable work. The machinery contains satellite navigation, wide grip add-on machinery and tools and irrigation systems that cover an area of 700 hectares. The company also has storage capacity in the form of a silo of 12,000 tonnes and a flooring warehouse that can take 22,000 tonnes. In order to partly round off the process of seed production, they have built a processing centre to process seeds of grains and soybean.