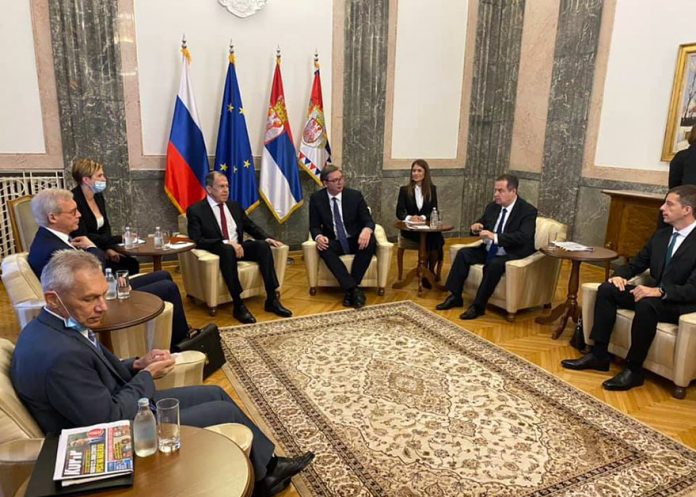 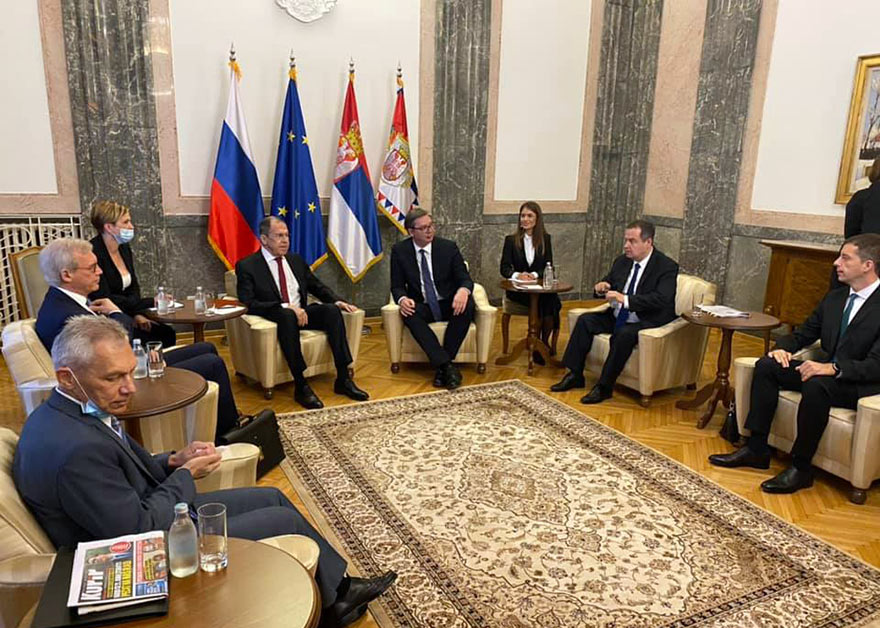 Russian Minister of Foreign Affairs Sergey Lavrov departed Belgrade today from the Nikola Tesla airport, after wrapping up his two-day visit to Serbia.

President of Serbia Aleksandar Vucic met with the Minister of Foreign Affairs of the Russian Federation Sergey Lavrov to discuss bilateral relations and economic cooperation between the two countries, as well as the situation in Kosovo and Metohija.

“We discussed all the important topics. Russia is one of the most important trade partners, with a trade exchange of 3.6 billion dollars marking a year-on-year increase. I believe that we can still do a lot in all spheres of social life to improve and strengthen our strategically set and truly amicable relations. The key topic was our relationship within the international framework and Russia’s support to the integrity of Serbia, as well as the situation in Kosovo and Metohija. We are grateful to our Russian friends for supporting Serbia’s position at all times. I am thankful to Mr Lavrov for his personal commitment,” said President Vučić following the meeting.

Minister of Foreign Affairs of the Russian Federation Sergey Lavrov said that Russia expects the EU, which has the role of mediator in the dialogue between Belgrade and Priština, will not isolate itself from its obligations.

Dacic and Lavrov laid wreaths at the Memorial Cemetery for the Liberators of Belgrade, after the anthems of the Russian Federation and Serbia were sung, and then signed the memorial book.

Serbia And Russia Committed To Further Development of Cooperation

First Deputy Prime Minister and Minister of Foreign Affairs Ivica Dacic stated today that Serbia is firmly committed to the further development of political relations with the Russian Federation on the basis of a strategic partnership.

At a joint press conference with the Minister of Foreign Affairs of the Russian Federation Sergey Lavrov, held after their meeting, Dacic pointed out that both countries are ready to further deepen cooperation in all areas.

He emphasised that Serbia is grateful to the Russian Federation for consistent support for its territorial integrity and sovereignty and our country’s efforts to resolve the issue of Kosovo-Metohija by peaceful means, through dialogue, without blackmail and without favouring one side, especially when it comes to Western partners.

The First Deputy Prime Minister announced that Lavrov also talked about that today with President of Serbia Aleksandar Vucic, to whom he conveyed some Russian assessments of what kind of behaviour can be expected and suggestions for further dialogue on the issue of Kosovo-Metohija.

Lavrov emphasised that the Russian Federation confirmed its readiness to continue supporting Serbia on the Kosovo issue, and reiterated that the main role in resolving that issue is played by UN Security Council Resolution 1244, which, as he assessed, is still applicable.

At the end of the joint press conference, Dacic presented Lavrov with a guitar, while the Minister of Foreign Affairs of the Russian Federation presented the First Deputy Prime Minister with a microphone.

🇷🇺🇷🇸 ‘Music has connected us’: Ivica Dacic presented Sergey Lavrov a guitar made from pear tree, signed ‘To my brother Sergey on his 70th birthday’, and received from his Russian colleague a microphone in return. #Russia #Serbia #Lavrov #Moscow #Belgrade pic.twitter.com/y9lhmlLfke

Russia is currently the world’s third largest gold producer, and its output has been rising year-on-year. Gold is amongst the hottest prospects in Russian...
Read more

Prime Minister Ana Brnabic signed a Free Trade Agreement between Serbia and the Eurasian Union today, extending the list of Serbian products that can...
Read more