Macron Arrives on a Two-Day Visit to Serbia

According to the latest estimates of the Geological Survey of Serbia (GZS), which were made in 2000, Serbia has...
Read more
15 July 2019
Facebook
Twitter
Email

President of the Republic of Serbia Aleksandar Vučić welcomed today at Nikola Tesla Airport French President Emmanuel Macron, who arrived on a two-day visit to our country.

Macron is visiting Serbia in the year that celebrates 180 years since the establishment of diplomatic relations between the two countries.

The presidents of Serbia and France then officially unveiled a plaque on the occasion of the official start of works on the modernisation of the Belgrade airport, which will be carried out by VINCI Airports.

Vučić said that the renewal of friendship between the two countries would not succeed without Macron’s perseverance, energy and the desire of France to return to this region.

He pointed out that the French-Serbian friendship will reach new borders, those that we once had and that we were dreaming of returning.

The President of Serbia pointed out that Serbs are loyal and serious people, respecting their allies, and France can count on Serbia as a reliable friend.

Macron pointed out that he came to Belgrade today to turn a new page, confirm friendship and build new partnerships with Serbia.

He recalled that it had been 18 years since a French President came to Serbia, which is too long.

“Our links to your country are very important,” Macron said, adding that during the visit, the shared past, but also the future, will be discussed.

For this, we need to appreciate and know each other well. I came here to see you, your government, entrepreneurs, but also to talk to the whole Serbian people and to say how much we respect you and cultivate friendship with Serbia, Macron said.

The French President was ceremonially welcomed in front of the Palace of Serbia and was greeted by Prime Minister Ana Brnabić, members of the government, deputies, representatives of parliamentary parties, civil sector, prominent artists and winners of French decorations. 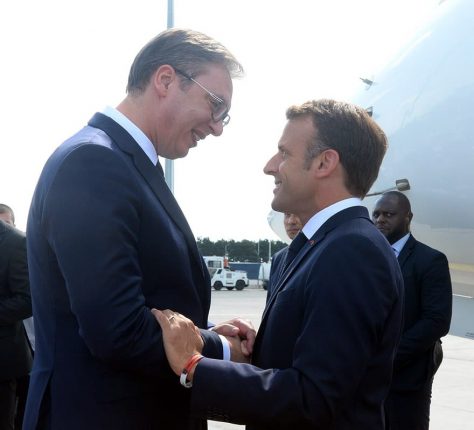 Schedule of the French President’s visit

After the arrival of French President Emmanuel Macron, and the reception at the Nikola Tesla Airport, a ceremony of unveiling a plaque on the occasion of works on the modernisation of the airport carried out by company Vinci Airports will follow around 15:15.

The official reception ceremony is set to take place at 16:00 in front of the Palace of Serbia, after which the two presidents will meet around 16:15.

At 16:40, a ceremonial exchange of signed bilateral documents is envisaged in the presence of the two presidents.

After that, at 16:45, Serbian President Aleksandar Vucic and French President Emmanuel Macron will give statements to the press.

A ceremony of laying wreaths at the Monument to the Defenders of Belgrade from 1914-1918 is set to take place at 18:20, followed by the laying of flowers to the tomb of Milunka Savic at the Alley of the Great at Belgrade’s New Cemetery at 18:30.

On 16 July, the second day of the visit, at 9:30, the two presidents will speak with students from the Regional Office for Youth Cooperation, according to a press release from the Office of Media Relations of the President of the Republic of Serbia.