The Nikola Tesla Museum, founded as the first technical museum in Yugoslavia and the only one that preserves the...
Read more
31 March 2016
Facebook
Twitter
Email

In the presence of a large number of guests, H.E. French Ambassador Christine Moro, H.E. Belgian Ambassador Leo D’aes, and Ms Chantal Moreno, director of the regional office of CE Europe MOF, jointly organised a reception at the Embassy of France to commemorate the successful completion of the Month of Francophonie.

The embassies of Francophone countries and their partners provided a rich and varied cultural programme: songs, music, literature, comics, poetry, theatre, film etc. However, at the centre of focus was politically engaged Francophonie: freedom of expression in newspaper cartoons, tissues of ethnicity in literature and comics, economic aspects of the strategies of the French language, in an effort to open up French-speaking markets to Serbian companies.

Speaking on this occasion, H.E. Moro conveyed the message of MOF Secretary-General Michael Jean calling on young people to take advantage of what Francophonie can offer Serbia. The reception was also attended by Serbian Culture Minister Ivan Tasovac. 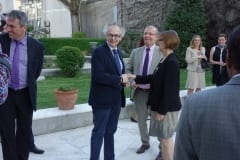 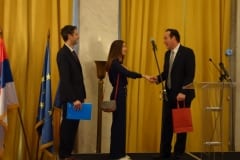 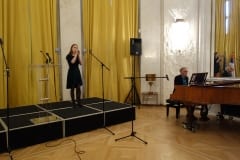