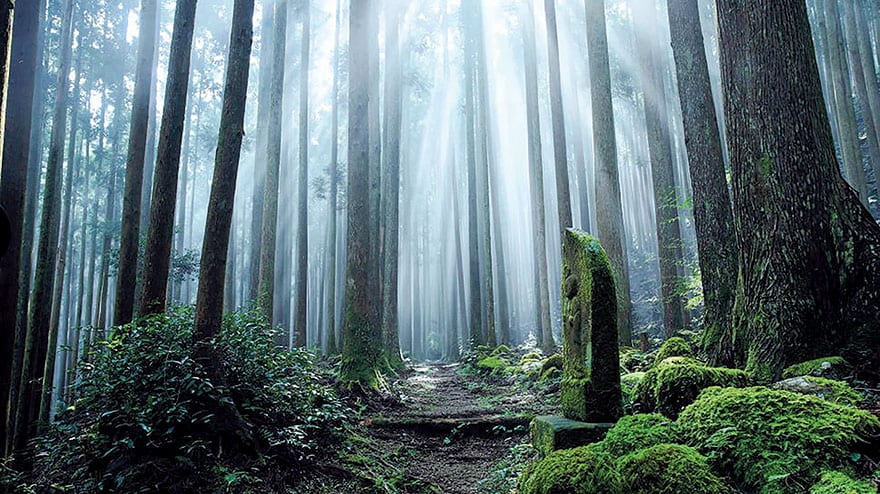 Shiretoko, a natural heritage site registered only in July 2005, is considered to be the last pristine wilderness remaining in Japan. It is a long narrow peninsula located in north-eastern Hokkaido. The volcanic Shiretoko mountain range runs down the centre of the peninsula and includes the highest peak of the range, Mt. Rausu (1,661m above sea level) and the active volcano, Iouyama. The Sea of Okhotsk lies on the western side of the range and the Nemuro Straits on the eastern side. The coastline cliffs facing the Sea of Okhotsk rise up more than 100m.

The salmon and trout that breed in the sea off Shiretoko are an important food resource supporting the terrestrial ecosystem with rare birds such as Blakiston’s fish owl, Steller’s sea eagle and the white-tailed sea eagle, as well as brown bears.

The core temple, Horyu-ji, was built in the year 607 by Shotoku Taishi (574-622), a politician of that time. Thirty-eight national treasures and 151 important cultural assets are preserved in the temple’s vast premises, and it is a treasure house of Japanese art; at the same time, it is also known as the oldest wooden structure in the world.

Kumano Nachi Taisha is one of the three Kumano shrines, situated a few kilometres inland from the coastal hot spring resort of Katsuura. The shrine is part of a large complex of neighbouring religious sites that exemplify the fusion of Buddhist and Shinto influences that is particular to the Kumano region. The site also boasts the tallest waterfall in Japan.

The veneration of the Kumano shrines as holy sites of Shintoism predates Buddhism’s introduction to Japan in the mid 6th century.

Directly beside the eminent shrine is the Buddhist temple Seigantoji. The buildings of both the shrine and the temple are impressive, and among the buildings of Seigantoji, there is a three-storey pagoda.

A short distance from Seigantoji and Nachi Taisha is the 133-metre waterfall Nachi no Taki. The tallest waterfall in Japan, it was the original religious site in the area.

Kumano City is located in Mie Prefecture, about 20 kilometres from the Wakayama border, along the former Iseji pilgrimage route, which connected the Kumano shrines with Ise. Only isolated sections of the route have been preserved to this date.

Among them is the Matsumoto Pass trail in Kumano City. About a kilometre south of Kumano city centre stands Hana no Iwaya Shrine. According to legend, this ancient shrine is the location of the grave of Izanami, the deity who created the earth together with her husband Izanagi. The shrine is believed to be so old that its foundation even precedes the three Kumano shrines.

On the shrine grounds, there is a massive, sacred rock that stands 45 metres high which is believed to have been revered by the pre-historic Japanese.

Kerama Islands is located in the southwest part of Okinawa, which is a group of 22 islands. Among these islands, only four are inhabited (Tokashiki Island, Zamami Island, Aka Island, and Geruma Island). Its location played a significant contribution to Japanese history in the past. It became a staging area for the assault on Okinawa.

It is also the best place to go whale watching in Japan. The island is home to many wandering whales which have an annual migration, as this is where they give birth and raise their offspring. This provides tourists with a chance to conveniently watch the lumbering whales.

Not far from Cape Shionomisaki and connected to the mainland by a large modern bridge is Oshima Island. The island is home to two small museums of foreign background and more coastal scenery.

The Turkish Memorial Museum is dedicated to an accident at sea in 1890 when a Turkish ship crashed on Oshima’s shores. Survivors from the ship were cared for by townspeople until they could be safely sent back to Turkey. The incident marks the beginning of a deep friendship between Japan and Turkey.

Oshima’s second foreign-inspired museum is the Japan-U. S. Friendship Museum, which commemorates the arrival of two American trade ships to Oshima in 1791. The event is said to be the first occurrence of a “friendly” relationship between the two countries.

On the mainland, a series of rocks dot the coastline leading out towards Oshima Island. A legend claims that these rocks, called Hashigui-iwa, (meaning “bridge pillar rocks”) were created by the famous monk Kobo Daishi, after being challenged by a monster to build a bridge across the sea.

The centuries-old Itsukushima Shrine on Miyajima is the source of both the island’s fame and its name. Formally named Itsukushima, the island is more popularly known as “Miyajima”, literally “shrine island” in Japanese.

The shrine is known worldwide for its iconic “floating” torii gate. The shrine and its torii gate are unique for being built over water, seemingly floating in the sea during high tide. The shrine complex consists of multiple buildings, including a prayer hall, the main hall and a noh theatre stage, which are connected by boardwalks and supported by pillars above the sea.

It has a long history as a holy site of Shinto. The island’s highest peak, Mount Misen, was worshipped by local people as early as the 6th century. In 1168, Taira no Kiyomori, the most powerful man in Japan during the end of the Heian Period, selected the island as the site of his clan’s family shrine and built Itsukushima Shrine.

Toshogu is where Ieyasu Tokugawa (ruling from 1603 to 1605) is enshrined; he was the first shogun of the Edo Shogunate, which flourished between the 17th and 19th centuries. As many as 127,000 craftsmen were involved in constructing the shrine, using the highest level of technology available at the time. The two-story “Yomei-mon Gate”, decorated with brilliant colours and over 500 sculptures, is particularly famous. It is also called “Higurashi-mon (sunset gate)” because people spend all day long gazing at its beauty.

One of the sculptures, the “Three Monkeys”, is famous throughout the world for the “see no evil, hear no evil and speak no evil” poses. The carved monkeys covering their eyes, ears and mouth, respectively, were inspired by the Buddhist teaching that if we do not hear, see or speak evil, we ourselves shall be spared from evil.

The Genbaku Dome is the ruin of the former Hiroshima Prefectural Industrial Promotion Hall that was destroyed when the first nuclear weapon/atomic bomb in human history was dropped by an American air force bomber on 6th August 1945.

Because the atomic blast was almost directly above this spot, the walls of the building were partially spared from destruction, and the characteristic form of the building remained with the iron frame of the dome. This building representing Hiroshima, the first city to fall victim to nuclear bombing is registered as a World Heritage site as a symbol of prayer for permanent world peace and the elimination of all nuclear weapons.

It is Japan’s most famous “hiraniwa” (flat garden void of hills or ponds) and reveals the stunning simplicity and harmony of the principles of Zen meditation.

Ryoan-Ji Temple is famous for its mysterious rock garden, the most celebrated in Japan, which defies attempts at explanation. Enclosed by an earthen wall, fifteen carefully placed rocks seem to drift in a sea of raked white gravel. From whatever angle you view the garden, you can never see all fifteen stones.

The temple was built in 1450 by Daimyo Hosokawa Katsumoto (1561- 1628), but no one knows for certain when the rock garden was made, who designed it, or what the designer’s intentions were. So what does the rock garden signify? You can only find out by seeing it for yourself.

Embassy of Egypt in Serbia headed by...
Read more

Mitsubishi Corporation is developing and operating businesses in line with its latest management plan, “Midterm Corporate Strategy 2021”. This strategy represents the basis for the company’s sustainable growth while responding to global economic and geopolitical trends, which are increasingly compelling companies to evolve their business models
Read more

On May 22, 2020, the United States Government announced an additional $20.3 million in assistance to the Government of...
Read more

The investment in the automotive sector of Serbia in the last year amounts to 790 million euros Despite the crisis...
Read more

Nestlé joined over 150 major multinationals in urging governments around the world to align their COVID-19 economic aid and...
Read more