Courage Is To Work, And Not To Whine

Europa Nosta will next year celebrate the...
Read more

“Germany is somehow rather present, as there are so many personal relations, experiences and a very high professional knowledge about what’s going on there – and not only in the cultural sphere” says Frank Baumann, director of the Goethe-Institut in Belgrade

The Goethe-Institut Belgrade is a visibly prominent institution in the everyday life of Serbian culture. The Goethe-Institut achieves its mission of bringing the culture of Germany, and thus Germany itself, closer to the Serbian people through its attractive programmes of the highest quality. That’s why it was interesting for us to find out from director Frank Baumann about – primarily – the future conceptual direction of Goethe-Institut Belgrade, which he heads, but also his thoughts about some important issues related to Serbian culture.

Autumn marks the start of a new working season. Which of the Goethe-Institut’s events and projects from the previous season would you single out?

– The main attraction was the huge exhibition of contemporary art from Germany, which took place at the Museum of Contemporary Art in Belgrade earlier this year. More than 400 examples of fine art from six decades were exhibited on three floors, with more than 7,000 visitors taking the chance to see this unique exhibition. Second, and no less successful, is the first Films First Young Director’s Academy for Southeast Europe, which is still ongoing.

The award-winning feature film debuts of our participants are now starting to enter international festivals. And we are proud to be part of their success. Third, I’d like to mention our documentary film about Serbian Roma Hip Hop group Gipsy Mafia. That film was shot in Germany, Zrenjanin, France and Spain, and has been highly rated by audiences and critics alike. It also received a special mention from this year’s BELDOCS jury.

How does the programme of the Goethe-Institut in Serbia differ from those prepared by your Goethe-Institute colleagues in other countries around the world?

– In general, we have similar policies and aims worldwide. It’s a network of 170 branch offices, all offering German language programmes, most with an information department and library, and of course dealing with the planning and implementation of specific cultural programmes. We do this in cooperation with Serbian partners.

Serbia is different in the sense that you don’t really have to “present” our country here. Germany is somehow rather present, as there are so many personal relations, experiences and very high professional knowledge about what’s going on there – and not only in the cultural sphere.

How would you evaluate the fact that the Serbian Ministry of Culture and Information favours tradition, such as the bygone Nemanjić culture?

– This is a political question, isn’t it? Nothing speaks against dealing with regional traditions; it’s a way of understanding how things used to be at a certain time in a certain place. It’s interesting, perhaps instructive, and therefore useful. Of course, the concept of “nation” isn’t as old as some people would like it to be, just as the idea of dividing a national history into heroes and traitors isn’t really sufficient if you take your audience seriously. I’m not saying this happened here, because I’m not familiar with the example you mentioned. But I see a certain threat wherever culture and history are presented (and financed) “top-down”. 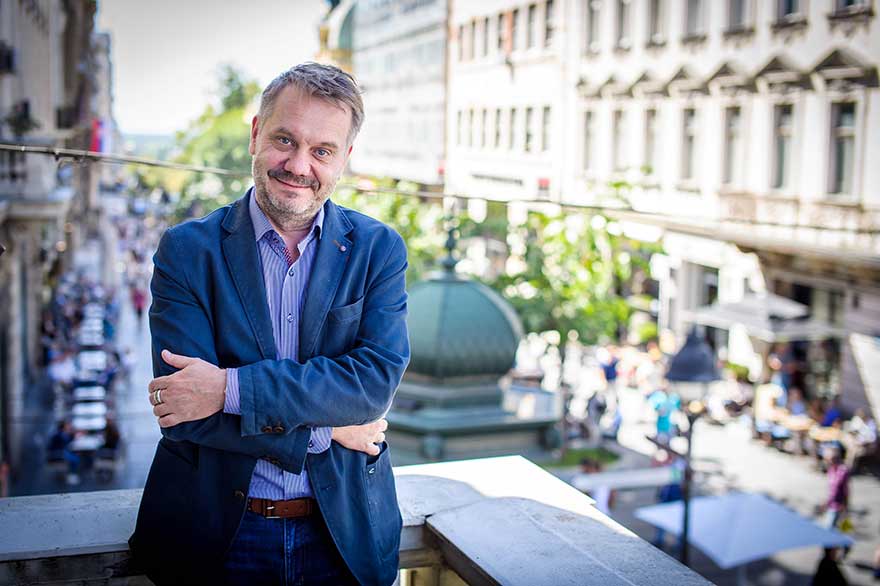 National traditions on display, the celebration of “outstanding” historical figures and similar historical approaches are, for me, more a method and not an aim. Looking back is, of course, essential – just thinking about Germany and the darker sides of its history. But we still try to focus on the future. Asking questions: where are we heading, which ways are open to our societies, which way leads to a better future for the majority of people, and which direction is a dead-end road. And what about the planet, how we treat our environment, which mobility systems will work longterm, what is the future of architecture, do we have alternatives to the capitalist exploitation of labour and natural resources, is the dogma of constant growth something we should overcome; and what about our total transparency and big data etc., you name it.

What I want to say is that the Goethe- Institut tries to avoid an overly narrow understanding of the word “culture”. You cannot deal with today’s tricky circumstances of life just through stage performances or academic roundtables. We are currently witnessing a crisis of Western democracies. Populist loudmouths are all over. Culture cannot and should not influence so many people’s minds in the simple, perfidious way that they do, because the culture is as complex as reality itself. However, I’m sure that human culture and human values (and this, of course, includes classic spheres like the traditions of music, language and literature) will remain when all the hate speakers and nationalist agitators have, hopefully, long gone.

The international Frankfurt Book Fair is set to start soon and will this year also include Serbia’s participation. Which authors or books would you like to see presented at Serbia’s stand?

– Well, more or less the same as I’d like to find at all other stands – some classics, some surprises, some serious business and some rock ’n’ roll. In our case, the names of Aleksandar Tišma, Danilo Kiš, Ivo Andrić, Ivan Ivanji, Đorđe Lebović, Želimir Žilnik, Jelena Volić, Branko Rosić and Vladimir Arsenijević, among many others. And, yes, not quite new, but still fresh, the fantastic EX-YU Rock Encyclopaedia of Petar Janjatović.

The Goethe-Institut tries to avoid an overly narrow understanding of the word “culture”. You cannot deal with today’s tricky circumstances of life just through stage performances or academic round-tables

How would you assess the activities of the German Language and Literature Department of Belgrade University’s Faculty of Philology?

– We are working on similar tasks and duties. Demand for the German language is obviously higher than the demand for experts on German literature, and the reasons for that are obviously not to be found within the faculty. Nonetheless, I think teachers in Serbia should be at least better paid, in order to make these studies more attractive again.

That’s easier said than done, and also nothing that a faculty can achieve. It’s related to the whole society and economic system. The quality of teaching, as far as I can say, has always been at that very high level. It would just be good if all those skills, knowledge and competence could be kept for the benefit of this country and its people. Well, Germany needs a lot of German teachers as well these days. Quoting Mr Goethe one time, if that’s allowed, “two souls live, alas, in my breast”.

I would presume that the Goethe-Institut, like all other state institutions, has a limited budget. How do you manage to accomplish all that you’ve planned while remaining within the limits of the funds allocated? Perhaps your example could serve as instructive advice to the directors of cultural institutions in Serbia, for whom money represents the biggest problem hindering their operations.

– I’m not sure that money is the biggest problem for my colleagues who hold similar positions. Budgets are always limited, that’s true. But that doesn’t automatically present us with a problem; it’s more of a situation. As the German saying goes, “the blanket is always too short”. The Goethe-Institut is basically financed by the German Ministry of Foreign Affairs, but we are constantly striving to allocate additional budgets sourced from third parties. We are sometimes successful with applications for EU tenders or grants, and sometimes not. We apply for grants from private foundations in Germany if the calls fit into our programme policy. We apply – together with our French colleagues – for budget allocations from the annual French-German Cultural Fund. And so on. I remember a senior colleague years ago instructing me, as a young trainee, that I “should never, ever skip a promising project just because I was afraid of not being able to finance it”. I still follow his advice from time to time.