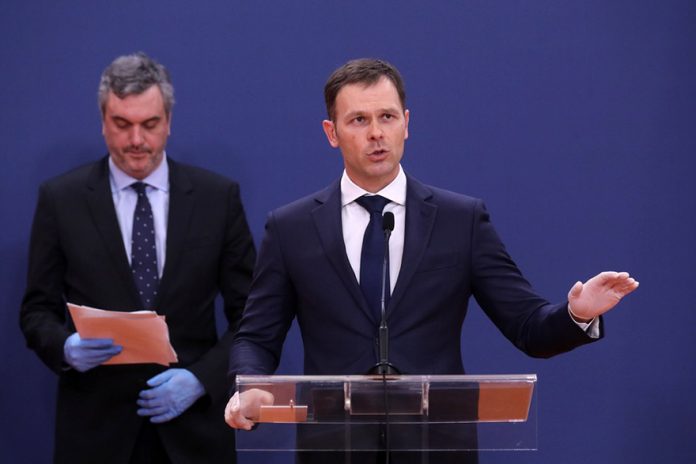 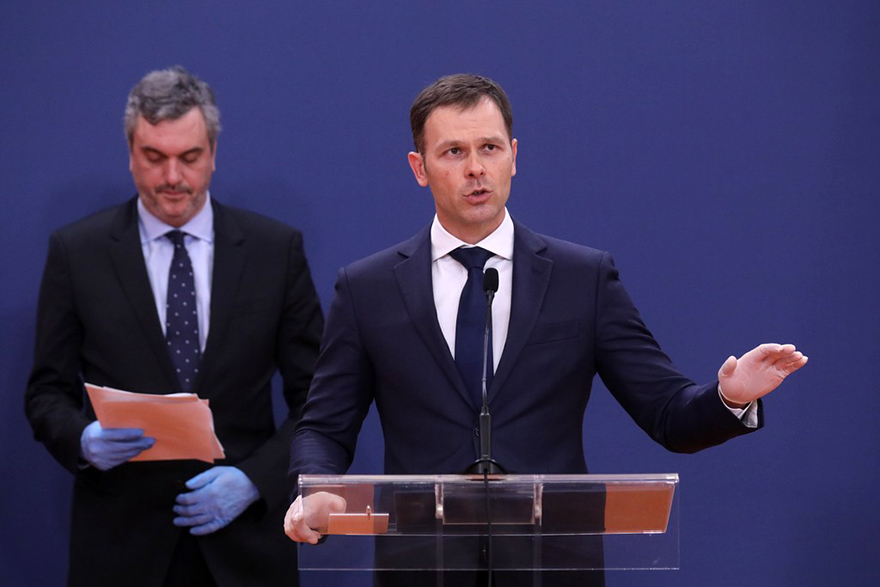 Minister of Finance Siniša Mali and President of the Serbian Chamber of Commerce Marko Čadež presented a package of economic measures to mitigate effects of the coronavirus epidemic on the economy, worth €5.1 billion.

Minister Mali said that these are comprehensive measures that the state has been preparing in the past ten days and that their main objective is to preserve the employment levels acquired and to help the companies most affected by the crisis caused by the coronavirus epidemic.

Precisely for this reason, the state decided to assume the burden of this crisis.

The set of economic measures includes a total of nine measures, with an estimated effect of RSD 608.3 billion.

Mali said that all Serbian citizens of legal age will receive direct assistance in the amount of €100, for which about RSD 70 billion will be set aside from the state budget and added that this is a great sign of support and desire to bring a dose of optimism.

He explained that the announced programme will be financed in three ways: from the substantial budgetary reserves, from budget appropriations, as well as from the domestic and international capital markets.

The government remains firm in its position not to cut wages in the public sector, lay off workers or reduce pensions as there is enough money in the budget, he said, adding that the government will strive to respect all its obligations towards the private sector.

We go with massive liquidity support for our entire system, the private sector primarily, for which we will allocate €2.2 billion. We will invest €200 million through a development fund for subsidised, cheap loans, with one per cent interest for entrepreneurs, micro, small, medium-sized enterprises, farms and cooperatives, he said.

Mali pointed out that the state is also planning a guarantee scheme that is negotiated with commercial banks in the amount of €2 billion.

There will be loans backed by the state, i.e. loans in which banks do not have high risk, which is important because entrepreneurs, micro, small and medium-sized enterprises will also receive this money for working capital, for liquidity, he said.

The minister announced that the state will pay entrepreneurs, sole traders, micro, small and medium-sized enterprises three minimum wages to help them overcome the crisis caused by the coronavirus.

He underlined that this is one of the measures of the state, adding that the state will pay directly to the account a little more than RSD 90,000, or €750, to each employee of these companies.

In addition to this, the state also proposes support in the amount of 50 per cent of the minimum wage for employees of large enterprises who have received a decision on termination of work, because according to the Labour Law, when a decision on termination of work is given in large enterprises, the employer has an obligation to pay 60 per cent of the average gross earnings over the past 12 months.

There are around 900,000 people working in the sector of micro, small and medium-sized enterprises and entrepreneurs.

The Minister of Finance stated that within the framework of the tax policy, the state has adopted three measures to support the economy, which mean that it will bear the costs of the enterprises in the amount of €1.3 billion.

Mali stated that these measures are: deferral of payment of payroll taxes and contributions for all private companies during the state of emergency, and for a minimum of three months, deferral of payment of income tax for the second quarter of 2020 and exemption from VAT for all those who donate and deal with donations.

He explained that the state will assume the payment of taxes and contributions on wages and thus it wants to encourage companies to keep all their workers and not lay off anyone.

We give all private companies the ability to pay these obligations in 24 equal monthly instalments, but not before January 2021. We show strength by assuming the €1.3 billion in liabilities that companies would need to pay, Mali concluded.

Minister of Finance Sinisa Mali and US Ambassador to Serbia Anthony Godfrey signed the Interstate Agreement on Encouraging Investments, which is a precondition for...
Read more

Prime Minister Ana Brnabic pointed out today that there will be enough vaccines available for all citizens who want to be vaccinated against coronavirus. During...
Read more
Cord MagazineLeaders Meeting Point