Deputy Head of the OSCE Mission to...
Read more

Serbia still has many children from vulnerable...
Read more

The move means 10 ambassadors — including those of Germany and the United States — are now just one...
Read more
28 August 2019
Facebook
Twitter
Email

Prime Minister Ana Brnabic assessed today that Serbia and Slovenia have good political and economic relations, and expressed her gratitude to this country for its continued support to the European integration of Serbia.

Brnabic underlined that Serbia and Slovenia do not have many open issues and added that she discussed today with Prime Minister of Slovenia Marjan Sarec the date for the fifth joint session of the governments of the two countries.

The two officials also examined the possibility of holding a joint economic forum, as the economic cooperation between the two countries records a continuous growth.

The Slovenian economy is, as she pointed out, one of Serbia’s most important economic partners and one of the largest investors with more than €1 billion in investments, noting that 1,600 Slovenian companies operate successfully in Serbia. 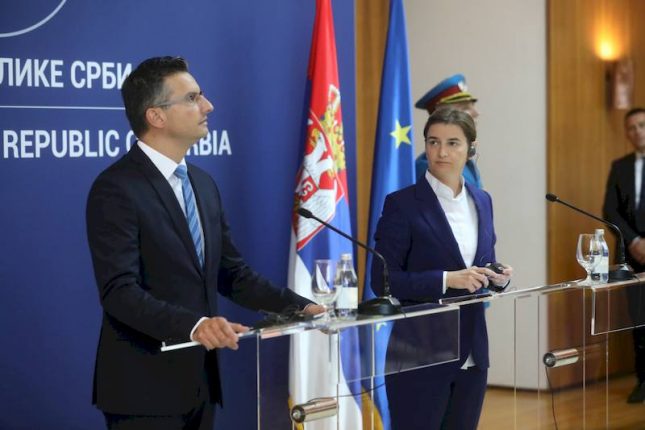 Brnabic stated that Slovenia has a very strong and developed sector of small, micro and medium-sized enterprises so that the experience of that country in this area would be very significant for Serbia.

Related: Prime Minister of Slovenia on an official visit to Serbia

She said she expects Serbian investments in Slovenia to grow, which currently exceed €300 million, noting that Nectar, Comtrade, Delta and other companies operate in Slovenia.

According to her, the two countries can achieve much together and through cooperation in the field of blockchain.

Brnabic pointed to an increase in tourist traffic from Slovenia to Serbia, stating that in 2018, the number of Slovenian tourist in Serbia increased by 10.7 per cent compared to 2017.

Sarec said that Serbia deserves to become part of the family of European countries, adding that although the climate in the EU is not fully prone to enlargement, Ljubljana wants to talk about it.

The European path depends on many factors and the enlargement process needs to be launched as an incentive, and if this is recognised as an interest of the EU, then it is a question of the future, Sarec concluded.

Slovenia ranks as one of the least restrictive OECD-member countries for FDI, doubling its FDI stock in the last ten years. It has a...
Read more