Last year’s 30th Belgrade Marathon broke all previous records on its new course – 7,000 participants from 70 countries – while beautifying the event with selected words were legends of world sport Carl Lewis, Roza Mota, Galina Chistyakova, Bob Beamon, Mike Powell, Lasse Virén, Kevin Young and Javier Sotomayor. Not even the Olympic Games has so many “ambassadors” of this format have no Olympic Games

Although last year’s 30th Belgrade marathon, according to Dejan Nikolić, outdid itself, preparations are underway to ensure that – despite the problems the organiser traditionally faces – Belgraders again enjoy running and a festive atmosphere on 21st April.

It could be expected that, after staging 30 successful events, your problems would remain behind you?

– Unfortunately, that’s not the case. We’ve had problems every year, and this year we also have a completely new one: the appearance of unfair competition. The Athletics Association of Serbia has announced its “first, real marathon” for this autumn, although athletics associations don’t deal with the organising of marathons in any serious country, and although no big city has two marathons – not London, not Berlin and not New York… This impacts on finances confuse both existing and potential sponsors, among other reasons because we were left without agreed financial support from the Ministry of Sports for the 30th marathon. Organising a marathon, including Belgrade’s, is a construction job.

We have to date constructed 30 buildings, each special in some way, and we are trying to make this “uniqueness” with new contents to enrich the event and to improve communication and cooperation with domestic and foreign runners. This is not easy, because a large number of marathons are held during a relatively short period of time.

It is not easy to fight with competition in countries that have stronger economies and powerful, multi-year sponsors. We, unfortunately, haven’t entered a single year with stable finances, not to mention the ‘90s, when it was difficult for everyone, but the last ten years have been just as tough for us because others cause problems for us, which in turn poses a threat to Belgrade and Serbia.

The Belgrade Marathon is an event of special importance for Belgrade – this is according to the decision of the Belgrade City Assembly, and not us – and it should be supported and protected, and we are trying to be successful, both us and our partner in the City of Belgrade.

What have you prepared for this year? Do you have promoters yet?

– Promoters are extremely important for this kind of event and we pay great attention to that segment. We are talking with four great athletes who have marked “the queen of sports”. They all have lots of obligations, but one of them will come to the 31st Belgrade Marathon. 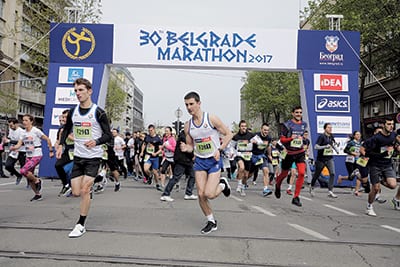 One of the media and programming themes will be 25th anniversary of the last visit to Belgrade of Fred Lebow, founder of the New York Marathon and the World Association of Marathons and Street Races, and we link that to two things – the trophy bearing his name that we have been awarded since 1994, when he passed away. He was last in Belgrade in 1993, when he ran the half-marathon and sent a message to the world to “Come to Belgrade.

The marathon has no borders”, and during that year, as well as the previous and the next, the Belgrade Marathon was the only international event to happen in Belgrade, as UN Security Council sanctions were in force. His message proved to be a powerful contribution to the 6th Belgrade Marathon receiving great media support throughout the world via satellite TV programmes and appearing on the front page of the New York Times, in an article authored by Fred Lebow in which he conveyed a message of peace sent from Belgrade.

What does that partnership consist of?

– This year’s Belgrade Marathon will have the tagline “One Belt – One Road”, as the modern-day continuation of the ancient Silk Road. We received approval for that and will be the first marathon in the world to promote this. This is important to us because we are establishing cooperation with several Chinese marathons, especially Beijing’s, as well as with tour operators who’ve shown great interest in bringing runners from China to Belgrade.

At this year’s marathon, we will have the first group of runners from China, who are to be brought by ‘ZX-Tour’, China’s largest tour operator specialising for racing and marathon tourism, which for this occasion is preparing a joint program for the Belgrade and London marathons. Cooperation with such a big organisation, which has the ability to sell everything we offer, is an extraordinary advancement. China is today the world’s biggest market when it comes to running. Until recently that was America, with 35 million runners, but China has now surpassed that number and has an estimated 40+ million passionate marathon runners.

Unfair competition has appeared. The Athletics Association of Serbia has announced its “first, real marathon” for this autumn, although athletics associations don’t deal with the organising of marathons in any serious country, and although no big city has two marathons – not London, not Berlin and not New York…

What new “breakthroughs” have you made on the domestic front?

– We are continuing to strive to extend the concept of our event, which consists of the 5km Fun Run, half-marathon and marathon, attracting even more participants in special categories, such as people with special needs who, through the Fun Run, see their entry into everyday life, as well as participants in the “Mama Fit” programme, in which we expect the participation of between 300 and 400 mothers and pregnant ladies.

This year we will also be joined by the largest number of humanitarian organisations to date, and on this occasion I will highlight two national campaigns: “Cancer is curable”, which is being implemented by the Ministry of Health and RTS, under the slogan “Activate yourself” and the campaign “Run for Healthy Lungs”, which is sponsored by the Ministry Health, Youth and Sports, and participants from the Secretariat for Health of the City of Belgrade, the Institute for Health Care of the University of Belgrade and the City Institute for Pulmonary Diseases and Tuberculosis. Among those who have found the ideal platform to promote health, running and charity in the Belgrade Marathon is our oldest partner in humanitarian programmes, CorD magazine.

How much does the Belgrade Marathon cost?

– If we were to compile a budget as it should be done, we could calculate the total value of the marathon. We haven’t done it like that though. Everything that we secure in terms of monetary funding and support from sponsors, and support in the form of services and goods, which we also secure for our marketing activities, would be part of the budget, as would the services and support of the City through communal enterprises.

Whatever the case, it costs a lot, but I am convinced that it costs much less than the contribution we give back to the city through the overnight stays of the 3,000 guests from abroad who came to Belgrade last year, spent a few days here and paid for their accommodation, food, every service they used, everything they bought, and paid VAT or tax, not to mention the total social benefits of the city and the state that have reached €123 million over the last twenty years, and that’s only for the commercial advantage of PR in the country and abroad, so without calculating gains from tourism movements and humanitarian activities – concludes Nikolić.