Marking the long-term cooperation between the Kingdom of Norway and the Republic of Serbia within the project “Norway for you”, the President of Serbia, Aleksandar Vučić and the Ambassador of Norway H.E. Arne Sanes Bjornstad confirmed the importance of the friendship between the two countries

During the event held today at the Center for Culture and Arts in Aleksinac, marking the long-term cooperation between Norway and Serbia within the project Norway for you, the President of Serbia, Aleksandar Vučić and the Ambassador of Norway H.E. Arne Sanes Bjornstad confirmed the importance of the friendship between the two countries and expressed the belief that the future cooperation would bring multiple benefits for the citizens of Serbia.

On this occasion, Minister of Labor, Employment, Veterans and Social Affairs Zoran Djordjević, Minister of State Administration and Local Government Branko Ružić, as well as numerous mayors and presidents of the municipalities that are part of the project, exchanged ideas on further areas of assistance and cooperation and recalled the relevant projects which the Kingdom of Norway financed in Serbia with over 250 million euros during two decades.

After reminding that Norway stood by Serbia during challenging moments, after the floods that Serbia suffered in May 2014 and others, President of the Republic of Serbia, Aleksandar Vučić, pointed out that there are multiple benefits from the help this Scandinavian country provides. “The importance of Norway’s support to our country is not only finance related, however significant it is; What matters is that it teaches us how to better make use the funds, how to spend them transparently, to respect the procedures and money we use wisely,” Vučić said. 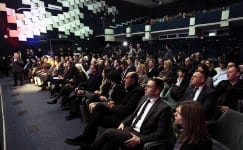 Among the projects that the Kingdom of Norway currently finances in Serbia is the “Norway for you” project, worth 4.27 million euros, which provides the opportunity to help 91 local self-government from the third and fourth development groups. In line with the focus of this project towards increasing the employment opportunities of vulnerable groups, improving social cohesion and inclusion, as well as improving infrastructure, the Ambassador of the Kingdom of Norway to Serbia, Arne Sanes Bjornstad, emphasized the focus of the ideas coming from the representatives of municipalities and cities, helped their implementation.

“In Serbia, I could witness positive changes in the last decade or two, but we realise that there are still parts of the country lagging behind for more developed cities and municipalities. With the project “Norway for you”we aim to support small and less developed communities to improve the quality of life in line with the needs they have,” the ambassador said, adding that Norway’s goal is to strengthen such communities so that they can help themselves, and to reach a steady development.

Following the presentation of examples of good practices, a series of talks on possible forms of support, as well as potentials for cooperation, were attended by ministers Ružić and Đorđević, in addition to the president, ambassadors and heads of local self-government.

“The leadership with the support of the Kingdom of Norway during the past year has achieved excellent results in the fight against the grey economy through the project” Tell NO Work on the Black,” said Minister Djordjević. “The Ministry of Labor, Employment, Veterans’ Affairs and Social Affairs will continue to work on improving the position and rights of workers, and creating a more favourable climate for the arrival of new investors, and we count on the Kingdom of Norway as a reliable partner and friend of our country to help us.”

Minister of State Administration and Local Self-Government Branko Ružić pointed out that the project “Norway for you” was directed to the needs of the local community, and invited local governments to use every kind of assistance they are providing because it will contribute to a better life of citizens. “The Kingdom of Norway is one of the donors on various projects, but this is in line with the needs of cities and municipalities, such as increasing employment, social cohesion and greater security of e-government,” Ružić said.

Local self-governments covered by the project Norway For You