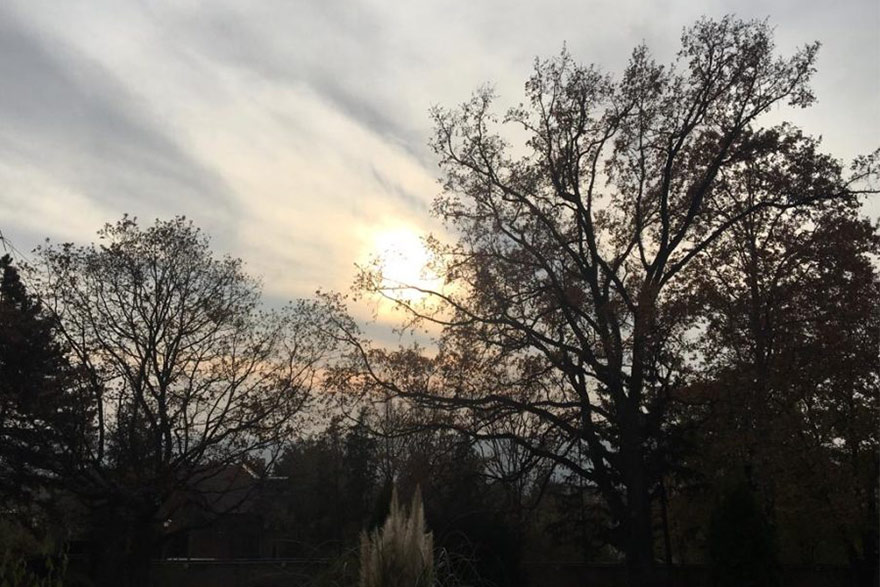 I’m lucky enough to look out of my window in Belgrade at trees and sky. Sadly though that view is often rather murky, with visibility limited to the great oak trees at the end of my garden.

One glimpse of a silver lining in the metaphorical clouds is the growing political, media and public attention focused on air quality.

We are all more aware than ever of changing pollution levels as we follow near real time data on our mobile phones and, thanks to scientific research, we better understand the consequences for our health.

Serbia is not alone in facing challenges with air pollution.   Many modern cities around the world are tackling similar problems.

Not so long ago London was infamous for its smog, a lethal mix of air pollution and fog that hung over the city like a deathly blanket. London smog was responsible for thousands of deaths each year.  From the mid 1950s on though, Clean Air Acts started helping Londoners breathe more easily.

Air quality in present day London is far from perfect, but it is a great improvement upon even twenty or thirty years ago.   It has taken several decades of changing legislation, policies, attitudes and behaviour for us literally to clear the air.

There are a number of reasons for poor air quality – and the UK has not by any means solved them all.  In fact, despite the massive improvements, air pollution is still reckoned to be the greatest environmental hazard for public health in our cities.  But these days the problem has more to do with the nitrous oxides of traffic pollution than with the particulates produced by incomplete combustion that hang in the air and cover surfaces with a fine gritty dust.  Unfortunately Belgrade still has both.

Industrial pollution, vehicle emissions, domestic and other heating all contribute to the problem in this region.  It’s much more serious of course than a nice view spoilt by murky air.

We feel the effects of air pollution when we wake up with itchy eyes or a sore throat, or when we become breathless walking, running or riding a bike on a ‘bad air day’.

I remember the cosy open fires of my childhood and supper cooked on a coal fired range.  But I also remember long months when I couldn’t shake off bronchitis, and had to sleep with an old fashioned ‘night light’ to help me breathe.

The World Health Organisation has blamed air pollution for more than 6,500 premature deaths each year in Serbia. They highlighted the particular vulnerability of children and the elderly to the harmful effects of air pollution. They also pointed out the significant economic costs.

It’s worth remembering too neither air pollution, nor its damaging effects on health or the natural environment, stop at borders. So, just as coal fired power generation in Serbia will have an effect upon health, and healthcare costs, in neighbouring countries,  Serbia will suffer the effects of air pollution originating elsewhere in the region.

On a topical note, my Embassy recently sponsored a review of scientific literature researching the relationship between air quality and the outcome of infection with the COVID-19 coronavirus.   The statistics are stark. 22 scientific studies from around the world have confirmed that exposure to poor air quality significantly worsens the consequences of catching COVID-19.

Another silver lining to the air pollution cloud is that this is a problem that can be solved. Not overnight but with cooperation between government, local authorities, business, media, education, civil society organisations – and all of us as individuals.

Recognising a problem and talking about it is an essential first step to solving it.

Tackling poor air quality goes hand in hand with tackling the dangerous climate change threatening our planet.  Many of the greenhouse gases that contribute to climate change are also sources of air pollution.  If we build a greener future we will breathe cleaner air.

We need cleaner and greener heating, transport and power generation.

That means change for individuals and communities.  But as we are now seeing in the UK, new technologies mean new jobs as well as a better quality of life.  We are also now finding that investing in greener, renewable energy can bring down its costs more quickly than expected.  Amazingly, solar and onshore wind are now proving to be the cheapest source of new bulk power in many major economies.

The British Prime Minister, Boris Johnson has just announced a Ten Point Plan for a Green Industrial Revolution that promises greener energy, greener transport, greener finance, and a quarter of a million new jobs. Hopefully we really will be able to ‘build back better’ with a greener economic model providing the key to future growth.

I passed on to the President a letter from Boris Johnson, with the leaders of France, Italy, Chile, and the UN Secretary General, inviting Serbia to consider making a major commitment to reducing carbon emissions or to set out an ambitious plan for transition to a greener economy. I very much hope that this will be possible and am optimistic about Serbia’s emerging commitment to a greener future.

Over the past few weeks I have discussed climate change and the environment with the President, Prime Minister, and other Serbian Government ministers. All confirmed that this will be an important priority in the coming months and years.

I look forward to working together on climate change and environmental protection between now and the major UN Climate Change conference, COP 26, next autumn.  The meeting will take place in Glasgow, a city close to my heart, but hardly recognisable now from the soot blackened streets I used to visit as a child.

Governments alone cannot solve the titanic environmental problems facing the world.  All of us have a vital part to play.

It’s good that newspapers here are campaigning for cleaner air.  The more that we, as ordinary citizens understand the problem and can hold governments and legislators to account for delivering change, the better.

As a diplomat my job is to be, well, diplomatic. It is generally more effective to keep frank discussions and advice to your host Government behind closed doors, and I usually try to do that.

But on this issue where our interests are so close, private and public messaging have to be the same.  There is increasing awareness of the problems with air quality here in Serbia. But there is a long way to go to solve them.  Tackling climate change and protecting our environment are among the most important tasks we face. Cleaning up the air we breath will be a good start.

The UK doesn’t have all the answers of course.  But we have been working for longer on finding them.  The UK and like minded partners will be speaking up and working with Governments and civil society to help make sure that.

The UK and Serbia have concluded a new trade agreement.  Signed in the 'Brown Salon' of Belgrade's Palace of Serbia by the Serbian Trade...
Read more

The US national holiday, Independence Day, commemorating 4 July 1776, was marked with a traditional reception at the residence of the American ambassador. On...
Read more

Although trade cooperation between the U.S. and Serbia remains below the level of a billion dollars, the two countries are increasingly finding new opportunities...
Read more