Last month saw the closing of an exhibition of Miloš Šobajić at the Museum of Contemporary Art of Vojvodina in Novi Sad. Why are we highlighting this information? Because this was the eighteenth solo exhibition of this great artist. With his first exhibition coming when he was just 21, this total means that he has held an average of two solo exhibits annually throughout his career

This latest exhibition is part of celebrations marking the centenary of Vojvodina’s accession to Serbia. Under the title ’Fleeing and Choking’, Miloš Šobajić exhibited 16 large-format paintings, two video works and two monumental sculptural installations. A native Belgrader, following graduation from the Belgrade Faculty of Fine Arts in 1972, Šobajić relocated to Paris. He gained recognition on the artistic map of Europe and the world and went on to exhibit on almost all continents, while his works are included in the collections of many world museums. He returned to Belgrade in 2005, in order to establish Megatrend University’s Faculty of Arts and Design. He now spends his time living and working in both cities.

The title of the exhibition ’Fleeing and Choking’ awakens many associations. Why did you choose this title?

Somewhere towards the end of preparations for the exhibition, I realised that an adequate title would be ’Persecution’. The images I selected depict all persecutions of civilisation, from biblical oppression to the latest forced migrations of people from North Africa, via the Great Exodus of Patriarch Arsenija III Čarnojević, which is the most significant for us Serbs. I fused all of those persecutions in this exhibition to form a general fleeing.

Where are we fleeing to?

God expelled us from Heaven into a hellish land ruled by the Devil, and we’ve been fleeing since then, unable to settle in any way. And this eternal persecution has taught us always to be ready to pack and flee if we cannot defend ourselves.

The underlying theme of the Novi Sad exhibition was the Masaccio fresco ’Expulsion from the Garden of Eden’, created around 1430, in which an angel dressed in red robes can be seen above Adam and Eve, who are exiting the garden with heads bowed. This is the central reproduction in the video through which I present all possible exoduses of this world. Not all of the paintings exhibited were new works – among them were works painted twenty years ago, but all correspond to the context of the story of persecution. In fact, it is possible in all of my pictures to see a man avoiding traps on the road and trying to escape some trouble.

I remember that when I came to Paris, they told me how all of us who come from the Balkans paint pictures of such topics because there have often been a lot of wars here. I didn’t agree with that, because I didn’t feel any pain as a result of World War II, which ended as I was born. There’s no fear of war within me. I’m only feeling that for the first time now when the planet is becoming a place filled with danger. I’ve included the title ’Place of Great Danger’ in many of my pictures. I was born at the most beautiful juncture of the last century and spent my first fifteen years amazed by the amount of beauty on the planet. Those were the wonderful 1950s, ’60s and even ’70s, without an inkling that a cataclysm would occur. And then…

God expelled us from Heaven into a hellish land ruled by the Devil, and we’ve been fleeing since then, unable to settle in any way

You oppose the so-called New World Order, which you describe publicly as being the cause of the trouble on the planet. What are your arguments?

Publishing house ’Vukotić Media’ recently published your book ’Slikaj i ćuti’ [Paint and Shut Up], an autobiographical and controversial account of art. Firstly, how come you opted for this non-visual medium in your career and, secondly, should the title of the book be read with a commanding, irreverent tone?

I’m always writing and noting something, so the book emerged somehow spontaneously. The title too. Specifically, the system requires that a painter has nothing to say. That’s why exhibitions are organised in which everything is stated in advance, without originality; an exhibition that avoids feelings in order for everything to be banal glorifying of the system. The title is autobiographical: I was once sitting in a bistro in Paris with a delegation of the Communist Party of Yugoslavia, and at one point I asked the head of the delegation if it was true that President Tito was only 163 centimetres tall. 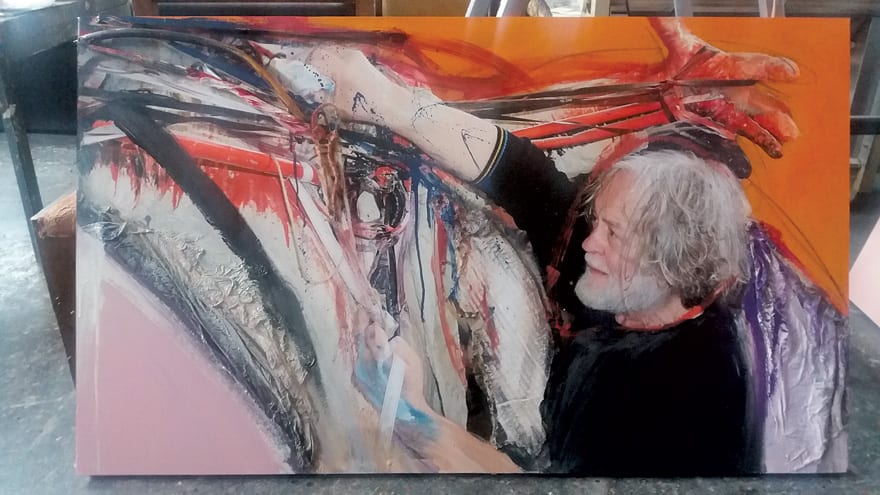 A hush came over the table, and then the delegation chief asked me, “Are you a painter?” You are! Well then, shut up and paint, and leave it to us comrades to think!” A painter is a subversive element, and painting, if it is worthy, is subversive. The artist became an individual in the 20th century, and that’s not in accordance with the will of the system. I think an artist should oppose all flags, be his own person and suffer the consequences. However, three thousand years of Pharaonic art refute what I just said: that art remains unsurpassed, despite being dictated by power.

A painter is a subversive element, and painting, if it is worthy, is subversive. The artist became an individual in the 20th century, and that’s not in accordance with the will of the system

Your book is also a critique of the current art scene. What irritates you about it?

The fact that visual art has been inserted into a fine art over the past 40 years. Visual art is fake; those are exhibitions of works made from piles of ripped little papers, car number plates, pre-painted walls etc. The system loves such works and immediately places them in museums. In that way, the system impacts the masses and human minds. That’s because when someone tells you that piles of ripped little papers represent art and you respond by saying that you do not understand it, then you are declared an ignorant fool. Just as you are dubbed a fool if you’re not amused by Anglo-Saxon humour. The slogan of the system is that we are all artists because that’s the only way to ensure that nobody stands out; that’s the only way for there to be no contradicting of their system of values. Everything must be in the apotheosis of the banal; for us to feel like we could have done it when we look at it. There is no glorification of art. An artist mustn’t think that he is special.

You often exhibit in large museums abroad, while your works form parts of famous collections. All these successes are a result of your talent, skill and work, yet your international exhibitions are considered as national successes by the public here. The same phenomenon applies to any successful athlete, scientist etc. How would you comment on this?

You know, when someone says that someone is a French painter or a German painter, that means that the state has allocated money to promote that artist to promote itself. In our case, this would mean that Serbia should allocate significant funds to lead five painters, five writers and five composers on all scenes around the world. How does a painter whose surname ends in ‘ić’ compare with Kiefer? He is a great painter of high quality because the state chose him and stood behind him, and he would only have been a great painter and nothing more if the state wasn’t behind him.

…that’s correct; it’s enough for him to have hung a picture in some entranceway in Paris. Many boasts of having exhibited in Paris. Paris welcomes everyone and has an audience for everyone. Paris attracted people with its light, and many burned on that light as though flying into a night lamp. I think that our Dado, who lived in Paris, is the greatest painter generally – not the greatest Serbian, Montenegrin or French painter, but the greatest in general. He’s fascinating. You know, while I was in Paris there were 65,000 registered painters. In a hundred years it will be known what is good among everything that is being exhibited today.

I think an artist should oppose all flags, be his own person and suffer the consequences

Rounding off the story with an anniversary, let’s turn to your 80th solo exhibition. Large format works are only for large walls?

Some people have large walls and my pictures adorning them! I often sold paintings in Paris to companies located in modern buildings with spacious white walls. The pictures exhibited in Novi Sad almost all belong to my legacy of works that I gifted to Belgrade. A place was recently identified where my legacy works will be housed, and I think that my legacy house will open by the end of September.