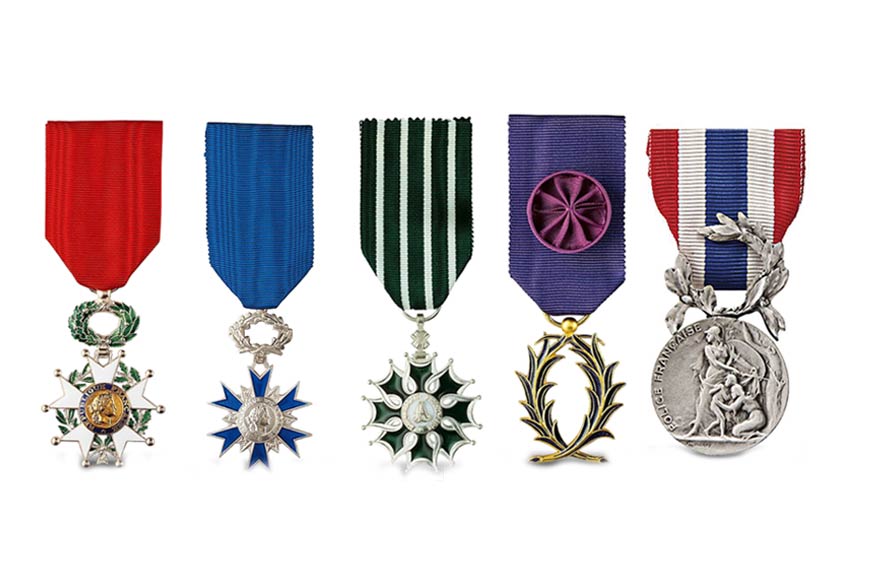 How Belgrade Has Been Decorated

This brief overview of French orders, decorations and medals testifies to both the virtues that are worthy of awarding and the historical circumstances under which these decorations were established, but also the values promoted by the French state. In addition to prominent individuals, in exceptional cases these decorations can also be awarded to cities.

Phaleristics is an auxiliary science of history and numismatics that studies award decorations, their origin, development, organisational and legal characteristics, aesthetics, artistic expression and the social circumstances in which such decorations were introduced. This is a brief overview of French orders, the moments in history when they were introduced and the ideas that prompted their introduction.

The National Order of the Legion of Honour (Ordre National de la Légion d’honneur) is the highest French decoration, which was established by Napoleon Bonaparte – 19th May, 1802, who was then First Consul of the First Republic, as a recognition of military or civilian merit regardless of the origin, religious affiliation or place of birth (homeland) of the recipient (at the time this was a revolutionary idea that was completely in line with the ideas of the French Revolution), under the condition that the candidate to be decorated is committed to the fundamental ideas of the French Revolution, which were freedom, equality and fraternity.

In line with Napoleonic ideas and ideals, membership in the National Order of the Legion of Honour is extremely egalitarian: recipients can be both women and men, civilians and military personnel, regardless of rank, status, birthplace or religious affiliation, so in principle people of any status can become members of the Order of the Legion of Honour. This Order is awarded in the ranks of knight, officer, commander, grand officer and grand cross. 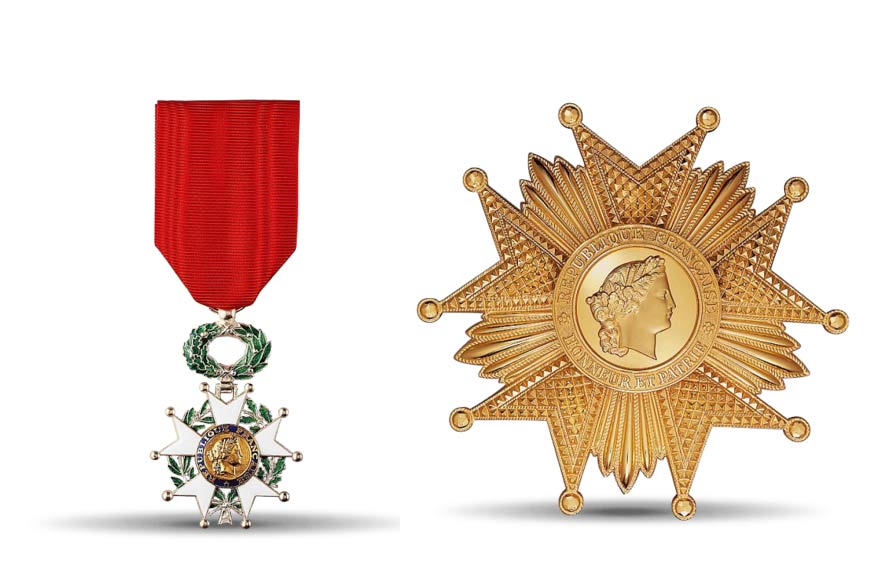 In order to be nominated for the Order of the Legion of Honour (as a rule, a person cannot submit their own candidacy, but the Order can be entered posthumously, which was introduced after World War I), a person must have amassed 20 years of exceptional merit during peacetime (this applies to civilians) or to show exceptional courage during wartime (this applies to military personnel). The Order of the Legion of Honour for War Merit automatically includes the awarding of the Cross of War (Croix de Guerre), France’s highest military decoration. The Order of the Legion of Honour has 92,000 members. A total of 2,800 people can be decorated annually, both for military and civilian merit, with the award able to be granted to a maximum of 320 foreigners who, unlike French nationals, cannot be members of the Order.

In exceptional cases, this order can also be awarded to a city, which was the case when French Marshal and Honorary Duke of the Serbian Army, Franchet d’Espèrey, presented this recognition to the City of Belgrade on 21st December 1920. Apart from Belgrade, only a few other cities outside France have received this decoration: Liege (Belgium), Luxembourg (Luxembourg), Volgograd (Russia), Algiers (Algeria), Brazzaville (Congo) and the latest in the group, London (United Kingdom), which received the award on 18th June this year. 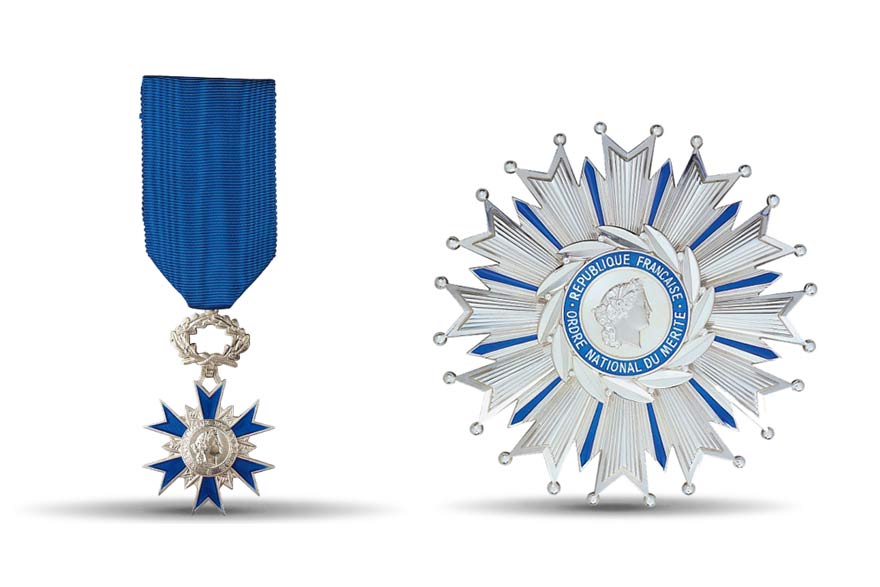 The National Order of Merit is a very important and prestigious French decoration that was established in 1963. French President Charles de Gaulle used it to replace a series of other decorations that had existed until then. It is awarded for special merit, on behalf of the President of the Republic of France, to both foreigners and French citizens, in the ranks of knight, officer, commander, grand officer and grand cross.

This decoration is mostly awarded to crown the realisation of a person’s career in the field of art and literature, with the recipient having already achieved their greatest results. However, it is sometimes awarded as a stimulus to youth, in order to encourage zeal, courage and an innovative spirit, which are necessary instigators of changes in our view of the world. 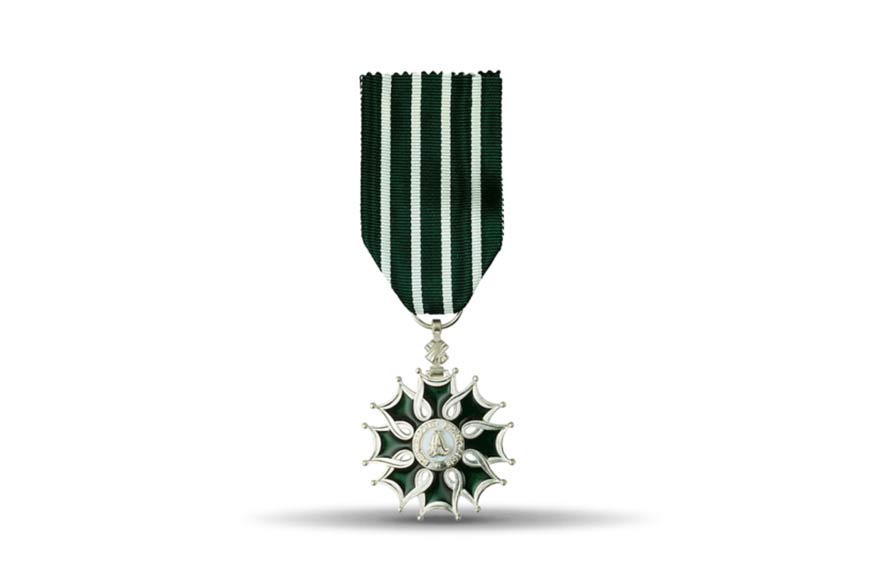 The order is awarded by the French Ministry of Culture to “persons who have distinguished themselves through creativity in the fields of art or literature and thus contributed to the artistic and cultural heritage of France and the world”.

Established in 1957, it “prompts respect and envy among artists, writers and creators”, according to André Malraux. It has three ranks, knight, officer and commander. This decoration is annually awarded to 450 new knights, 140 new officers and around 50 commanders worldwide, which is a relatively small number compared to many other decorations, making it even more prestigious.

The Order of Academic Palms is awarded on behalf of the French Ministry of Education to prominent individuals who have contributed, and continue to contribute, to spreading knowledge and education, including internationally, and in particular to strengthening ties that unite two countries. 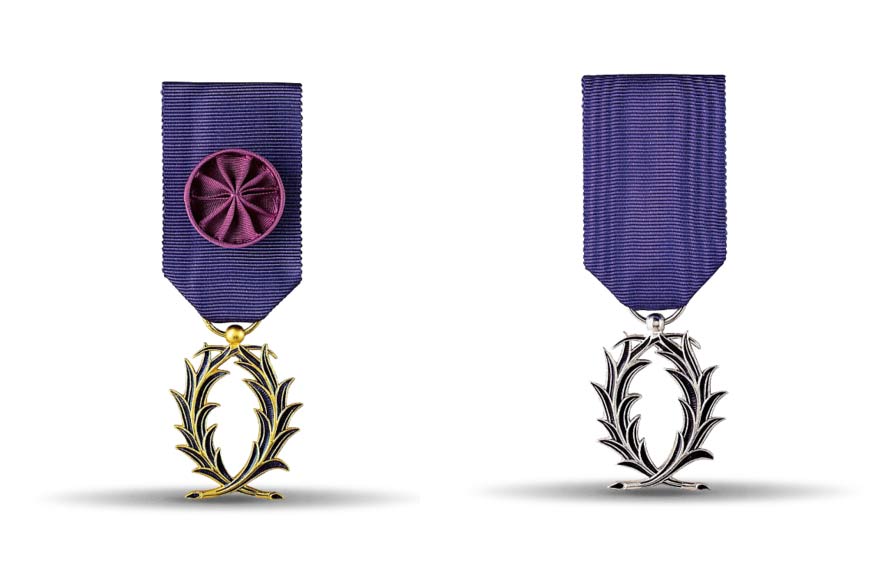 This decoration, established more than 200 years ago, is awarded to French nationals and foreigners for their scientific and professional commitment, and their contribution to strengthening France’s global reputation. The decoration was established by Napoleon Bonaparte as an acknowledgement of eminent members of the University of Paris. Foreign nationals have also been able to receive this recognition since 1866. The Order of Academic Palms has had three ranks since 1955: knight, officer and commander.

This decoration, established in 1903 at the request of Émile Combe, then French interior minister, is intended primarily for French civil servants who have achieved exceptional results in the performance of their duties, or for those who have amassed 20 years of impeccable interior civil service. 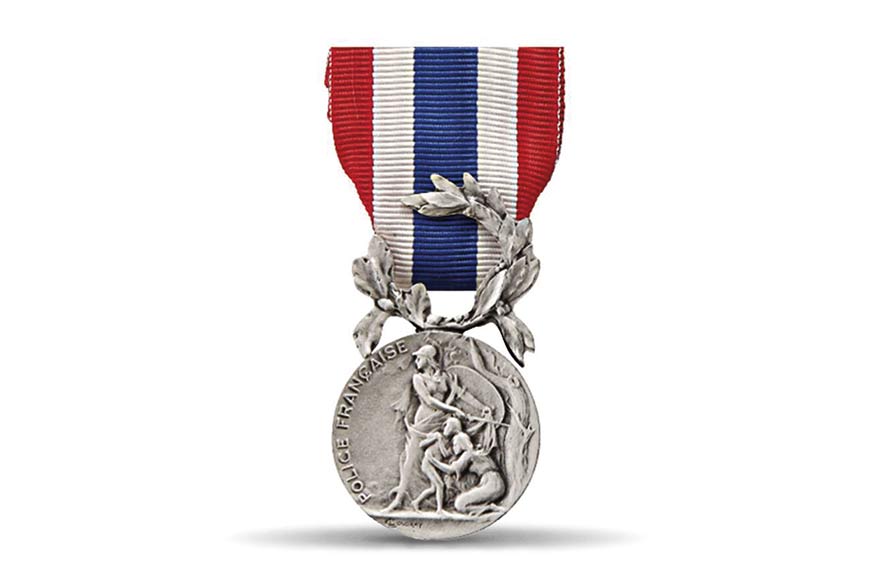 In exceptional cases it can also be awarded to foreigners who have contributed greatly to the work of the French national police. Since 2013 this medal has had two degrees – gold and silver.

Adaptation On The Go

Crises like the Coronavirus pandemic sometimes lead to the emergence of real heroes, and sometimes completely strip bare someone's mutual relations. Judging by what...
Read more

The EU is not in a position to demand that Serbia recognises Kosovo since the several Member States have not recognised the independence of...
Read more

Dragoljub Damljanović, President of the CCFS

We Must Help Each Other Exit The Crisis

Certification Is Key To New Markets

Bureau Veritas is a leading company specialised in international certification, verification and testing that was founded in 1828 in Paris and opened its office...
Read more

With good internal organisation, we've succeeded in being available to members at all times, and that will be the same in the future Even prior...
Read more

Total is one of the largest French companies and one of the four most successful oil companies in the world, with more than 100,000...
Read more

Waste as a Top Raw Material

Eko Bio Invest is a company that's starting to conquer the world's markets with products made from a material that represents an alternative to...
Read more