Luka Burilović, President of the Croatian Chamber of the Economy

Serbia and Croatia have the potential to work together better than has been the case to date, from joint investments to joint exports. On the global scale, our economies are both small, but through joint forces, we can count on larger markets, simpler business start-ups on third markets and better references

After a long recession, Croatia recorded steady economic growth in the last year, and the President of the Croatian Chamber of the Economy (CCE), Luka Brailović, hopes that the new government, which has recognised the potential of guidelines for strengthening the economy proposed by the CCE, while soon focus more attention on their operationalisation.

To what extent is your appeal for policymakers to listen to the voice of entrepreneurs and science today recognised by the Croatian government?

At this juncture, the political situation in Croatia is quite unstable, while the economy is often a collateral victim of the environment in which it finds itself. Unfortunately, decision-makers have often lacked the ability to hear our appeals, despite the fact that without economists there can be no state and no progress, nor a contented society, and ultimately no high-quality natural environment which we are all striving towards.

I believe that politics will transcend all disagreements and I hope that we will soon have stability, which is one of the main prerequisites for the unhindered development of the Croatian economy.

Last year, the CCE was one of the key stakeholders in the project “Let’s employ Croatia”. To what extent are the guidelines for reform that you then defined now part of the working programme of state institutions?

The CCE, in cooperation with dozens of Croatian labour market experts and representatives of all economic sectors, produced 39 concrete measures and reforms for accelerating and increasing employment in Croatia. Each measure is complex and includes a large number of stakeholders. This is not just about recipes or changes to laws and regulations, thus their actual application will require some time and a certain type of institutional preparation.

The new Government has recognised the potential of some of these guidelines and began their operationalisation. Such as the introduction of dual education based on the models of Germany and Austria, where the CCE has already established good cooperation with key ministries and other institutions, in order for us to be able to start as soon as possible at least with pilot projects, while our goal is to align educational programmes with the needs of the economy, thereby effectively reducing the high rate of youth unemployment, who – according to the principle of “learning by doing- working by learning” – would immediately walk into jobs. Serious consideration is being given, although a concrete legal form has not yet been received, regarding our proposals related to the extension of working life, which in Croatia is only 32 years.

How satisfactory, considering the burden of external debt, is expected Croatian economic growth of 1.8 to 2%?

In principle, Croatia cannot be satisfied with real growth in economic activity of less than three to four per cent annually, because only such growth rates would enable stable longterm growth and development. However, it is important that in the last year and a half of Croatia has been recovering from years of recession and that the trends are increasingly positive.

Do we use, as two close countries with many intertwined interests, sufficient resources that are available to us for joint marketing and the production of goods and services?

One can always cooperate better because the opportunities are numerous. Our economies are small in global terms, but certainly, in some projects with joint forces, we can count on tackling larger markets, simpler launches of doing business on third markets, better references etc.

I believe that politics will overcome all the warning signs and disagreements, which are currently the basic barriers to change, and that the Croatian economy will be given a chance to develop unhindered

How do you view the challenges of industry 4.0, which is slowly catching momentum primarily in economies towards which our economies are turned the most, such as Germany, and can our countries, with their modest production capacities, adjust to these new conditions?

Industry 4.0, based on the model of the Smart factory, is gaining increased momentum in the highly developed world. 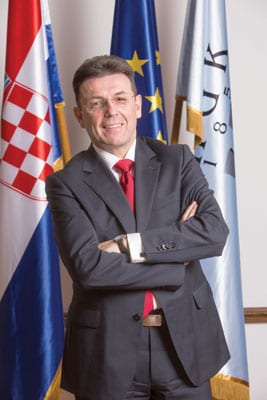 In order to increase the quality of products and services, flexibility and efficiency, and reduce operating costs, it is necessary to connect all systems based on internet technology between machines, people, products and business processes.

The industries and activities that are in the Industrial Strategy of the Republic of Croatia from 2014 to 2020 are recognised as the drivers that are ready for these challenges. I will give just three examples of highly sophisticated products that the World Bank has globally recognised as products with which Croatia can compete in the global supply chain of values – HS Product rifle, Končar’s transformer and Uljanik specialised ships.

For the active implementation of the concept of Industry 4.0, it is necessary to strongly connect the academic community and the economy. That’s why we decided to launch the Centre for Industrial Development as a link between the specified sectors that will encourage innovation and impact on the competitiveness of the Croatian economy.

Croatia has products with which it can be globally competitive in terms of strengthening Industry 4.0, but it needs a higher level of innovation and a better trained workforce, upon which the CCE insists

The CCE is one of the organisers of the regional agribusiness conference “Across the fields to Europe”, together with the Serbian and Croatian governments. Has it produced some concrete plans of cooperation for our economies and businesses?

At the conference, it was concluded that there is great potential in the trading of finished food and confectionery products, wine, sugar, ecological and protected products, while the possibility of joint participation in new markets and the transfer of knowledge and experience was highlighted in particular.

The CCE and Croatian companies are open for further cooperation and activities in the organisation of business meetings, workshops and training that will contribute to increasing trade and helping Serbian companies and the economy in preparing and successfully using EU funds.

Where do businesspeople from both sides face the biggest obstacles in cooperation and what can chambers of commerce do to remove them?

Besides daily cooperation between the CCE and the SCC, actively contribute to the work of the Chamber Investment Forum (CIF), which comprises six chambers of commerce from the region and the Chamber of Commerce of Slovenia.

The CIF’s first joint body of the chambers of commerce of the region, which – through the activities of specially formed working groups – will work on the preparation and implementation of projects defined by the so-called Action Plan of the CCE, which has proposed three projects that were accepted by the CIF, and those include the construction of the so-called Digital Platform of Western Balkan Chambers (WB), which will unify all information and chamber services related to the activities of CIF WB and the establishment of the joint Venture Capital Fund WB, with the aim of financing start-up companies and projects of SMEs.

You are a member of the Management Board of the association of European chambers. Where are the similarities and differences in the problems of businessmen in the region, in relation to your European colleagues?

Due to the fact that companies that want to survive must think and act globally, all companies today face similar problems: how to be more competitive, reduce production costs and maintain quality; how to find new and retain existing customers and to resist the increasingly stronger global competition.

Companies in the region certainly, along with these market problems, also have additional problems over which they do not have a direct impact, such as illiquidity, inefficient and bureaucratic administration and the uncertainty of operations (unstable tax system and framework for doing business).

Therefore, the main task for chambers in the region is to raise awareness among all stakeholders regarding the current problems in the economy, proposing solutions to regulators and implementing new services and projects aimed at raising the competitiveness of the economy by internationalising the operations of members.

Serbian President Aleksandar Vucic has embarked on a two-day visit to Croatia amid continued acrimony between the two neighbors.
Read more

Almost thirty members of the Croatian Business Club (CBC/HPK) attended the annual session of the HPK Assembly, held on January 25th at the Belgrade's...
Read more

The first cafe in Zagreb that employs deaf waiters opened this week in the Croatian capital Zagreb. Silent Cafe opened its doors this week on...
Read more

In order to mark the occasion of the upcoming Christmas and New Year holidays, the Ambassador of the Republic of Croatia to Serbia, H.E....
Read more

H.E. Gordan Bakota graduated from the University of Zagreb’s Faculty of Law in 1991. Following an internship at the State Attorney’s Office of the...
Read more

Shortage Of Labour Force In The Region

The unemployment rate in Serbia has been reduced in the last two years from 17.7% to 15.3% and according to the forecast a further decline is expected by the end of 2017
Read more

Specially brewed beer made of chicken and vegetables and ice cream made from bananas, peanuts, yoghurt and soy milk are top items on the menu in Croatia's only beach bar for dogs.
Read more
Cord MagazineLeaders Meeting Point