Have You Ever Heard Of HNA Group? Here’s Why You Will!

On a warm summer night in Paris, hundreds of executives, bankers, diplomats, and French officials walk the red carpet snaking up the steps of the Petit Palais museum – a sumptuous Beaux Arts building in the heart of the French capital, with sculptures and paintings set around a manicured garden.

Under 200-year-old frescoes, the guests dine on lobster, duck, and white-chocolate mousse, prepared by a top French chef, washed down with grand cru Bordeaux, and topped off with entertainment from the Peking Opera. Three large red letters affixed to the ornate gates offer a clue about who’s throwing the invitation-only affair: HNA.

To the hundreds of people passing by, the name HNA probably means nothing. But to the business world at large, the presence of those three letters is another sign—if any is needed—that a little-known Chinese conglomerate with provincial roots has, in just a few years, transformed into a powerful global player with tentacles stretching across the planet.

HNA Group, headquartered in Hainan in southern China, still lacks the brand-name status it eagerly seeks. That’s despite the fact that it has plowed tens of billions of dollars into buying up foreign assets since 2015, on every continent—including $5.66 billion in just the past six months, according to the tracking firm Dealogic. By the company’s estimation, its investments in the U.S. alone have reached $35 billion.

Over the past two years, about $1 trillion has flowed out of China, as Chinese individuals and companies, having made fortunes at home and with state-owned banks willing to lend, invested elsewhere. Among those companies, one of the most aggressive has been HNA. Its dealmaking in some ways highlights how a mere handful of Chinese groups have snapped up dozens of Western assets, especially since the 2008 economic crisis, while at the same time leaving unanswered questions over ownership and transparency.

In the case of HNA, its executives have crisscrossed the globe in a frenetic buying spree, making deals through a labyrinth of subsidiaries in China and abroad. The purchases have included household names for Americans and Europeans. Among them are Minnesota-based Carlson Hotels— owner of the Radisson and Park Plaza hotels—which HNA bought outright last December for an undisclosed sum. In March of this year, it bought 25% of Hilton Worldwide Holdings, the hotel group, from Blackstone for $6.5 billion. And in May it increased its stake in Deutsche Bank to become its biggest shareholder, with its stake worth about $3.7 billion. 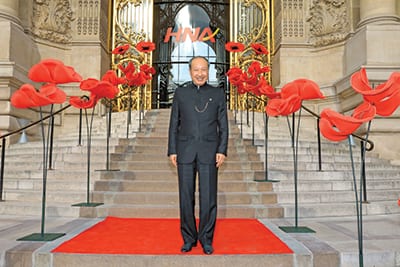 The list goes on: HNA owns the airline catering giant Gategroup and the aviation servicing giant Swissport. In April of this year, HNA’s Dublin-based aircraft leasing subsidiary, Avolon Holdings—which HNA bought in 2016—acquired the aircraft leasing arm of the New York financial firm CIT Group for $10 billion, turning HNA into the world’s third-largest lessor of planes. And its U.S. real estate holdings include 245 Park Avenue in Midtown Manhattan, which it bought in March this year for $2.2 billion.

In December, HNA went to California and bought Ingram Micro, the Irvine-based company that is the world’s biggest distributor of technology products, with operations in about 160 countries. The price: $6 billion—in cash.

There are plenty of other purchases that, by HNA’s outsize standard, seem almost forgettable: eight golf courses purchased in Washington State for $137.5 million last October, for instance. In January, HNA Capital, one of the group’s subsidiaries, spent about $200 million for a majority stake in the New York hedge fund SkyBridge Capital, according to HNA. That deal might have gone unnoticed had the seller not been Anthony Scaramucci, a key financial backer of President Donald Trump. In the blaze of coverage over Scaramucci’s windfall from China—after Trump’s acerbic anti-China talk—the President shelved plans to appoint Scaramucci to a White House post.

But HNA’s thirst for growth seems far from sated. That was clear when the company’s top executives met Fortune over several days in late June. It was a rare window into the privately held (and private) company. The execs described goals that seemed wildly ambitious, until one considers that HNA started from scratch just 24 years ago—making it younger than Apple, for example, by a full 17 years.

Chen says HNA’s driving philosophy is to be a Buddhist-style “practitioner of compassion, wisdom, and altruism

Indeed, the man who runs HNA today is set on its becoming one of the world’s biggest companies, period. “We have a target to be in the top 10,” says HNA’s CEO Adam Tan (his Chinese name is Tan Xiangdong), sitting in his hotel suite in Paris the morning after the company’s spectacular dinner, a charity event that takes place in a different city every year, on the birthday of the company’s billionaire founder and chairman, Chen Feng.

The Paris dinner kicked off HNA’s “International Week” in Paris, in which major clients, bankers (including from Goldman Sachs and J.P. Morgan), and business partners converged on the city over several days for meetings. At the National Golf course near Versailles, outside Paris, HNA launched the first HNA Open de France, a European PGA tour it now sponsors. All of that is valuable branding for a company grasping for the top. Tan, known universally in the company simply as Adam, says he doesn’t know how long it will take for HNA to become one of the world’s biggest companies. But he’s confident that it will get there. It helps, he admits, that business is booming at the moment. “Earning money is so easy,” he says, laughing. “We are now the geniuses.”

But the East is dominant in HNA’s 64-year-old co-founder and co-chairman, Chen Feng. He arose at 5.30 a.m. to meditate for 90 minutes. Chen, a devout Buddhist, says he packs his own meditation cushion when he travels so that not a day passes without an intense session. The practice has been crucial to his management of HNA, which he founded in 1993. “According to Buddhism, you become very calm and your wisdom will come out from you,” Chen says. Besides, he jokes, it keeps him young.

Among employees, Chen is revered as the company’s visionary, whose faith infuses its culture. “I bring a lot of stuff with me,” Chen says. “This hotel doesn’t know that kind of teapot.”

Thanks to HNA’s success, Chen is now a billionaire. The company would not answer questions about his exact worth or how big a stake he holds in the company. But his wealth made news in New York this year, over reports that he and his brother had each paid $47 million for apartments in Manhattan’s One57 tower.

Chen says HNA’s driving philosophy is to be a Buddhist-style “practitioner of compassion, wisdom, and altruism.” Chen, Tan, and four other HNA founders have pledged their shares upon death to HNA’s charity, the Hainan Province Cihang Foundation, which owns 22.75% of the group’s shares. HNA says the remaining 77.25% of shares are held by Hainan Airlines Holding and 18 individuals, whom it would not identify. The Foundation now owns 52.25% of HNA. It remains unclear whether the ownership structure has materially changed in recent days, or whether the closely-held company has just opted to reveal more accurate details of its top shareholders.

While CEO Tan says HNA just “happens” to have Chinese roots, it is those ties that may be key to determining HNA’s next moves.

Queen Elizabeth II‘s is famous for her passions, from horse riding to raising corgis; the monarch is also well known for her love of...
Read more

In the wake of the novel coronavirus pandemic, Paris has introduced the concept of a floating movie theatre. Keeping social distancing in mind, which...
Read more

The Australian software company Atlassian is putting its new headquarters in state-of-the-art mass timber and steel skyscraper. While the 40-story building will be the...
Read more