The 2020 Summer Olympics, officially known as the Games of the XXXII Olympiad, are planned to be held from 24th July to 9th August 2020 in Tokyo. It will be the second time that Tokyo has hosted the Olympics.

The official programme will feature 339 events in 33 sports; alongside five new sports that will include 3-on-3 basketball, freestyle BMX and Madison cycling, and new mixed events in several sports. The Tokyo metropolitan government has earmarked over $3 billion to cover the cost of hosting the Games.

With flawless preparation and execution, the Tokyo 2020 Games aim to deliver an event at which every athlete can realise their best performance and achieve their personal best. The world’s best technologies will be adopted in developing competition venues and in operating the Games.

All Japanese citizens, including Olympic and Paralympic volunteers, will employ their utmost resourcefulness as hosts to welcome visitors from around the world, with the best Japanese omotenashi, or hospitality.

Accepting and respecting differences in race, colour, gender, sexual orientation, language, religion, political or other opinions, national or social origin, property, birth, level of ability or other status allows peace to be maintained and society to continue to develop and flourish. 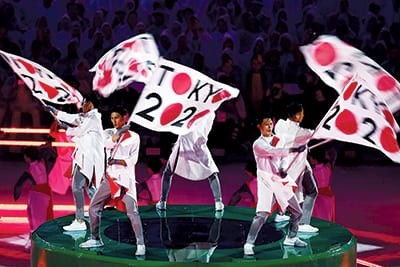 The Tokyo 2020 Games will foster a welcoming environment and raise awareness of unity in diversity among the world’s citizens.

The Tokyo 1964 Games completely transformed Japan, enhanced Japanese people’s awareness of the outside world and helped bring about the rapid growth of Japan’s economy.

The 2020 Games will enable Japan, now a mature economy, to promote future changes throughout the world, and leave a positive legacy for future generations.

Emerging tech in Japan is going to change how we experience the Olympics in 2020, and could even change the world.

Japan is also one of the most automated nations on the planet. Major robotics industries in the U.S., China, Korea, Germany, France, and other countries work with—and compete against—robot builders in Japan. So, naturally, we’ll see an army of robots swarming Japan during the event… enough to populate a small village, which is exactly what the Olympics committee wants to do.

The Asahi Shimbun newspaper reported that a government committee is launching a programme to install robots across the city, in “an initiative toward a ‘universal future society’, where robots and information technologies that assist humans regardless of age, nationality or disabilities are commonplace.”

All Japanese citizens, including Olympic and Paralympic volunteers, will employ their utmost resourcefulness as hosts to welcome visitors from around the world, with the best Japanese omotenashi, or hospitality

This “robot village” will be in Tokyo’s Odaiba neighbourhood, which will also be home to the athletes’ Olympic Village. (It’s already home to a 19-metre-tall Gundam statue.)

But they will be far from the only robots in the capital for the Games. 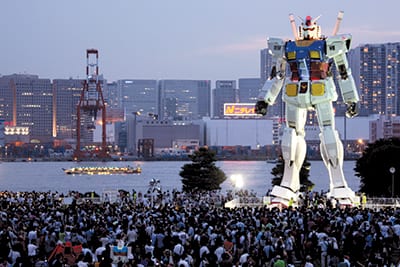 Here’s the idea: Many of the 920,000 foreigners expected to visit Tokyo per day during the Olympics can call for nearby robots to help with language translation, directions, or beckon for transportation—transportation that itself could be robotic, self-driving cars. From area hotels to shops to Tokyo’s Haneda International Airport, helpful, personal, polite robots will coexist alongside millions of humans, serving to carry their luggage, check them into their accommodation, or drive them to sightsee at Tokyo Skytree.

The English skill level in Japan, compared to other advanced nations, is low. And while the number of foreigners learning to speak Japanese has skyrocketed in the last decade, there’re still significant language and cultural barriers that tourists encounter. That’s why Japan is rolling out cutting-edge instant translation technology for 2020.

The country’s government-funded National Institute of Information and Communications Technology offers VoiceTra, a real-time translation app that accommodates 27 languages for text translation, including Urdu and Bhutan’s Dzongkha. Voice translation is a bit harder; the agency says the app understands 90% of spoken content. It so far covers English, Japanese, Korean and Chinese, and is expected to accommodate over 10 languages by 2020. The software will be available on computers and phones and at tourist-dense spots like landmarks and shopping centres and, for safety, hospitals.

Meanwhile, in the private sector, Panasonic is making a palm-sized gadget worn around the neck that will translate Japanese into 10 languages for the thousands of visitors set to descend on the metropolis. This electronics giant also plans to provide visitors with a smartphone app that scans Japanese signs and translates them on the spot. These are services that could be useful in countries around the globe. 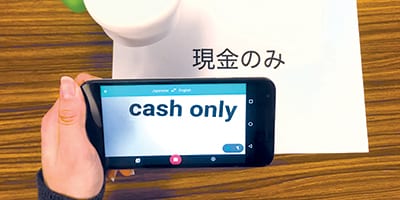 Japanese gaming giant DeNA is planning to get driverless taxis on Tokyo’s roads by the 2020 Olympic Games. That’s a significant achievement when some of the biggest names in tech—Google, Apple, Uber —plus car manufacturers like BMW, Toyota and Mercedes are all scrambling to be the first to get fully functioning autonomous vehicles on the road.

But Tokyo is the biggest, densest city on planet Earth: 13 million humans, 11.913 people per square kilometre. Plus during the Olympics, it’s estimated that a whopping 920,000 foreigners will roam this megalopolis on any given day. If Japan gets driverless taxis on Tokyo’s streets in time for the Olympics, it’s going to be an insane test run. 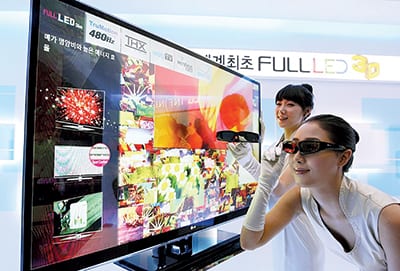 Japanese state television broadcaster NHK plans to air the Olympic Games in tantalisingly detailed 8K high definition. Just like the colour TV boom of the 1960s, Japanese companies are hoping to make the new, ultra-vivid image quality the de facto viewing on screens in Japan and beyond.

The made-in-Japan resolution, Japan Times reports, offers next-generation screen resolution: 7,680 by 4,320 pixels, or 16 times as many pixels as current HD. NHK has been at the absolute global forefront of 8K development, having started researching it way back in 1995. If anyone is bringing 8K to the world, it’s Japan, and it’ll be going gangbusters at the Olympics.

By 2020, NHK wants those TVs in consumer homes. Maybe demand will go up once viewers get HD viewing of their favourite sports, like baseball, surfing, or wushu, all contenders for new sports to be added to the Olympic schedule in 2020.

The Tokyo 1964 Games completely transformed Japan, enhanced Japanese people’s awareness of the outside world and helped bring about the rapid growth of Japan’s economy

ALGAE AS A FUEL SOURCE

Algae has remarkable potential as an alternative energy source. It sucks in carbon dioxide and converts it into energy. It’s preferable to other green energies that are grown on land, like oil made from corn, because it can produce 60 times more oil per acre and is relatively easy to grow. The problem is that Algae’s super expensive—making a litre of the stuff costs about $2.50, and that cost needs to be closer to 80 cents to be a viable alternative.

But Boeing wants to help Japan fly Olympic tourists to the island nation on jets fuelled by algae. As part of a consortium of over 40 organisations, including the University of Tokyo, the Japanese government, Japan Airlines, and All Nippon Airways, Boeing aims to offer algae flights on these major Japanese airlines for the millions of tourists expected to visit Japan in 2020, which is good, since algae can cut carbon dioxide emissions by up to 70 per cent, compared to petroleum fuels.

If Boeing and the others can prove that algae can be cost-efficient, practical and useful on a scale as large as the Olympics, we could start seeing a lot more international flights running on a green.

According to the Wall Street Journal, the Tokyo government plans to spend 40 billion yen ($330 million) to improve hydrogen energy use leading up to the Olympics, making Japan a “Hydrogen Society.” When hydrogen gas mixes with oxygen in a fuel cell, it’s able to produce exhaust-free energy, just like water can.

The plan is to make the entire Olympic Village hydrogen-powered, complete with at least 100 fuel cell-powered buses, press lounges and athlete dorms. The government also wants 6,000 of cell-powered cars in the road, with 100,000 on streets by 2025. There’s even going to be a giant pipeline constructed underground that’ll directly funnel the hydrogen into the Olympic Village. It’s part of a bigger plan for Japan as a whole to gin up nonnuclear energy sources after the Fukushima disaster.

The plan is to make the entire Olympic Village hydrogen-powered, complete with at least 100 fuel cell-powered buses, press lounges and athlete dorms

A Japanese astronomy start-up called ALE, CNET, Rocket- News24 and the Japan Times report, wants to shower streams of humanmade meteors across the sky, which could make for the most badass opening ceremony ever.

The idea is pretty out there—literally. The team is working with Japanese universities to design a cube-shaped microsatellite that’ll be launched into space and, in the world’s first project of its kind, shoot out tiny, inch-wide spheres made out of secret material. Friction in the air will cause them to glow while racing at five miles per second. Space.com reports that there’s no worry for space junk, since the fake stars burn up upon re-entry, like real space projectiles. 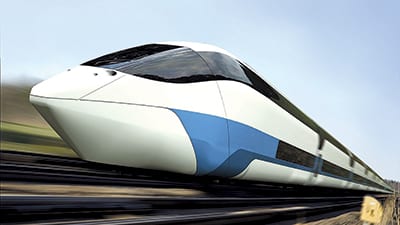 Japan brought humankind high-speed rail with its Shinkansen bullet trains 50 years ago, and now it’s eyeing next-gen rail travel: magnetic levitation. While some countries are arguably more advanced in this area—China’s operated a maglev in Shanghai for 11 years—Japan wants to bring the maglev to Tokyo by 2020. JR Central, the rail company that oversees Japan’s maglev train, hopes to have the train running to Tokyo in time for the 2020 Games, and then to Osaka by 2045. Earlier this year, Japan broke a land speed record for rail with its maglev train, at 601kph. The country’s looking to develop its maglev system further and expand to countries like the U.S., going so far as to bankroll half the cost for linking Boston to DC by maglev.

Considering Tokyo’s status as a tech hub, we could see some of the best engineering and tech to come out of an Olympics yet. If robots can provide excellent customer service during the Tokyo Olympics—a dense urban maze packed with millions of people in humankind’s biggest party—then they have a chance everywhere.