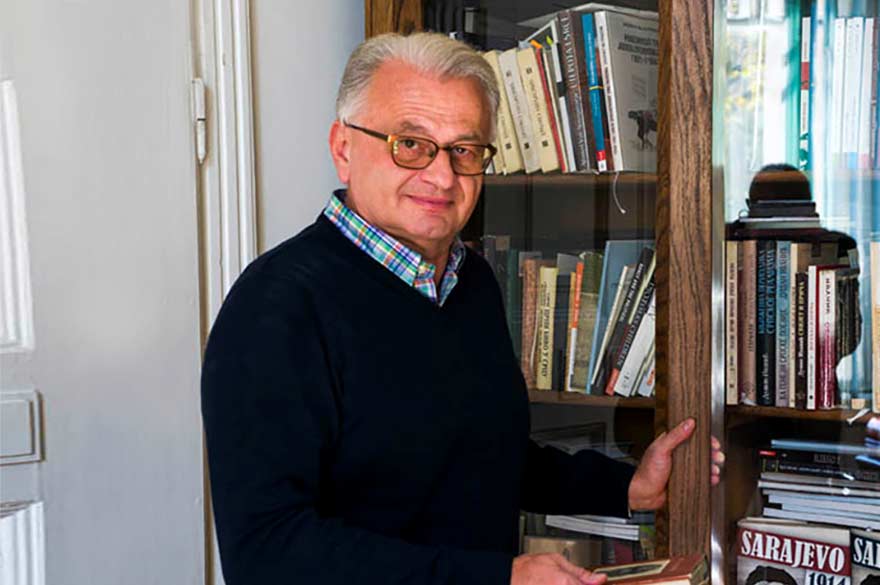 We Would Have Something To Show To The World

You never know where life will take you – I was good at mathematics, played chess, considered studying astrophysics and dealt with electrical engineering, and after a decisive encounter at the 10th Belgrade Gymnasium, I went off to study Serbian, Yugoslav and World Literature, earned my PhD degree and became a full professor of the 20th Century Serbian Literature

While studying, I was the editor of the then still renowned weekly “Student” and the magazine “Vidici”, and later, already being a professor, became the editor-in-chief of Prosveta, Plato and Mono and Manjana, edited and published hundreds of top titles and collected works. I enjoyed it all, and wondered what I needed it all for, and yet I launched the publishing activities of the University Library, which I’ve been managing for some time, and the last autumn, together with the Official Gazette, received the Award for Publishing Venture of the Year at the Book Fair – for selected works of great Serbian scientists who were also writers, from Atanasije Stojković and Stojan Novaković, Laza Lazarević and Vladan Đorđević, Mihajlo Petrović Alas, Mihajlo Pupin and Milutin Milanković, to Radovan Samardžić and Goran Milašinović. What a perfect array of great people, exceptional scientists and wonderful writers.

Serbian culture is under attack in the surrounding, emerging and ill-fated states, if indeed they are states and not political provisional arrangements. The Serbian language and Cyrillic script are savagely suppressed, with apartheid rule in parts of the former Yugoslavia, where Serbs are ‘Black’. This relates in particular to the authorities in Montenegro. We live in an age of kleptocracy and political savagery, but we need to be fully aware: not just in the surrounding countries. Despite this, Serbian literature still somehow resists the impact of ideology and brutality and survives despite its small and divided market, and this is a kind of a miracle. But apart from the top works, one has to take care of the whole system of education, which is not in a good state, care must be taken of the cultural habits of the citizens, who are exposed to media vulgarity and ideological primitivism, which are represented by ‘reality shows’. That kind of ‘reality’ is all around. Public communication and conducting brutal politics is often reduced to the level of threats, cursing and abhorrence.

However, excellent poetry is written, sometimes also prose, and dozens of young colleagues study literature and write criticism, translations of great slow-sellers still emerge. We would have something to show the world: symbolic capital, great works of art and cultural resilience. Serbian frescoes in famous monasteries don’t lack anything on Giotto, and the most liberal constitution of the 19th century was written in Serbia, which at the time had liberated itself from the Turks and erected, as famous German historian Leopold von Ranke put it, a torch of freedom across the whole of southern Europe. We suffered terribly in the two world wars, fighting with the allies against fascism, while, like the Jews, they also killed us in concentration camps, one of the largest in the world being Jasenovac, built in the then Independent State of Croatia just for the Serbs. In such a century, we also gave Europe two of the world’s greatest writers: Andrić and Crnjanski.

We are specific in that there were so many writers in the Serbian ruling families, which was not the case anywhere in the world: from Saint Sava, who was the founder of Serbian culture and the first Serbian archbishop, and his brother, the first crowned Serbian ruler, Stefan the First-Crowned, to Njegoš and Prince Nikola, who both ruled Montenegro; from Mihajlo Obrenović to Đorđe Karađorđević, coming from the two ruling families which were exchanging places at the throne by the mid-20th century. We are better than they think of us in Europe and America when they think of us at all, and we are much harder on ourselves than should be the case for any nation with such a history and tradition.

The Level of Bilateral Cooperation Must Be Raised

I want to believe that the misunderstanding over respirators is the last between our countries during this difficult time. I would like to emphasise...
Read more

Although it already appeared certain that the ruling party would secure a convincing victory in the upcoming parliamentary and local elections even before the...
Read more

Today, we face the global outbreak of a disease that has the potential to catalyze what the historian Eva Schlotheuber terms a “pandemic of...
Read more

We Are Available To Clients 24/7

Ingram Micro, as a leading distributor of IT equipment and software, in collaboration with vendors, was among the first to join the Serbian Government’s...
Read more

Barbara Pravi, a French artist and singer-songwriter of Serbian origin, presented herself to the Belgrade public at the city’s Botanical Garden on 28th June....
Read more

150th Anniversary Of The Birth Of Josip Plečnik

Little was known about Plečnik in Serbia until the 1920s. The credit for his arrival on the Belgrade cultural and arts scene belongs to...
Read more