According to the World Economic Forum’s Global Competitiveness Index for 2017, Serbia ranks 78th out of 137 countries, marking an advancement of 12 places on the Index, which is also a significant indicator of a country’s global position.

Serbian Finance Minister Dušan Vujović said that there are no elements of recession in the Serbian economy, before noting that Serbia’s economic growth next year will total between 3.5 and 4 per cent of GDP.

Commenting on Serbia’s 12-place advancement, Vujović pointed out that the country has made progress in many areas.

“We don’t have inflation as a problem and the macroeconomic indicators will be even better. This year we planned incremental growth of three per cent, but then reduced that 2.3% following talks with the IMF, because of the poor situation in the agriculture and energy sectors due to drought. We are remaining with a forecast of 2.3% for this year, but that will be compensated for in 2018,” said Vujović. He noted that we will have growth of between 3.5 and 4 per cent in 2018, and in the coming years we could have a growth of five to six per cent.

He stated that the Global Competitiveness Index is slightly behind when it comes, for example, to macroeconomic indicators. He noted that the results from the end of last year show the participation of public debt in GDP amounting to 74.1%, while it is now below 64 per cent. “In the next evaluation we will be positioned significantly better and I expect us to advance by twenty places.”

When it comes to the country’s credit rating, the minister said that Moody’s increased Serbia’s rating about seven months ago, while other agencies retained the same rating for Serbia as in the previous three years. He explained that our credit margin is now 1.3 per cent, which is four times better than in 2014 when it was at five per cent, and that Serbia is exceeding the performance perception of credit agencies. Accordingly, Vujović expects that the agencies will soon improve Serbia’s credit rating.

The minister also noted that Serbia achieved 80.4 billion dinars of surplus in the first eight months of this year, which is about a billion euros better than the plan that was agreed with the IMF. “This is because we were very conservative when making projections,” the minister added. He recalled that the earlier deficit has been reduced from 1.7 to 1.1%, and added that all this was achieved by measures on the side of revenue and expenditure. Thus, savings of between 17 or 18 billion dinars were achieved on the expenditure side, emphasised Vujović. 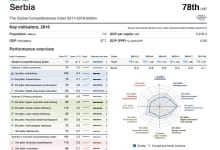 The war in Ukraine has disrupted supplies of grain and fertilizer, producing the worst food shortages since the global financial crisis of 2007 and...
Read more

Yulia Ustyugova, IMF Resident Representative For The Republic Of Serbia

Making Difficult Choices Must Be A Key Government Task

Limited policy space and more difficult access to financing means that policymakers will have to be very selective and targeted in their spending and...
Read more

The IMF Is Still Behind The Times On Capital Controls

Although the International Monetary Fund’s newly revised policy framework on capital controls makes some improvements on what came before, it is still likely to...
Read more

A delegation from the Republic of Serbia led by Governor of the National Bank Jorgovanka Tabaković will participate in the spring session of the...
Read more