H.E. Sem Fabrizi, Ambassador and Head of the Delegation of the European Union to the Republic of Serbia

The EU’s door is fully open to further accession, which remains merit-based. It is therefore very important that Serbia continues the reform process, making that its number one national priority: politically and economically, but also in society

Building a competitive and resilient market economy is a comprehensive process that goes beyond purely economic reforms. It was with this in mind that we spoke with H.E. Sem Fabrizi, Ambassador and Head of the Delegation of the European Union to the Republic of Serbia, about the broader context of reforms in Serbia.

How much has Serbia advanced in preparations for joining the EU when it comes to economic development?

– We believe Serbia has advanced rather well, as we set out in our Annual Report for 2017. Serbia is moderately prepared in developing a functioning market economy and has addressed some policy weaknesses, in particular with regard to the budget deficit. Inflation has been contained, and monetary policy has supported growth. Economic growth in the first semester of 2018 was good. Despite this positive macroeconomic outlook, there are still problems, including, for example, the high level of government debt. The budgetary framework and its governance need to be strengthened. Major structural reform remains incomplete when it comes to the public administration, the tax authority and state-owned enterprises. Informal employment, unemployment and economic inactivity are still high. The Stronger rule of law and the enforcement of fair competition will help private sector growth.

The EC reports noted that Serbia is moderately prepared to cope with competitive pressure and market forces within the EU, and has made some progress on increasing competitiveness. However, the level of investment activity is still below the economy’s needs.

Do you consider the EU accession incentive received by Balkan countries in Sofia still valid, or is it relativised by the EU’s need first to address its organisation, as stated unambiguously by the French President?

– The Western Balkans Strategy (February) and the Sofia summit (May) expressed unequivocal support for the European perspective of the region, as a political, social and economic geostrategic investment in a stable, strong and united Europe. This strong message remains entirely valid.

A number of actions need to be taken to strengthen an independent and efficient judiciary system, enable freedom of expression, and achieve tangible results in the fight against corruption

In parallel, the EU is also continuing its reform process. This was also mentioned in the Western Balkans strategy. The European Commission anticipated a number of proposals being launched before the end of the year.

How do you assess the effects of the Berlin Process when it comes to infrastructure connectivity within the region and implementation of the Digital Agenda? 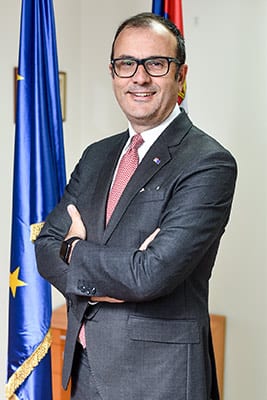 The EU allocated a billion euros in grants for the 2014-2020 period, through the Western Balkan Investment Framework, to finance infrastructure connectivity projects under the WB6 initiative. This amount is on top of the national IPA envelopes of the countries, which include 200 million euros per year for Serbia alone. Those funds also leverage the loans of International Financial Institutions (IFI). We have so far supported 31 projects with grants worth 698.2 million euros, with a total investment value of 2.4 billion Euros. The last project agreed for Serbia in 2018 is the first section of the Niš–Merdare–Pristina motorway. This project is worth 212 million euros.

The crucial role of digital connectivity has also been recognised. Fast and secure digital connectivity is an essential element for creating a market- and investment-friendly environment. At the Digital Summit in Sofia in June 2018, all the Western Balkans partners pledged their commitment.

The visit of EC Commissioner Gabriel to Belgrade at the end of September – first to the Western Balkans – immediately followed through to pursue discussion on lowering roaming charges within the region and in the EU, supporting digital infrastructure and broadband connectivity, cybersecurity, the digitisation of industries and eGovernment, eProcurement, eHealth and eSkills.

How is it that, despite these incentives promoting the integration process, Serbia has yet to open some of the economic chapters that it has long been ready to open?

– Following the latest Inter-Governmental Conference in June, Serbia has now opened 14 chapters, and provisionally closed two of them. Negotiations are ongoing to open further chapters, including some pertaining to the economic area.

More broadly, it is also important to remember that the accession process is not just a technical exercise; it is also a political one. The negotiation framework indicates that overall progress in the negotiations depends on the progress made in the area of the Rule of Law (chapters 23 and 24) and the full normalisation of relations with Pristina (Chapter 35).

Which reforms are lacking for Serbia to create the necessary preconditions for accelerated economic growth and the inflow of foreign investment?

– For guidance on further reforms, we can take the last Economic Reform Programme (ERP) jointly agreed by Serbia together with its EU partners last May. The key recommendations focused in particular on increasing capital spending; finalising the privatisation of the remaining state-owned enterprises, including banks; increasing investments in energy infrastructure and energy efficiency; ensuring that all instruments of support to companies are aligned with state aid rules; and reducing non-labour costs of the lowest paid jobs.

Our cooperation with the investor community, and the Foreign Investors Council in particular, is very good and relevant

Reforms are also needed in other areas; particular structural reforms in public administration, tax administration and state-owned enterprise. These are all necessary to ensure against endangering the excellent results achieved on fiscal stability. More efforts are needed to enforce fair competition (in particular state aid) and reduce the size of the grey economy.

Rule of Law remains a crucial precondition for progress in all areas, including for maintaining an attractive business and investment environment. The EC report indicates a number of actions to be taken to strengthen an independent and efficient judiciary system, enable freedom of expression, and achieve tangible results in the fight against corruption and organised crime.

The EU will continue to play a constructive role and support Serbia in this reform process.

To what extent has the presence of European investors in Serbia contributed to the Serbian economy’s transition to a modern market economy?

EU companies are by far the biggest investors in Serbia, accounting for more than 72% of overall Foreign Direct Investments here (€11.3 billion of a total €15.6 billion since 2010). This share was confirmed in 2017.

A coherent regional approach to attracting investments will be much more beneficial to all than a ‘race to the bottom’.This was the rationale behind the launch of the Investment pillar

The presence of EU investors and the progressive convergence of Serbia with the EU also represents a guarantee – a pull factor – for investors from other parts of the world. Of course, respect for EU rules remains important, particularly in the areas of state aid, fiscal incentives and labour rights.

How important is the feedback received from the investor community when it comes to EC evaluations? In this regard, how do you rate your cooperation with the Foreign Investors Council?

– Our collaboration with the investor community and the Foreign Investors Council, in particular, is very good and relevant. For the EU Delegation, businesses are our eyes and ears on the ground. They have first-hand information on how the business environment functions in practice, what the positive aspects and problems are, and how EU-related legislation is applied in practice. This is important information for us. 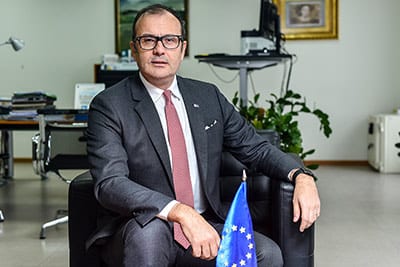 If I just give you one example, this year we successfully solved a de facto ban on waste exports that impacted negatively on a number of recycling companies, both domestic and from the EU. The ban was a breach of the Stabilisation and Association Agreement. Businesses alerted us to the problem, and we worked with the Serbian authorities to end the measure and bring the situation back to normality. This is just one example. We have established regular contact and consultations, including on our Country Report.

Which of the European-funded projects that are underway would you single out as being the most important in terms of fundamentally linking the EU and Serbian economies?

– With 200 million euros per year in grants, the EU helps deliver an impressive span of work to support Serbia in its accession process, on the economic side, but also on the political and social sides. At present we have over 600 projects in different areas. It is hard to single out any particular one – that would require a dedicated interview.

Among the projects focused on the economy, IPARD (which is expected to leverage 400 million euros) is undoubtedly an important tool to make Serbian agriculture more modern and export-orientated. Serbia exports around 70 per cent of its agricultural product to the EU. We would like this trend to remain steady, if not increase. Still, in the agricultural sector, the EU is funding – through the Horizon 2020 programme – the BioSense Institute in Novi Sad. This is a regional centre of excellence, which includes the first digital farm in Serbia.

The EU is also supporting innovation and start-ups in Serbia. Our Innovation Fund is supporting companies, especially SMEs, which are hitting the market with a strong return on investment.

In our comprehensive programme, our assistance also looks at areas with an economic and social gap when compared to those where added value is concentrated. This year we launched the 25-million-euro EU PRO programme, aimed exclusively at municipalities and cities in central Serbia, that will support the development of local economies and the preparation and execution of infrastructure projects to increase social and economic standards.