The banking system in Montenegro is characterised by stability, which is reflected in high capitalisation, liquidity and profitable operations. Improving the macroeconomic environment, positive results in the implementation of fiscal consolidation and preserved financial stability will serve to stimulate the operations of the banking sector in the current year

The key balance sheet positions of banks record growth both in the comparative one-year period and in the period since the introduction of an interim administration to two banks (IBM and Atlas Bank), i.e. since December 2018. As such, over the period of one year, total assets increased by 9.61%, total loans by 12.75%, total deposits by 8.04% and total capital by 11.6%. Likewise, the percentage of non-performing loans continued to fall during this same period, such that the share of NPLs in total loans at the end of March this year amounted to 4.87%. The share of loans overdue by more than 90 days amounted to 3.01% of total loans, which represents a level comparable to the pre-crisis period.

How prepared is the Montenegrin banking sector to handle possible external risks?

– The banking sector is highly capitalised and liquid. The solvency ratio at the level of the system stands at 17.29% and is significantly above the legal minimum. I would remind readers that the capital of banks plays the role of a reserve for unexpected operational losses.

When it comes to the reserves that banks issue in accordance with international financial reporting standards (IFRS), and which represent reserves for expected credit losses, the situation is also favourable. Specifically, at the end of March this year, these reserves represented 83.68% of the total level of NPLs, which indicates the high level of issued reserves for expected credit losses. In addition to this, liquid assets accounted for 21.03% of total assets at the end of the first quarter of 2019.

What kind of effect will the further implementation of fiscal consolidation and the expected slowdown in economic growth have on the overall volume of banking sector operations in 2019? 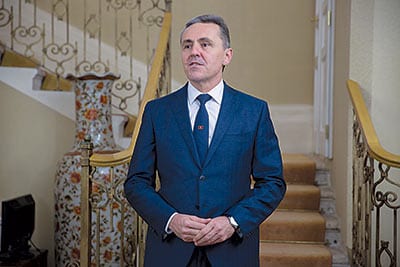 – Two factors will have a dominant influence on the growth rate of our economy in 2019 – the continuation of the strong investment cycle and continued implementation of intensive fiscal consolidation measures. As such, the focus of economic policy must be directed towards balanced development and the implementation of structural reforms, which – considering certain assumptions and in line with the latest CBCG projections – resulted in GDP growth of around three per cent in 2019.

I would accept with great reservations the assessment that this relates to an “expected slowdown” in economic growth, in the case that the comparison is based exclusively on the high growth rates of GDP of 4.9% achieved in 2018 and 4.7% in 2017. A growth rate of around three per cent is relatively high, especially when one considers that it comes from an increased base of the previous six years of continuous GDP growth.

Happenings at IBM and Atlas Bank didn’t impact negatively on trust in the banking system. This claim is confirmed by the fact that the average level of deposits recorded a constant increase in the period from December 2018 to March 2019

What kind of recommendations has the CBCG given the government regarding the further advancement of macroeconomic stability?

– The CBCG identified key sectors and proposed measures which when realised would activate economic potentials, enhance competitiveness and the business environment, and ultimately stimulate macroeconomic stability.

Improving competitiveness is of key importance to the dynamism of economic growth, and an important direction of action is combatting the grey economy, and doing so via three segments: implementing enhanced inspection oversight, particularly in the fields of construction, tourism and other service activities; detailed analysis of tax policy in terms of the level of the rate of contributions for mandatory social insurance, in the direction of reducing it and increasing minimum earnings, which will have the cumulative effect of reducing the grey economy and the burden of employees’ gross earnings, but also on raising the living standards of employees with the lowest incomes. We are thus pleased that the Government has authorised its members in the Social Council to propose a 15 per cent increase in minimum monthly earnings (from 193 to 222 euros).

Moreover, the CBCG has also suggested increasing administrative efficiency at all levels of the state administration, the continuation of the digitalisation of public administration and the one-stop shop principle for services that are provided by institutions at the state and local levels.

Recommendations have also been given with regard to structural reforms, which relate to improving the efficiency of the institutional environment, labour market flexibility, the sustainability of the pension system and social benefits, as well as the effectiveness of healthcare and education systems.

How prepared was the Central Bank for the emergence of individual vulnerabilities in the banking system?

– The CBCG permanently monitors the operations of banks, through the performing of direct controls, but also indirectly, on the basis of reports that banks are obliged to submit.

The term ‘vulnerable banks’ refers to banks that have received an opinion from external auditors with reservations regarding their financial statements. Three such banks were subject to special monitoring on the part of the CBCG. Bankruptcy proceedings were launched at two of these banks, while the third bank managed to advance and had a solvency ratio above 12%.

This bank succeeded in reducing the fundamentals that led to external auditors giving an opinion with reservations regarding its financial statements. Under the scope of the regular monitoring of the operations of the aforementioned bank, direct control of its operations has been carried out and the report of this control is expected to be finalised s oon.

The end of last year and the beginning of this were marked by work on new laws related to the work of credit institutions. What do they bring that’s new compared to existing regulations?

This will enable the applying of the new Basel Standards of Capital and Liquidity (Basel III), which are aimed towards strengthening capital requirements for banks, as well as the creation of a framework for new regulatory requirements related to liquidity.

The CBCG identified key sectors and proposed measures which when realised would activate economic potentials, enhance competitiveness and the business environment, and ultimately stimulate macroeconomic stability

The Law on Amendments to the Law on the Bankruptcy and Liquidation of Banks will harmonise the wording of this Law with the requirements of the EU Directive on the Recovery and Rehabilitation of Credit Institutions, specifically in terms of the order of priorities, according to which private individuals, micro, small and medium-sized enterprises should have more favourable treatment in the order of priorities than other creditors, which represents additional protection for the creditors of a bank under bankruptcy.

How developed is e-banking and e-services in the sphere of the banking sector?

– A growing trend in all electronic banking services is present in the Montenegrin banking system. The number of internet payments by users at year’s end 2018 totalled 66,534, while the total number of mobile payment users stood at 43,626.

How close is Montenegro to reaching an agreement with Pay Pal on this company’s entry into the Montenegrin market? 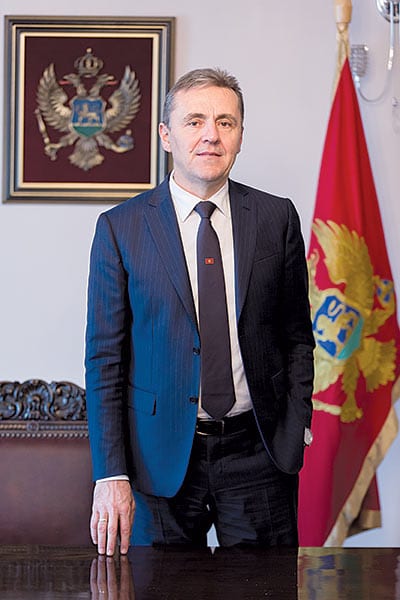 – Montenegro enabled the function of “sending money” as far back as 2014, which means that our country fulfilled the conditions prescribed by Pay Pal, in that all preconditions enabling the citizens of Montenegro to take advantage of the option of “receiving money” have been provided. However, the decision to expand services to our country is part of this company’s business policy.

The government recently formed an operational team that includes the CBCG and is tasked with continuing communication with Pay Pal, as well as being tasked with considering options for cooperation with other companies that provide services on the electronic sending and receiving of money, with the aim of improving the overall environment for e-commerce.

The creation of an environment favourable to the operations of the growing number of start-ups in Montenegro has raised the issue of electronic payments from abroad for goods and services sourced in Montenegro. What is your stance on the liberalisation of financial transactions?

– The powerful penetration of technology in conducting business activities contributes to increasing competitiveness, efficiency and profitability, not of the enterprises that apply it, but also of the national economy. Considering the importance of electronic operations on the international market, it has rightly earned the status of representing the development potential of the national economy.

It is evident that the development of the banking sector in Montenegro is already influenced significantly by the applying of financial technology that changes the business models of traditional providers of financial services, with which the efficiency of the operation of service users improves significantly. However, when it comes to the applying of e-business operations within micro, small and medium-sized enterprises in Montenegro, the situation is notably different, possibly also due to insufficient education regarding the benefits of e-business operations. The CBCG supported activities related to the liberalisation of financial transactions and recommended that all relevant institutions first analyse this issue in detail.

Sustainable and inclusive economic growth, which will contribute to reducing the development gap of the country compared to the EU average, and to increasing...
Read more

We are committed to building an attractive business environment, and especially creating a competitive and stable tax system that's based on simple and clear...
Read more

Setting the New Benchmark in Adriatic

Portonovi aims to promote the Bay of Kotor, and Montenegro as whole, across the entire world. It will provide the very best in service...
Read more

Crnogorski Telekom is an innovation leader in the area of smart solutions and the digitalisation of Montenegro, and it wants to be a reliable...
Read more

Montenegro will catch up with Western European standards within a very short period of time. NLB Banka is actively driving this process and is...
Read more

Today, the European Commission adopted its 2021 Enlargement Package, providing a detailed assessment of the state of play and the progress made by the...
Read more