Miodrag Poledica, Secretary Of State At The Serbian Ministry Of Construction, Transport And Infrastructure

The European Commission decided this March to adopt a tenth freight corridor, entitled the ’Alpine-Western Balkan Corridor’, which represents a great success for Serbia, as the only non-EU state to be traversed by one of a total of 10 rail freight corridors. It is also an example of the positive evaluating of the policy of the Serbian government and the Ministry to connect Serbia to key European transport routes.

This month we spoke with State Secretary Miodrag Poledica about the transport and logistics plans of the Serbian Ministry of Construction, Transport and Infrastructure.

The Berlin Process has opened up one of the most important lines of cooperation within the region and with the EU: the construction of transport capacities. How much strategic progress has been made on this front?

– The Republic of Serbia is very active within the framework of the Berlin Process, where it is working on all measures that will enable bilateral issues to be resolved, economic cooperation improved and a sound basis for sustainable growth to be established.

Through meetings between prime ministers in Berlin in 2014, Vienna in 2015, Paris in 2016 and Trieste in 2017, the Berlin Process has focused mainly on the economic dimension of connectivity, in the area of transport and energy infrastructure (Connectivity Agenda), where there were the most tangible projects and initiatives.

Within the framework of the connectivity agenda, the EU finances projects that are of undoubted regional significance by providing major grants from EU funds: IPA (Instrument for Pre-accession Assistance), WBIF (Western Balkan Investment Framework) and CEF (Connecting Europe Facility), while sometimes these funds are provided in combination with other sources of financing, such as the EIB, EBRD, World Bank and the budget of the Republic of Serbia.

The projects identified are those that are located along the main routes of the EU’s TEN-T network and simultaneously represent the EU’s Core Network Corridors.
Under the auspices of the Berlin Process, “soft” measures have been defined that the Western Balkan participants should implement between themselves, but also with EU member states, in the field of infrastructure and economic development.

For the Republic of Serbia, national soft measures relate to the implementation of measures enabling the border control of trains via a one-stop-shop, with the aim of shortening the times that trains are retained at border crossings. When it comes to regional soft measures, they relate to the opening up of the railway services market, enabling intelligent transport systems, coordinated maintenance of transport infrastructure, reducing the impact of climate change on infrastructure etc.

Moreover, regional soft measures also encompass the defining of a network for the implementation of European freight corridors under the EU-Rail Freight Corridor-RFC Regulation, which the Republic of Serbia is involved in with regard to the establishment of a new tenth freight corridor, dubbed the Alpine-Western Balkan Corridor.

With the help of the European Union and other donors, we expect significant funds to be invested in our infrastructure projects during the EU pre-accession phase of the Republic of Serbia

When should a list be compiled of the most important freight routes which Serbia is currently working on or intends to work on, which projects would you single out in particular?

– The priority projects for the Republic of Serbia, which are significant for the region, and thus also the EU, are completion of the remaining sections of highways E-80 and E-75 (Corridor 10), completion of the construction of the Belgrade Bypass, further construction of Highway E-763 to the border with Montenegro (Corridor 11), launching phase one works on the Niš-Merdare (Pristina)section of Highway E-80, reaching agreement with neighbouring countries regarding the route of the future Belgrade-Sarajevo highway, i.e. the Belgrade-Timisoara Highway, with which will will complete highway links with the entire region. 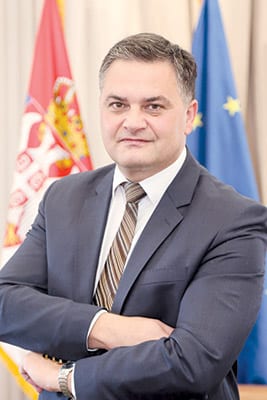 When it comes to railways, the priorities include the intensification of construction of the Belgrade-Budapest high-speed rail link (works are underway between Belgrade-Stara Pazova and Stara Pazova-Novi Sad), the earliest possible launch of the electrification of the Niš-Dimitrovgrad railtrack, with the installing of bypass tracks around Niš (a financial contract was signed in January 2018), reaching agreement for works on the reconstruction and modernisation of the remaining sections of Corridor 10, covering a distance of around 370 km, as well as the continuation of works on the reconstruction of the “Bar rail route”, along the section from Valjevo to Vrbnica (Montenegrin border),covering a distance of around 210 km, and other works.

In addition to this, preparatory activities are also planned on the modernisation and reconstruction of the Belgrade-Šid-Croatian border rail track, covering a distance of around 80 km, considering that a significant increase in passenger and freight flows is expected along this route.

These mainline tracks form part of the railway Corridor 10, which is the most important rail corridor not only for Serbia, but for this part of Europe generally, given that it forms part of the indicative expanded TEN-T core European transport network.

The fact that Serbia is one of the countries with a key transit character creates the opportunity not only to increase the volume of goods transportation, but also to build new logistics zones and attract investment in zones located alongside the main corridors.

The European Commission has allocated significant funds to support projects aimed at connecting transport infrastructure in the region. What will they primarily be used for in Serbia?

– Considering that we’ve made progress with the construction of the road infrastructure network, the strategic goal in the period ahead will be the reconstruction of the rail network, in accordance with the recommendations of the European Commission and the conclusions of the Paris Conference, with the aim of reducing carbon emissions and shifting haulage from roads to environmentally cleaner transport systems and intermodal transport. As strategically important projects, we can highlight the Velika Plana-Niš project, for which technical documentation is being prepared using EU funds.

Apart from this project, we would also highlight reconstruction and modernisation projects on mainline rail routes from Belgrade to the border with Croatia and from Niš to the border with Macedonia, along Corridor, 10 and the section of the Bar rail route from Valjevo to the Montenegrin border.

How would you assess the Ministry’s cooperation with international financial institutions on the implementation of Serbia’s transport and logistics plans?

– Strategic documents have defined development plans for the construction and improvement of transport infrastructure, the implementation of which requires funds from international financial institutions. Given that Serbia represents a favourable investment destination, cooperation with international financial institutions is heading in the right direction and we don’t currently have problems with the implementation of projects, as we had in the past.

It can be considered that we are probably the only country in the region, but also further afield, that successfully manages various sources of financing in the implementation of transport and logistics projects (EIB, EBRD, World Bank, EU IPA funds, WBIF, CEF, bilateral agreements with Russia, China, Azerbaijan and Kuwait, as well as combinations among them).

We expect the greater application of public-private partnerships for the implementation of projects in the construction of logistics centres, container terminals, ports and railways

In your opinion, what will the introduction of a concessionaire in the management of Belgrade Nikola Tesla Airport mean for the further development of air transport in Serbia?

– A 25-year concession agreement, with development through construction and reconstruction, as well as the maintenance and management of Belgrade Nikola Tesla Airport JSC was signed on 22ndMarch 2018 with the most favourable bidder – Vinci Airports from France. The Nikola Tesla Airport concession will enable Belgrade’s airport to develop even faster, in order for Serbia to become a regional hub for air traffic. The value of the concession’s “up-front fee” is 501 million euros, while investments in development over the next 25 years will amount to 730 million euros. The annual fee totals approximately 10 million euros per year for the duration of the concession.

Where do you see room for applying public-private partnerships on infrastructure projects?

– The application of public-private partnerships enables the reduction of fiscal pressure on the budget, the acceleration of infrastructure investments, improvement of services and reductions in their prices, with the partnered sharing of risk in realisation, and later also in project exploitation.

The Ministry is exerting efforts to find waysto sustainably finance all infrastructure projects that are important for the development of the Republic of Serbia either through secured funds in the Serbian budget or through loans from international financial institutions.

There are certainly projects with a very high investment value. One such project is construction of the Highway E-761 section from Požega to Boljar-Montenegrin border. In construction terms, this is the most difficult part this corridor, covering a distance of 107 km. Along the route of this corridor there will be 97 bridges (total length of 27 km), 58 tunnels (total length of 19 km) and four major junctions. The value of construction is estimated at 1.5-1.8 billion euros. A document on this project was signed on 29thMarch 2018with Chinese partners, with which it is planned to define a model for the financing and construction of the Požega-Boljar section. The joint work with these Chinese partners will be based on the public-private partnership model.