Marko Čadež, President Of the Chamber Of Commerce & Industry Of Serbia

Austria tops the list of countries whose companies invest in Serbia: it ranks first in terms of total foreign direct investment, which totalled three billion euros in the last decade and a half, and third in terms of the number of projects implemented. Around 500 Austrian companies that operate here provide a large contribution to the growth of Serbian exports, which last year recorded a record level of almost 340 million euros

We discussed economic cooperation between Serbia and Austria with Marko Čadež, president of the Chamber of Commerce & Industry of Serbia.

How much have Austrian companies invested in Serbia in recent years?

– From 2010 to year’s end 2016, according to the official statistics of the National Bank of Serbia, Austrian companies invested almost 1.7 billion euros in the Serbian economy, through initial investments from the source country and during the course of operations on our market, which ranks Austria second on the list of the largest investor countries during that period.

What are the main characteristics of these investments in terms of sectors and geographical distribution?

– The structure of Austrian investments in Serbia is quite diverse according to all parameters. Viewed in terms of sectors, the most has been invested to date in telecommunications and the finance and insurance sector, followed by trade in petroleum products, real estate, the wood/furniture industry, the auto industry, agribusiness, transport, and, in recent years, logistics and tourism (projects of the Soravia Group, Falkensteiner, GebruderWeiss, Immofinanz etc.).

Austrian investments first arrived in banking and insurance, not only because of the profitability of the sector but also as a logical precursor to other investors. Following banks, insurance companies, telecommunication operators and construction companies, investments then came in production.

Today such companies include Rauch, Knauf, Tondach, Kronospan, Swarovski, Gierlinger, Agrana etc. While Gierlinger is expanding its operations in Sremska Mitrovica, company Vossloh Kiepe has arrived in Novi Sad and announced that it will launch production of air conditioners for the rail sector, intended primarily for export, while the Zumtobel Group, a world-renowned manufacturer of the most modern LED lighting, will invest around 30 million euros in Niš.

The list of individual Austrian investments includes investments worth hundreds of millions of euros (i.e., the total investments of Mobilkom Austria – initially and during the course of operations – are approaching a billion euros, according to company data) to investments in dozens of SMEs worth several hundred thousand euros.

Austrian companies have participated in privatisations, joint ventures and both greenfield and brownfield investments.

How much do Austrian companies operating in our country contribute to the growth of GDP and exports?

– Austrian companies account for a significant part of the trade exchange between the two countries, which exceeded 867 million euros last year, and feature on the lists of the largest exporters from Serbia and the largest importers from Austria.

Around 500 Austrian companies operating here provide a major contribution to the growth of Serbian exports, which last year recorded a record level of almost 340 million euros. The highest level has so far also been recorded by imports – at 528 million euros – which is why Serbia continues to be burdened by a trade deficit.

Serbia sells industrial products to Austria the most, which account for almost 85 per cent of our exports. The biggest exporter among Austrian companies is Swarovski, followed by Motoren Werke (today a member of the ATB Group) and Eaton Electric, while Henkel is also highly ranked.

We are interested in having more Austrian investments in production sectors – metal, food, the auto industry, the furniture industry – in the coming period, which would contribute to increasing the exchange between the two economies and our exports

How capable are Serbian companies to become suppliers of Austrian partners and can you identify some good examples or trends?

– There are both investors and buyers of our products in Serbian companies – producers have reliable suppliers and partners. Alongside all other advantages, Serbia as a destination for doing business and investing has another great plus – a base of secure suppliers.

Our companies have an industrial tradition and knowhow, are flexible, ready to learn, able to satisfy the requirements of the markets of developed countries, to respect the sought quality, processes and deadlines, and to deliver high-quality goods and services on time and at competitive prices.

Their inclusion in the supply chains of large systems, whether Austrian or other multinational companies, not only creates channels for them to sell their products but also creates new opportunities for them to raise their capacities, develop and continuously improve the quality of products and processes, in order to maintain these arrangements.

The Chamber of Commerce & Industry of Serbia, via specially created support tools, helps exporters to strengthen their capacities, produce and export more products, adopt the necessary standards, connect with potential partners – investors and customers abroad, but also to include themselves in the production and supply chains of large systems.

Our companies will participate in a business forum in Austria at the end of November. Apart from forums and bilateral meetings at which they receive the opportunity to establish contacts with dozens of foreign companies in one day, the CCIS has also developed a special service – organising days of suppliers for multinational companies that represent an opportunity for our companies to present their operational capacities and references, while enabling foreign corporations to access the highest quality suppliers.

For example, the Zumtobel Group’s decision to invest in Niš was preceded by a supplier day event at the CCIS, at which this Austrian company convinced itself that local metal and plastic processing companies are capable of being included in its supply chain.

Where do you see possibilities to further improve our economic cooperation?

– In talks to date, Austrian business leaders have shown particular interest in expanding their operations in the fields of infrastructure, industry, energy, especially renewable energy sources, as well as in the implementation of environmental projects related to the collection, processing and recycling of municipal waste and water treatment. 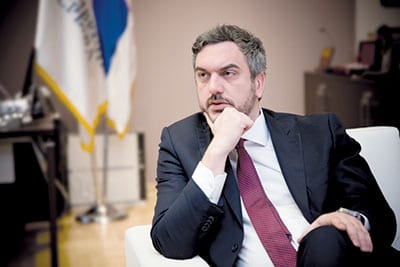 We are interested in having more Austrian investments in production sectors – metal, food, the auto industry, the furniture industry – in the coming period, which would contribute to increasing the exchange between the two economies and our exports. To date, there has been insufficient utilisation of opportunities for investment in agriculture and cooperation, through the transfer of Austrian knowledge and technologies, in the production and processing of food, especially organic production, where Austrian experiences and development models would be invaluable to us.

We see great potential for improving our economic relations in the services sector: through investments in tourism, especially spa tourism, engaging our construction companies on jobs in Austria, which would also create room for increased sales of construction materials and, of course, in IT. Serbian IT companies have international experience and are capable of collaborating with their Austrian counterparts and on the world’s most complex projects, and to participate jointly in third markets.

Apart from bringing capital and creating export channels, Austrian investors employ our people and engage our companies, as well as transferring their technologies, standards and business models from the developed world

Are you satisfied with the partnership with the state when it comes to institutional changes and respect for the voice of the economy in selecting legislative solutions? Recently, you symbolically submitted the latest quarterly analysis of regulations to Prime Minister Ana Brnabić. What are the key changes that are being sought by businesspeople?

– The sixth quarterly analysis of the implementation of regulations of importance for the economy collected almost 60 tangible initiatives from business leaders for changes to existing regulations, the adoption of new regulations and the improvement of practices in all sectors of the economy, with the aim of relaxing and improving conditions for doing business.

The quality of these initiatives is in the fact that they are not the product of some theoretical, office-based or institutional analysis, but rather that they come from practice, from businesspeople who live with and apply regulations on the ground, in their companies and factories, at tax counters, customs offices etc. who are confronted by very specific problems that hamper their operations.

They gain additional strength due to the fact that they were collected and coordinated through a system of 17 regional parliaments in which business leaders themselves for their representatives were selected by the owners and managers of about 800 companies, and through the system of 19 CCIS associations and 136 groups within which more than 1,600 companies are active on a daily basis.

Through improved dialogue between the economy and the state, the government has shown not only that it is ready to hear the voice of the economy, but also to appreciate it, while business leaders are encouraged by the fact that they have someone to address, and the Chamber of Commerce & Industry of Serbia – as a business association representing all business people and entrepreneurs – has, through its own reform, built mechanisms and instruments for representing and supporting the economy, and has demonstrated the purpose of its existence in the best possible way.

In less than a year, more precisely since December 2016, in cooperation with the government, competent ministries and other state institutions, as many as 25 economic initiatives have been realised, sent through quarterly analyses and resolved issues of interest to the daily operations of our members.

What kind of results, from the perspective of entrepreneurs, has the introduction of dual education so far brought?

– The results of the initiative of the economy to introduce dual education, which the CCIS has worked on with devotion in the past two years, are best expressed in figures. Around 3,000 pupils, 60 schools, 19 educational profiles and around 200 companies from the mechanical, electrical, textile, military and wood industries, as well as transport and trade, are included in the dual education pilot projects that we implement with the great support of Austria, Germany and Switzerland. According to CCIS surveys, around 1,800 companies are interested in cooperating with schools.

What is important for the further application and development of this concept is that the government forwarded a draft law on dual education to the parliament in early October, the drafting of which included the active participation of the CCIS, representing the views of businesspeople. With the adoption of this law, dual education will step out of the experimental phase, in which pilot projects are implemented, and become part of the regular education system.

The Chamber of Commerce will play a significant role in its implementation, begin with its engagement in the drafting of bylaws and training trainers who will in turn train instructors from companies, with the project-based support of the Austrian Chamber of Commerce.