A Smoked Ham For Poetry

Charles Simić is among America’s greatest poets. In late August he spent two days in his hometown of Belgrade, whilst on his way back from Macedonia, where he received the “Golden Wreath of the Struga Poetry Evenings”, one of Europe’s most important poetry awards, in recognition of his entire poetry opus.

Simić was the guest of publishing house “Arhipelag”, which in recent years has published his books of essays “Dime-Store Alchemy”, “Gledaj dugo i netremice” and “Tamo gde počinje zabava”, as well as the book of selected and new poems, “Awaiting Judgment”. The literary evening that was held during his stay in Belgrade is considered as the Serbian capital’s top cultural event of the summer.

Born 9th May 1938 as Dušan Simić, he moved from Belgrade to America in 1953. He graduated in American literature and later lectured it and creative writing at the University of New Hampshire, where he lives with his wife. He has a son, a daughter and two grandchildren, and writes essays and critiques, and has served for a long time as a critic of The New York Review of Books.

Simić’s books have been translated into all major world languages and he has received numerous awards, including the MacArthur Foundation Award, the Pulitzer Prize, the American Academy Award, the Prize of the Serbian PEN Centre for translations of Serbian literature, the Robert Frost Medal for distinguished lifetime service to poetry, the Zbigniew Herbert International Literary Award and others.

Simić’s visit to Belgrade provided us with the opportunity to ask him to recall the period before he became famous, his memories of Belgrade and his beginnings in poetry.

You were not quite three years old when World War II came to Serbia and Belgrade was bombed. You then lived in the city centre, in Majka Jevrosima Street. Did the bombs bypass your neighbourhood; what do you remember of those times?

– Nope. A bomb fell on a building across the street. I was thrown out of bed and remember lying on the floor awake, with broken glass all around me and the room brightly lit from the fire.

Does your primary school still exist today? You were the first post-war generation. What did you learn about back then, what was your first teacher like? 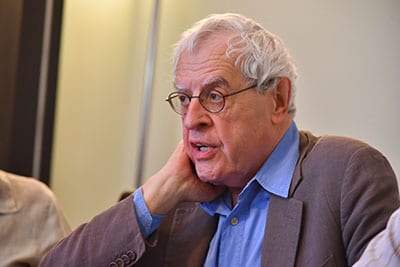 – It does, but it’s some other kind of institution. All I remember is that I hated being there and missed roaming the streets with my pals, as we did during the war.

You revealed in one interview that your father had a great library. What did you read as a boy?

When you left Belgrade with your parents as a fifteen-year-old boy in 1953, Yugoslavia was at the start of its rise as a nation. What do you think your life would have been like if you’d stayed in Belgrade?

– My father was in Italy when the war ended and he immigrated to America in 1950, so it was just me, my mother and my younger brother who left Belgrade in 1953. I have no idea what would have happened to me if I’d stayed. However, if you were to pose that question to people in my neighbourhood, they would tell you that I would have ended up in jail.

Prior to arriving in America, you lived in Paris – meaning a new language and a new everything. How did you find it? Did you adapt easily?

– We were there just one year and the French I knew I’d learned in Belgrade, so I had a very hard time. As for adapting, even Serbs who’d lived in France for 20-30 years were regarded as dirty foreigners by the French.

My father was in Italy when the war ended and he immigrated to America in 1950, so it was just me, my mother and my younger brother who left Belgrade in 1953. I have no idea what would have happened to me if I’d stayed. However, if you were to pose that question to people in my neighbourhood, they would tell you that I would have ended up in jail

Your schoolmates in America almost certainly didn’t even know where Yugoslavia was. How did they accept you; which school did you attend?

– The first school I attended (for one year) was in New York City, and for my final year, I was in a suburb of Chicago. The teachers in both places knew where Yugoslavia was because World War II brought a great many Americans to Europe as soldiers and they knew their geography. In those days, immigrants were more readily accepted. I and my brother made friends easily.

How did you fall in love with literature? Was it perhaps thanks to some teacher?

– Although I was already a passionate reader of literature, I did have a very good teacher in the last semester of high school. He made us read modern American and European fiction and introduced us to writers I’ve never heard of before.

Is it true that you started writing poems because of a girl? Do you remember those poems? How did she react to your verses? 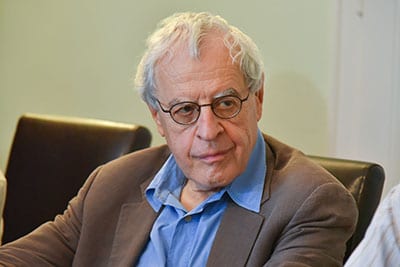 – It wasn’t just one girl. I used the same poems over and over again, just changing the name. Thank God, I don’t remember those poems. As for my sweethearts’ reactions, they were surprised, of course, delighted, but I’ve no idea what they really thought.

It states in your biography that you worked to support yourself during your studies. Do you recommend that today’s youth follow your example?

– No, I wouldn’t recommend that. Many of my students now work the way I once did, because it’s become very expensive to go to college, and I feel sorry for them. They have hard lives.

Who was your first publisher? How did Americans react to verses written by someone whose native language isn’t English?

– My first poems were published in 1959 in The Chicago Review, a very fine literary quarterly that is still published. The readers read my poems, but they had no idea that my native language wasn’t English because the magazine didn’t tell them that.

In the second half of the 1960s, when your poetry career began, was it known here in Serbia that the poems of one of our own were being read and praised somewhere in America?

– Yes, since I was translating Popa, Lalić, Pavlović, Simović and other Serbian poets who knew what was going on in American literature.

You received the 1990 Pulitzer Prize for your collection of poems “The World Doesn’t End”. Today, in the context of the threat of World War III, do you still think the same – that the world will persevere?

– The title of that book doesn’t refer to our suicidal tendencies as a species. As you know, in the 1950s and ‘60s Americans expected a nuclear war with the Soviet Union and built shelters. Today we are all pessimistic about the future, but we have no idea what sort of horror will bring about our demise.

Although I was already a passionate reader of literature, I did have a very good teacher in the last semester of high school. He made us read modern American and European fiction, and introduced us to writers I never heard of before

You publicly advocated against nationalism during the Yugoslav wars of the 1990s. After 11th September 2001, you also tried to persuade your compatriots that going to war against Iraq would be a mistake. You were not alone in your opinion, though it seems that those who think differently, those who are destroying the world, are stronger. Could you please comment on this?

– I never thought that my views would make the slightest difference, but for my own peace of mind, I had to say what I think. Just before the beginning of the Iraq War, a bunch of us poets got together and wrote an anti-war statement that was published in a newspaper and which I happened to come across a few months ago. What surprised me about it is how prescient we were. We knew it was going to be a complete disaster and it was. At the time it came out, many people were angry with us, and none of them ever came afterwards to tell us that we had been right.

With your translations of the works of our writers into English, you have contributed greatly to our literature crossing the ocean and making it to American bookshops. Promoting the literature of a small nation is almost certainly something of a Sisyphean task, particularly given the fact that American readers are orientated towards the American market. But what is your impression: do Americans read our authors’ books?

– Vasko Popa, Aleksandar Ristović and Radmila Lazić are known to readers of poetry, while Danilo Kiš is known to those interested in European fiction. Vladimir Pistalo’s book on Tesla was well received, but that’s pretty much it.

At the time when you translated the poems of Vasko Popa, you were interested in our folk poetry, and since then its influence on your poems has been evident. Was there not a risk, for example, that the metaphors of our folk lyrics would not be understood in America?

– I was not interested in folk poetry, but rather in folklore – not just in Serbia, but in the United States. The few metaphors I used I translated into the American idiom so that it would be understood.

You write in English. However, considering that you know the Serbian language, why do you decline to translate your books into Serbian?

– Because I can’t. My knowledge of written Serbian is that of a fifteen-year-old who never did well in school and who rarely spoke his native language during the sixty-four years that he lived in the United States.

The obligatory epithet beside your name is “America’s greatest contemporary poet”. How does the American public relate to the great contemporary names of its culture?

– Those labels mean nothing. We adore writers and forget them after they die. My students are unlikely to have read Hemingway and Ginsberg, and I see no reason to remedy their ignorance. That’s not how it used to be when I was growing up, but now it’s a commonplace observation.

The media here in Serbia describe you as an example of someone who’s realised the so-called American dream in his lifetime: you started from scratch and became one of the most famous living poets. Would you like to share your recipe for success with CorD’s readers?

– Considering that I had my first job when I was sixteen and that I’m still working at the age of seventy-nine, and will be in the foreseeable future, I doubt that I can be used as an example of success. As for poetry, getting recognition is nice. Once a reader sent me a smoked ham from Virginia, a famous vineyard sent me a case of wine from California and a butcher sent me some sausages from Detroit. What more can one ask of the world?