According to experts, Xi Jinping will very likely secure another five-year term as China's leader, at the upcoming National...
Read more

Believe it or not, but we are two weeks away from kicking off Belgrade Irish Fest. It will be festivals 7th edition, and we can’t wait to dig into and enjoy rich Irish culture during St. Patricks season!

We recently spoke with Jas Kaminski, Belgrade Irish Festival founder and director, to get to know the person behind the event which deservedly earned its place among the top cultural annual events in Belgrade and Serbia.

How and why Jas Kaminski from Ireland decided to set up an Irish festival in Serbia?

Like a lot of the best things in life, by accident!

Before moving to Belgrade, I had been working as a communications specialist in international development organisations in Asia and Africa. While working in these far off places, I had missed my home and the amazing continent of Europe which I found myself back in again, via Belgrade.

Well, I had developed a love for the Balkans through an old stone ruin of a house I had bought some years earlier on the peninsula of Lustica, in Montenegro. Lustica reminds me of the less populated parts of the west of Ireland, except in Montenegro the weather was much better than Connemara, (a region in Ireland), and I made a secret pact with warm weather!

It’s not that farfetched! Europeans have been moving south towards the warmer climes of the Mediterranean for thousands of years. Except, I suppose, nowadays they go home after two weeks holidays! In my case, I wanted to stay a little longer to quarry my own roots since my father was born in Poland, and I was curious too to learn more about my Slavic roots and culture.

After some time I inevitably made my way to the much acclaimed and historic city of Belgrade, and immediately liked the ‘old lady’; the buzz of a port city located on strategic crossroads between Asia and Europe; I felt the many exciting things to discover here, and still do.

I needed to find something to do if I was to stay here. While figuring this out over a long period of depleting my savings I, quite literally  – and following hearing two old childhood friends on Irish radio on the net talking about their latest internationally successful film – stumbled upon an Idea of hosting an Irish Film Festival in Belgrade.  And that is where this story started. 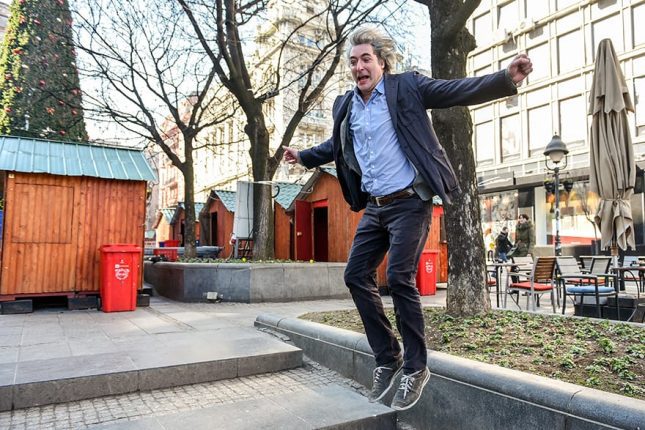 Belgrade Irish Festival has done a lot to promote Irish culture in Belgrade during the past seven years since it was established. Are you satisfied with the presence of Irish culture here?

Yes, of course, I am pleased.

It is a remarkable feat of that each year Belgrade hosts a burst of contemporary Irish arts in the city centre for a period of just over a week. If you sat down and tried to plan it, you would be laughed at, and no one would take you seriously.

But we are here seven years later and with a growing program of contemporary Irish arts in some 50 separate events taking place throughout the city in March.

In recent years there is a new breed of Irish & Serbian cooperation in digital technologies. And along with the Irish Embassy this year we are working and adding on a one-day digital conference with participants and events designed to share experiences and highlight opportunities in the Creative digital industries in Ireland and Serbia.

One of Ireland’s most successful animation companies, Cartoon Saloon will particulate as well elements from the new ‘Serbia Creates’ initiative and Enterprise Ireland. The conference will take place at the new Kinoteka building on the 12th of March.

This year BFI has gone an extra mile and is bringing 2016 Oscar nominee director and screenwriter Lenny Abrahamson as a special guest. Very exciting! Will his movies have screenings during this year BIF?

It is with pleasure that one of my childhood friends, Lenny Abrahamson – (Oscar-nominated Room 2016), who, you could say, inspired the Belgrade Irish Festival 8 years ago – accepted our invitation this year, and will attend the opening film and screening of his latest feature, The Little Stranger in Kinoteka.

We are really pleased to be screening Lenny’s latest movie, The Little Stranger, and one from his back catalogue, ‘Garage’ as part of a week of Irish Films and documentaries, and joined by several other visiting Irish film directors, producers and editors taking place in Kinoteka, 11 – 17th March.

Lenny is a very busy guy, so it is was with a great surprise he accepted our invitation, seven years in the asking! He is a great movie director, and probably most people will know him from his film for the Oscar-nominated (4 categories) movie Room.

What is it about Serb’s passion for Irish culture?

The number of attendees of the Belgrade Irish Festival is growing each year. We heard more people are coming to BIF from all over Serbia, and Europe as well. Sounds like BIF has done a fantastic job so far. Do you keep setting up new goals for BIF?

We develop and grow incrementally and learn each year what works and we like to experiment each year and learn something new.

We are attracting new and bigger Irish talent because we try to manage our artists and events professionally; and we are supported by the professionalism of local cultural institutions like Kinoteka, Bitef, and Atelje 212 (this year Waiting for Godot will be staged at the famous theatre on the 13th March).

This year the newly opened and impressive National Museum will be bathed in a glow of green light on St Patrick’s Day (17th March) when the world turns its annual attention to things Irish; significant structures around the world from the Great Wall in China to the Pyramids in Egypt, the Empire State building in New York will turn green as part of Tourism Ireland’s Global Greening campaign and St Patrick’s Day celebrations.

What can you share with us about this year’s BIF program?

BIF has a very exciting program with a huge diversity of activities taking place between the 9th and 17th March, (St Patrick’s Day). There is something there for all ages and tastes!

We have a movie, visual arts, theatre and literature programs and music from local band Irish Stew as well as renowned Irish hospitality at many social events.

For the first time this year, there is an impressive open air and public exhibition – exploring comparisons in Irish and Serbian Christian art and symbols- taking place along the public walkway at Belgrade’s Waterfront throughout March.

And we have a very famous Irish Street Artist, James Earley coming to Belgrade to create a signature street art mural on a whopping 180m2 of city centre real estate. This will be the first time Belgrade Irish Festival leaves a permanent mark on the city’s already exciting landscape. And since this event that takes place in real time, over the week of the 10-16th March, we invite you (and your families) to come and see a work in progress and a festival in the making!

Happy St Patrick’s Day, and the week that’s in it.