Jelena Pavlović, President of the AmCham Board of Directors

The European conference in Belgrade, one of two traditional gatherings of AmCham Europe, represents a success for AmCham Serbia and a rare opportunity for our team to present its unique experience of Serbia to fellow colleagues from more than 40 European countries

AmCham Serbia members are optimistic about the opportunities Serbia offers for business. Still, there is much to be done to secure a level playing field and an environment conducive to growth. Jelena Pavlović, President of the AmCham Board of Directors, explains what the country’s largest independent business association sees as necessary steps and in which areas it may support the government on reforms.

How do AmCham and its members see the current reform momentum? In which areas do the biggest advancements need to be made?

– Each year, AmCham Serbia publishes our business survey with the aim of identifying key reform processes that would improve the business environment and so to promote investment and job creation. In the last two years, the highest scores were awarded to slashing the budget deficit, reducing construction permitting administration, reforms to the Labor Law, and an overhaul of e-government.

This trend continues, since Serbia maintains its macroeconomic stability, keeps cutting public debt, and maintains the high growth rates. Our survey also sheds light to the areas where little or no progress has been made – such as reforms to state-owned enterprises (SOEs), healthcare, and the judiciary are areas where a great deal of work yet remains to be done.

The current reform momentum needs to be faster paced and oriented towards businesses that are healthy, prosperous and are contributing with outstanding values to the growth of our country.

How much is the present business environment conducive to growth and new investment?

– In the last few years, we have seen a wave of the foreign direct investments in Serbia that in 2018 amounted to EUR 3.5 billion, while the official data show that the trend in 2019 is even better: the year-on-year first half influx of the FDI is 30 per cent higher. This data is highly encouraging and of huge importance for the growth of our economy. Still, private domestic investment has a huge potential, and that is an area where together we can make a lot of progress for the future.

Last year private domestic investments amounted to as little as 9 per cent of Serbian GDP, while the EU average is around 20-25%. The government should encourage businesses that already operate in Serbia to invest more by creating certainty and predictability. Our member companies seek a level playing field and a business-friendly environment, with limited government presence in the market.

Current reform momentum needs to be faster paced and oriented towards businesses that are healthy, prosperous and are contributing with outstanding values to the growth of our country

How does AmCham foster dialogue with the government?

– As the country’s largest independent business association, we have both the obligation and credibility to direct the attention of the government to the principal obstacles hindering faster and sustainable business and economic growth. Government has, to date, been receptive to our priorities, as witnessed by shared success in many reform endeavours that were part of the agendas of our nine thematic committees.

AmCham participates in numerous government groups, working on enacting new or amending existing laws and regulations. Our goal is to bring the best practices of our member companies, offer a solution which will make a positive impact on the business environment in Serbia, and to be a helping hand to the government in all the initiatives that are relevant for our membership.

How do your members reflect on their own prospects for growth and investment in Serbia?

– Based on our survey results, our members are “moderately satisfied” with the business environment and are expecting minor improvements in the near future. A total of 79 per cent of AmCham members awarded the business climate a solid score of three (out of five), a really good result given how critical the respondents had been until recently (68 per cent were “moderately satisfied” last year and 46 per cent were so the year before). 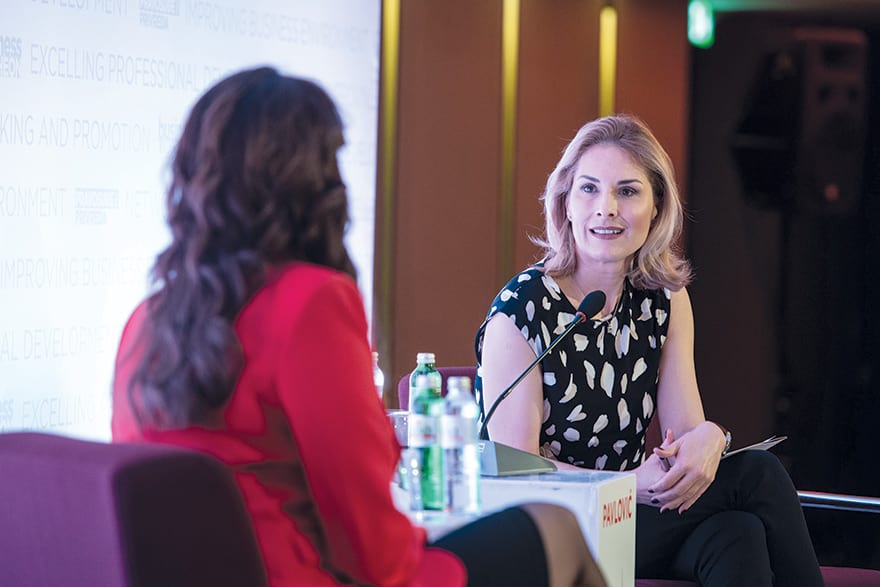 This is the second consecutive year that AmCham members have been noticeably more optimistic about their growth prospects than previously, in terms of both business performance and hiring. As many as 73 per cent of all firms expected to grow, while 58 per cent reported planning new hiring.

What do they see as the biggest challenges in their everyday activities? How much has the development of e-government removed red tape and improved efficiency?

– Year after year, institutional reforms have increasingly taken centre stage for AmCham members. Promoting the rule of law and further enabling public administration to implement regulations, enhancing the efficiency of the judiciary, and mainstreaming active public-private dialogue into lawmaking are fast becoming indispensable preconditions for any effective sectoral reforms. Therefore, we keep highlighting the importance of predictability and certainty and support all efforts to enhance the business environment through the creation of rules that apply equally to all, institution-building, and the rule of law.

Once we resolve those systemic flows, everyday challenges will become problems of the past. One of the key preconditions for AmCham members to grow in a sustainable way is the further development and promotion of e-government, e-commerce, and e-business. Some developments had been made to ease the everyday business. Still, the pace has to be faster, since, in addition to saving time and money, the replacement of paper-based routines with electronic ones will limit the scope for corruption, widely perceived to be at its most widespread in administrative procedures.

Our member companies seek a level playing field and a business-friendly environment, with limited government presence in the market

AmCham Serbia is a member of the AmCham Europe. How does this membership contribute to your work?

– AmCham Serbia is a member of the 115-member-strong AmCham community worldwide and is particularly proud to be part of the AmCham Europe network, comprised of 44 Chambers in 42 countries with 16,438 member companies and 4.2 million employees. This is an influential network, accredited by the largest business association in the world – the 3-million-member US Chamber of Commerce in Washington, DC.

Being a part of such society helps us to be updated with the latest information and trends in the global economy and politics, but also gives us the opportunity to learn and share the best practices from our network, and ultimately apply the knowledge into our everyday work.

In October, executive representatives of participating AmCham Europe members will be in Belgrade for the annual European Conference. What will this event bring to Serbia and your members? Such events may also serve for country promotion. What message should the conference’s guests bring home from Belgrade?

– There are two traditional gatherings of the AmCham in Europe network – one that is being held in Washington DC and another one being held each year in another European country. AmCham Serbia’s Executive team made a bid and won against fierce competence from five European countries and will handle the organisation of the European conference to be held in October in Belgrade.

This will be an opportunity for our team to present the achievements in the last few years, share best practices and a chance for all of us to learn from each other. Additionally, this will be an occasion for us to present the unique experience of Serbia to fellow colleagues from more than 40 European countries.

What do the members of the AmCham Serbia see as their priorities in advancing change in the Serbian institutional framework in 2020?

– The highest priority and the most important task for Serbia is the development of independent, professional, and efficient institutions that will guarantee fundamental rights to businesses and the citizens. The greatest challenges and obstacles for sustainable growth in the future remain to be corruption, inconsistent implementation of regulations, the shadow economy, a slow judiciary, and the insufficiently developed education system.

Meeting Of The American, French And Nordic Business Communities

The members of the American Chamber of Commerce in Serbia – more than 200 U.S., international and local companies – recognise the establishing of...
Read more

The conference entitled “Environmental Protection - Waste Management” was organised by the American Chamber of Commerce in Serbia (AmCham) and attended by Serbian Environment...
Read more

Zoran Petrović, President of the Board of Governors, AmCham Serbia

A Catalyst Of Economic Change

AmCham Serbia is the leading independent business association in Serbia with almost 200 of the most successful US, international and local companies from 18...
Read more

AmCham Serbia’s bid to host the European Conference in October was extraordinary, and that is why we will all be at the Belgrade Hilton...
Read more

Empathy and mutual understanding - a precondition for success
Read more

HYCU is a multinational company with offices around the world, but much of its European operation is located right here in Belgrade, an important...
Read more

Authentic Adriatic In Luštica Bay A Place To Belong

Authentic residences, The Chedi five-star hotel, beautiful beaches with a crystal blue sea, a unique gastronomic and shopping experience and an intense calendar of...
Read more