The German-Serbian Chamber of Commerce (AHK Serbia) represents the interests of its member companies, provides informational support for their operations and advocates the development and improvement German-Serbian trade and cooperation in all economic aspects. One of the tasks of this largest bilateral chamber in Serbia is advisory support to German companies upon entering the Serbian market, as well as to Serbian businesspeople when entering the German market.

SURVEY ON CONDITIONS FOR DOING BUSINESS IN SERBIA FOR 2019

AHK Serbia this year again conducted a survey on the economic environment in Serbia among its member companies, which positively assessed the economic climate in Serbia, expressing positive expectations within the scope of their own operations and satisfaction with the labour market, while 88 per cent of participating companies said that they would invest in Serbia again. 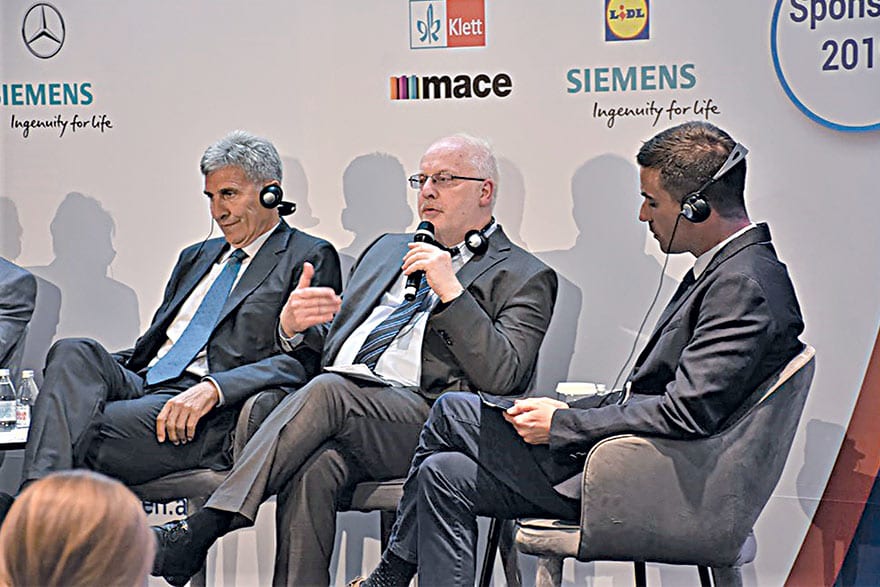 During a panel discussion that included the participation of German Ambassador to Serbia Thomas Schib, President of the Fiscal Council of the Republic of Serbia Pavle Petrović and Professor at the University of Belgrade Faculty of Economics Ljubodrag Savić, the need to intensify the fight against corruption was noted, but also the need to strengthen legal security and transparency in public procurement.

The industry of German, as one of the leading economic powers, has resisted numerous challenges over the course of time, thanks precisely to its well-trained workforce and dual education system, which has been implemented in Germany for almost a century. 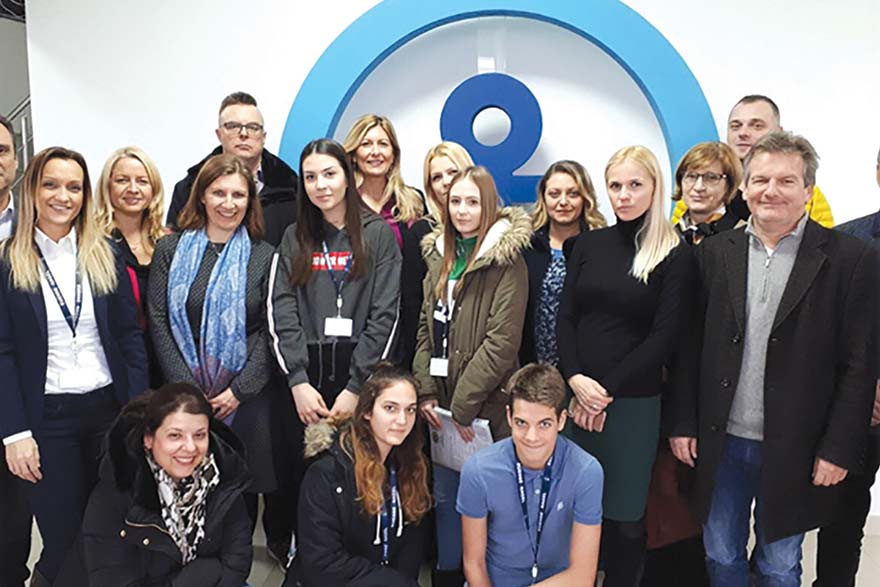 With the Law on Vocational Training in Serbia having come into force in September 2019, companies wishing to enter the new “Work-Based- Learning“ dual education system and apply for accreditation in the Chamber of Commerce & Industry of Serbia can rely on consultations and numerous services provided by AHK Serbia.

The portal for student work placement practise at member companies of the Chamber, www.ahk-praksa.com, was created on the basis of the joint AHK Serbia – University of Belgrade initiative “Model of German Operations to Work Experience”, with the aim of providing for the professional development of students and better connecting them with the labour market. 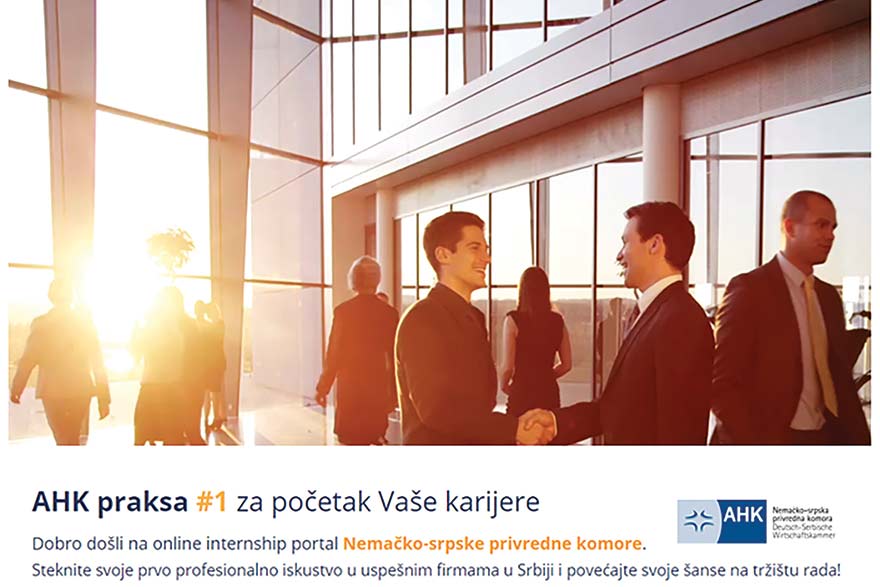 AHK Serbia President Dr Ronald Seeliger and University of Belgrade Chancellor Ivanka Popović signed a Cooperation Agreement in March this year aimed at providing professional training for students, better connecting them with the labour market and presenting the work of the Chamber’s member companies. It was announced on this occasion that the Chamber and the University of Belgrade will enable an online platform over the course of this year, through which AHK Serbia member companies, but also other companies with German capital that are not members, will regularly publish information regarding open positions for work experience practise within their companies.

The core activity of the SES programme is based on mediating expert consultants in various economic and non-economic activities worldwide. This German non-profit organisation, which is subsidised by the German Ministry of International Cooperation, deals with mediation and the organising of engagements of German professional consultants in small and medium-sized companies. 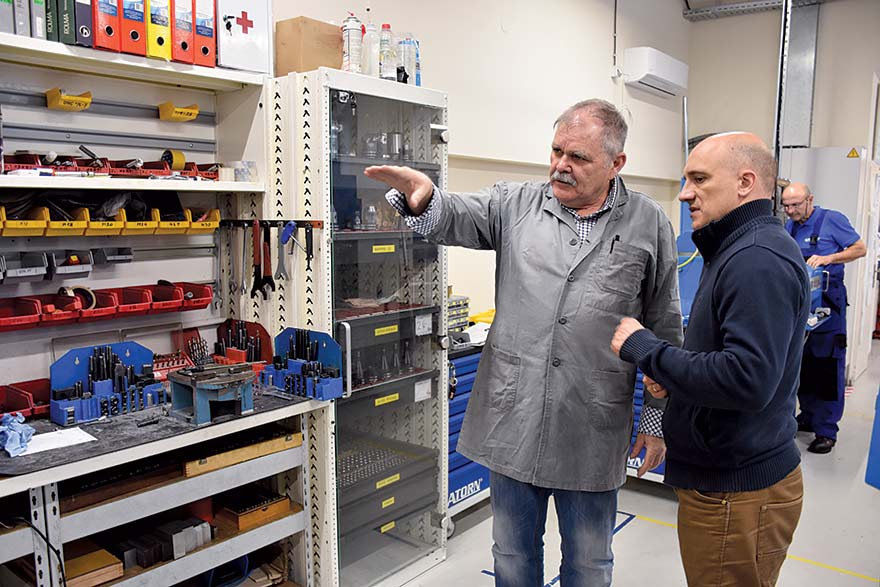 SES consultants are active German retirees, professionals with a wealth of experience who carry out their engagements with great enthusiasm and a strong work ethic. They provide consulting services without financial compensation, with the aim of assisting and promoting the organising of the operations of SMEs, public institutions, associations and educational institutions, both in Serbia and around the world.

The German-Serbian Chamber of Commerce has presented the SES programme in Serbia since 2005. As of year’s end 2018, around 250 SES engagements had been realised in Serbian companies and non-commercial institutions.

Serbia, under the patronage of the Ministry of Economy and Energy of the Federal Republic of Germany, organised a conference this May on the topic: “Energy efficiency in buildings”. 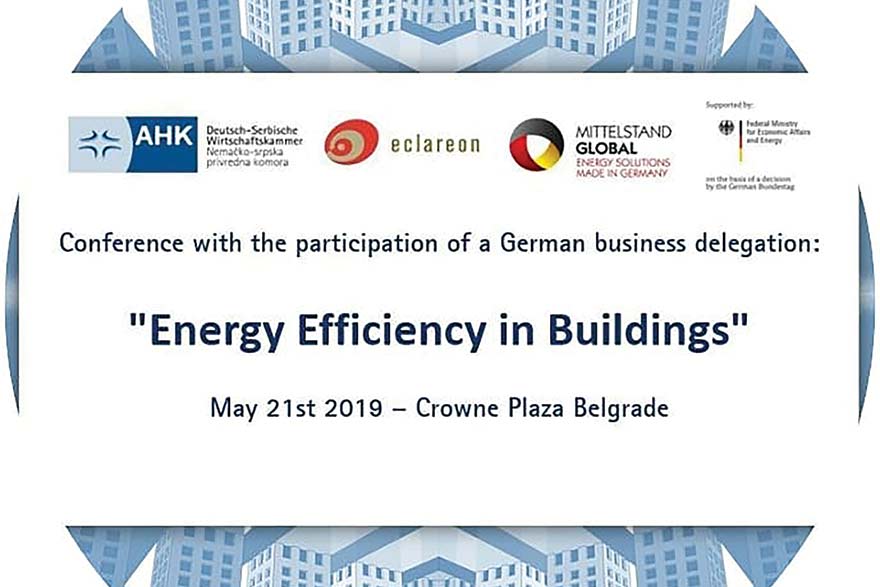 Seven German companies presented their production programmes and services in the applicable areas, after which all conference participants held B2B meetings with German companies.

For the fifth consecutive time, a regional B2B project was held on 6th June 2019 in Dortmund, organised by the German-Serbian Chamber of Commerce, representative of the German economy in the countries of the Western Balkans (AHK), the Chamber of Commerce & Industry of Serbia and the German Association for Materials Management, 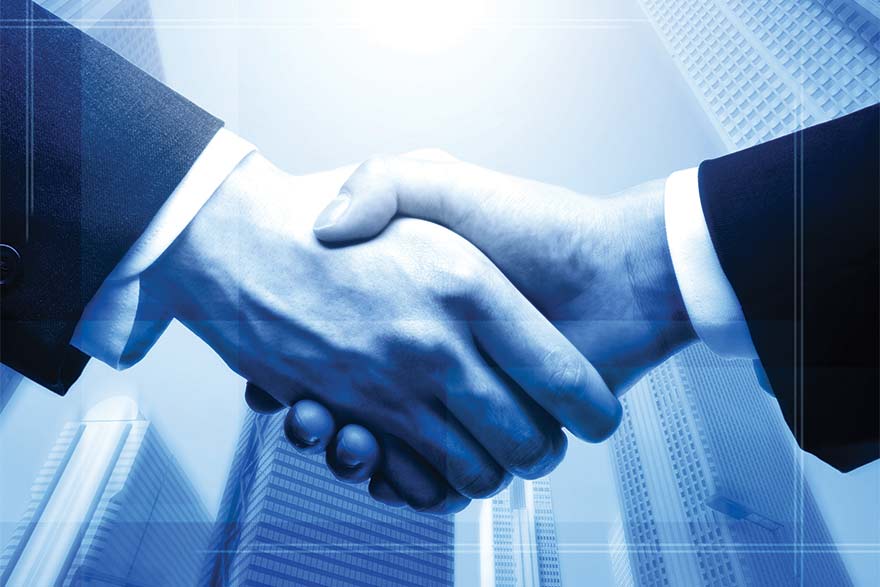 Import and Logistics (BME eV), with the aim of identifying manufacturers from the required economic areas for German companies in Serbia and the countries of the Western Balkans. The participating companies predominantly hail from the metal processing sector, automotive supply sector, plastics processing and production sector, as well as companies from the electrical engineering and electronics sectors.

German trade fairs, as the most important promotional mechanisms and sales institutions in Europe and beyond, have always occupied a significant place in economic cooperation between Serbia and Germany.

The fact that Serbia has an extremely vibrant start-up community, with numerous young and innovative companies, compelled AHK Serbia to launch research on the topic of the start-up scene in Serbia, which was presented to the public on 3rd July 2019 at Belgrade’s ICT Hub. The results of research on Serbia’s start-up scene indicate that conditions for the operations of start-up companies in Serbia are good, while the ecosystem of these companies is very interesting and comprises people who are diligent, creative, ambitious and eager to work. 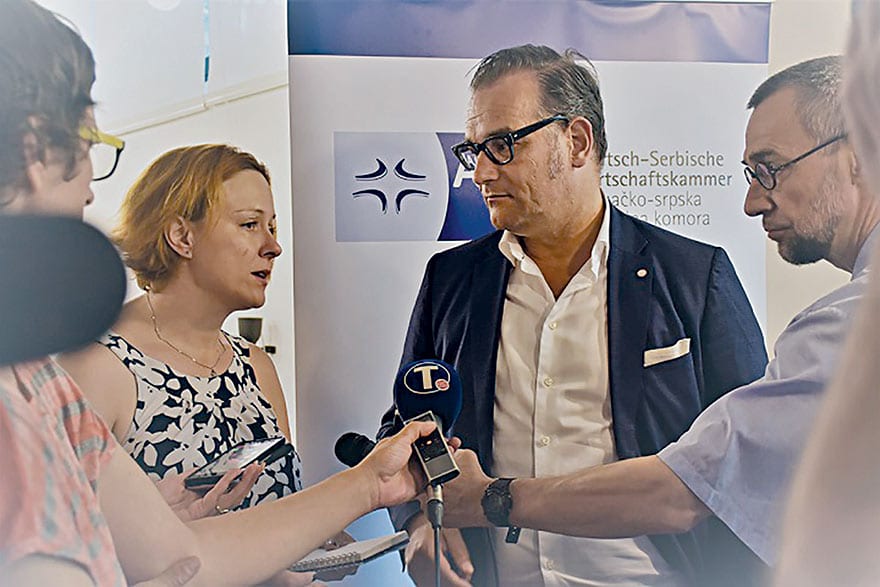 Speaking on this occasion, AHK Serbia President Seeliger noted that plenty of space exists for synergy to be established between large, older companies and start-ups, and that huge potential exists in Serbia that needs to be utilised. According to AHK Serbia CEO Martin Knapp, the German-Serbian Chamber of Commerce organises networking between German companies and young Serbian enterprises that have the possibility of using their networks – not only in Germany but also at the global level.

The formal business dinner for representatives of member companies is one of the most popular events among members. The evening opens with an honorary speaker from the domestic economic and political scene providing a short presentation on a current topic, 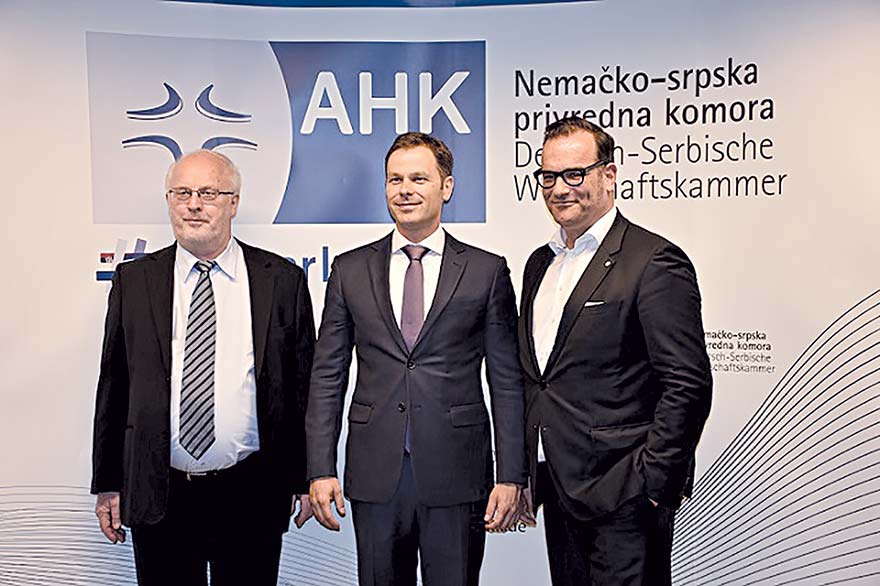 followed by discussions and a cocktail reception in a relaxed atmosphere. In April 2019, AHK Serbia had the honour of hosting Serbian Finance Minister Siniša Mali as its guest speaker, who spoke about the economic policies of the Government of the Republic of Serbia. 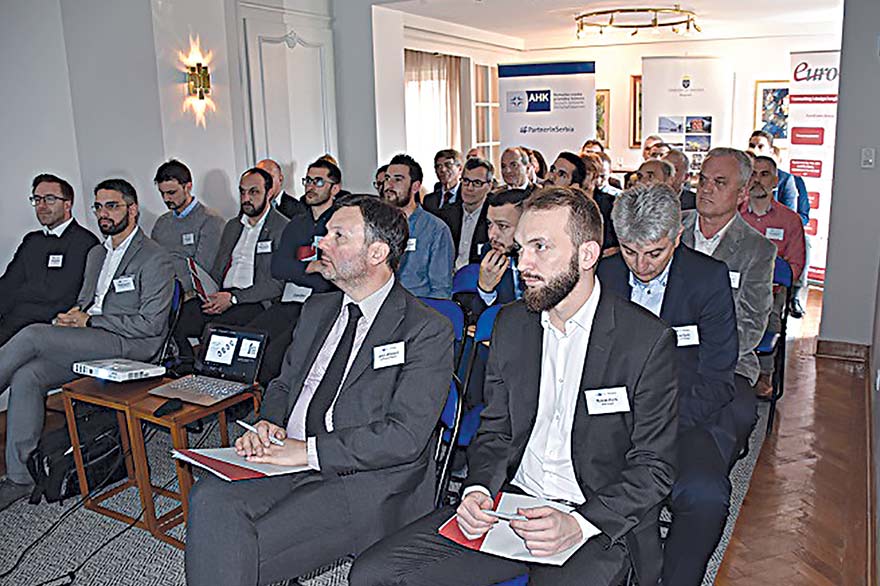 Participants in interesting, interactive members’ meetings, which have an average of around 35 participants, present shared topics with expert lecturers in their respective fields, along with exchanges of experience among colleagues from various companies.

This February saw the staging of a Speed Business Meeting attended by over 50 companies – members of AHK Serbia, the French-Serbian Chamber of Commerce (CCIFS), 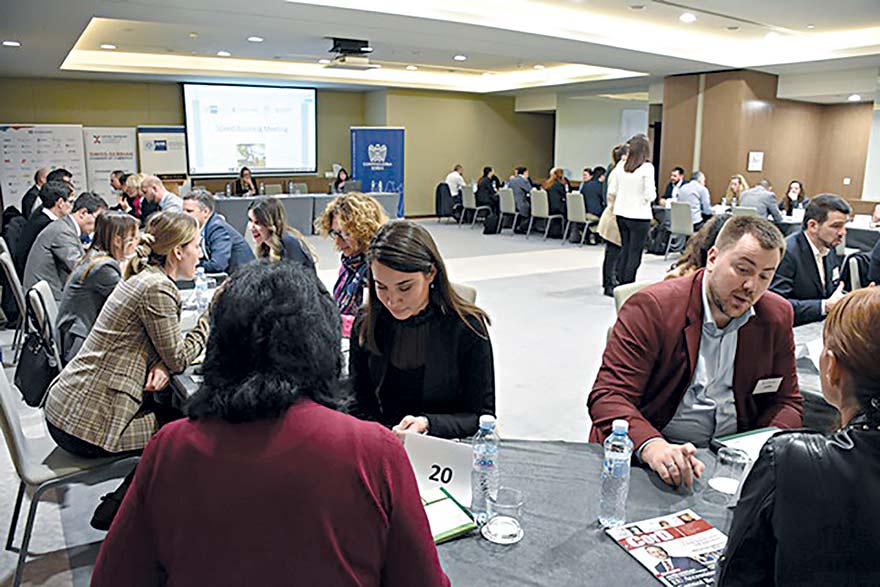 Confindustria Serbia (Association of Italian Businesspeople in Serbia) and the Swiss-Serbian Chamber of Commerce (SSCC) – aimed at making direct acquaintances and promoting cooperation between member companies of these four business communities.

The German-Serbian Chamber of Commerce brings a German tradition dating back almost 200 years to Serbia each year with the unique AHK Oktoberfest. The 9th Oktoberfest in Belgrade, and the third to be organised by AHK Serbia was held on 4th and 5th October 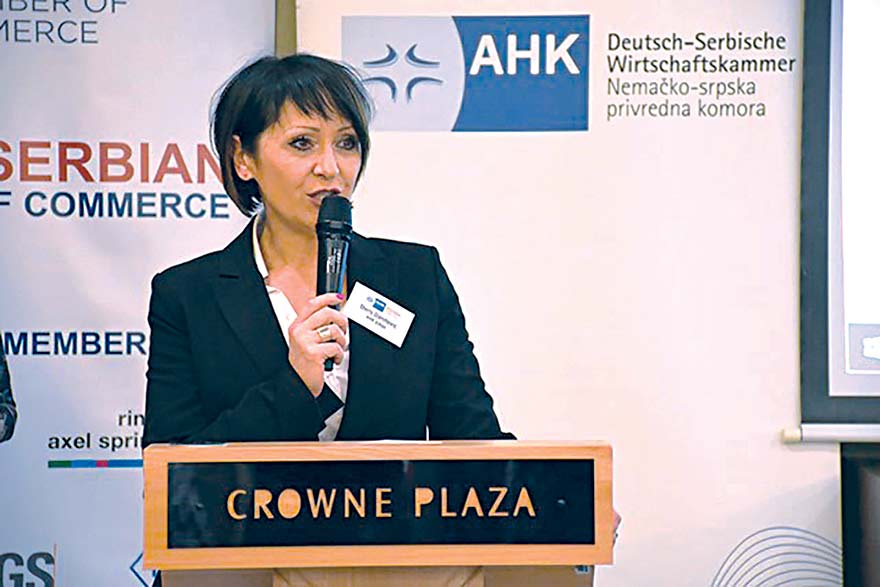 2018. Approximately 1,300 guests from the ranks of member companies, partners and guests from the world of business enjoyed Erdinger beer, various Bavarian specialities and music from Dejan Petrović and his Big Band, as well as competitions in holding multiple beer mugs and drinking beer.

The 4th AHK Oktoberfest will be held on 10th and 11th October 2019, with the support of many sponsors among member companies.

The fourth Serbian Visions Multicongress was held over the weekend of 24th-25th November 2018 at Belgrade’s Radisson Collection Old Mill Hotel. The traditional Serbian Visions event represents a kind of platform for organisations and companies committed to a better future for the country, society and economy in Serbia. 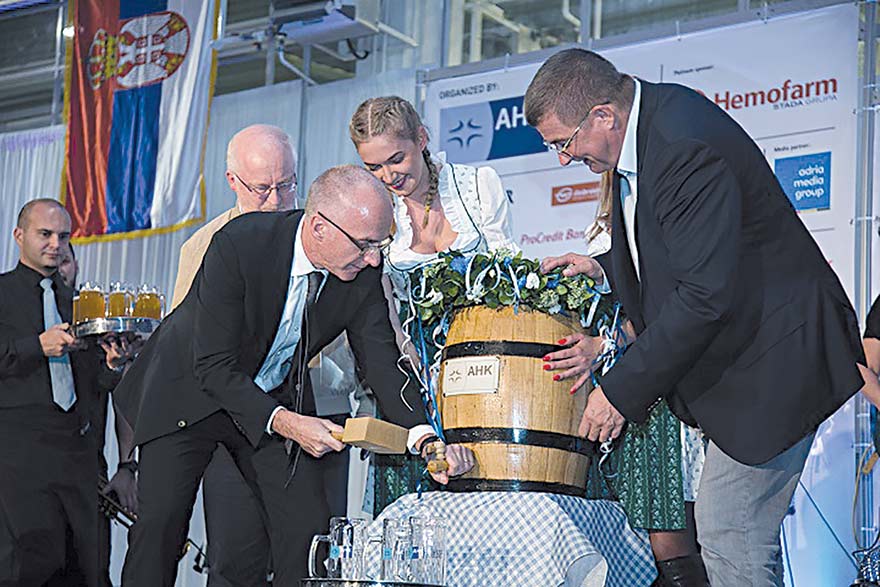 The opening the awarding of plaques for the second time: the plaque for the best vision was presented to civil society educational organisation Belgrade Open School, while the plaque for the best social engagement was presented to Stari grad 50+, an organisation engaged in promoting the safe, active and healthy lives of people in their later years.

√ 60 two-hour events over the course of one weekend

√ 60 plus reasons to come as a citizen and attend the only multi congress in Serbia! 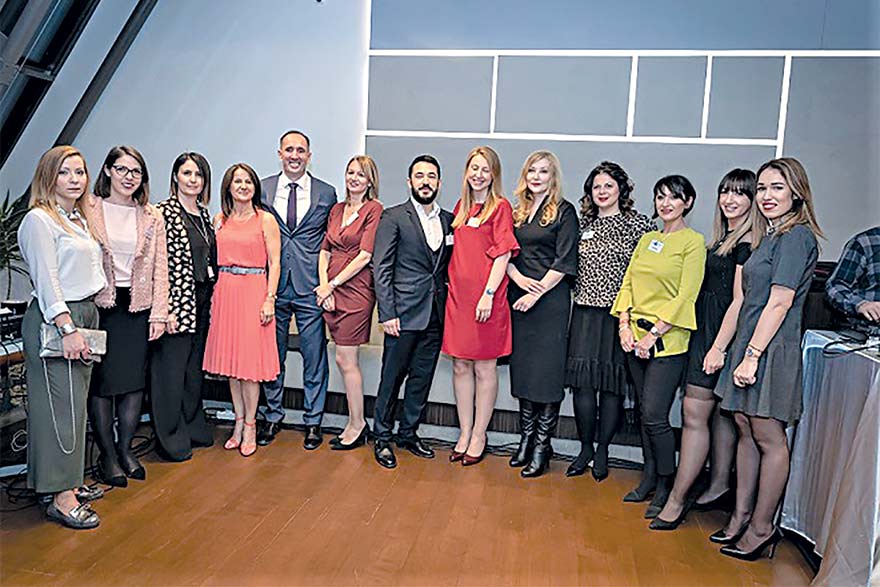