The Passenger is Our Boss

Turkish Airlines listens to the demands of the market, seeking to find solutions for the increasing needs of customers. This approach, which has earned this airline global recognition and financial success, has also proved to be a successful formula in Serbia, both in terms of passenger and cargo business

In the space of a decade Turkish Airlines nearly tripled its number of destinations and more than tripled the size of its fleet. The company’s target for 2023 is to expand its fleet to more than 500 aircraft, extend the number of destinations to more than 350 and transport more than 120 million passengers, says Mehmet Alagöz, General Manager for Turkish Airlines in Belgrade, in this interview for CorD. This year sees the company celebrate its 10th anniversary in Belgrade, which is marked by the further expansion of its services.

This year has seen Turkish Airlines declared “Europe’s Best Airline” for the sixth consecutive year in the 2016 Skytrax World Airlines Awards. What criteria had the greatest impact on you receiving such high recognition?

Turkish Airlines has been chosen as “Europe’s Best Airline” for the sixth consecutive year in the 2016 Skytrax World Airlines Awards. Skytrax is the most respected global airline passenger survey organisation in the industry, described as “the Oscars of the aviation industry”.

Our boss is the passenger. We listen to people and their needs and work day by day to improve the service, because the satisfaction of our passengers is the most important thing for us. These awards show that we invest in our services from year to year, and confirm that our passengers recognise our efforts to provide them with the best possible service, because it is passengers who choose the winners of these prestigious awards. So, we continue working for them and we are continuing our strategy regarding service improvement.

Turkish Airlines flies to more countries than any other airline in the world. The broad flight network of Turkish Airlines currently consists of 292 destinations in 117 countries worldwide. We fly to 111 airports in Europe, 49 in Africa, 35 in the Middle East, 34 in the Far East, 11 in North America and four in South America.

Turkish Airlines began its journey in 1933 with a fleet of only five aircraft. Now Turkish Airlines’ fleet consists of 334 aircraft: 86 wide body, 237 narrow body and 11 cargo aircrafts. We have one of the youngest fleets in Europe, and with upcoming aircraft orders we will further reduce the age of the fleet, while continuously upgrading quality of service.

Turkish Airlines has been chosen as “Europe’s Best Airline” for the sixth consecutive year in the 2016 Skytrax World Airlines Awards. This award is recognised as “the Oscars of the aviation industry.”

I’m very proud of the fact that in the space of a decade Turkish Airlines has nearly tripled its number of destinations, from 103 to 292, and more than tripled its fleet, from 100 to 334 aircraft.

Our target for the year 2023 is to expand our fleet to more than 500 aircraft, extend the number of destinations to more than 350 and transport more than 120 million passengers.

All analyses indicate that a great expansion of air transport is yet to come. What are Turkish Airlines’ plans and projections when it comes to the division of the world’s aviation market?

The new vision of Turkish Airlines, adopted for the year 2023, is still in progress, and despite the globally challenging effects of recent economic difficulties, this decade of investment is now yielding positive results, in terms of both passenger numbers and profitability. 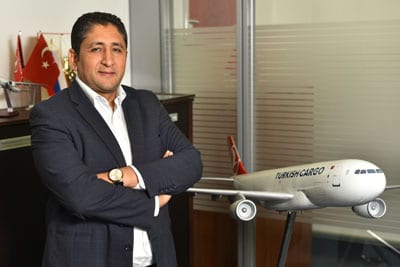 We have established and continuing to expand the world’s most comprehensive route network.

During this year we have a share of approximately two per cent of the world air market share, while we aim to take a bigger share. As long as we have continuously better service, more destinations, while we still cutting costs, we will continue to grow.

Istanbul is the hub of Turkish Airlines. How is work progressing on construction of the third Istanbul airport, which is set to have an annual capacity of 200 million passengers?

The construction of Istanbul Grand Airport (IGA), the first phase of which is planned to be active in the very near future, is a milestone not only for Turkish Airlines or Turkish Civil Aviation, but for the entire global aviation industry, since the completed IGA will be the biggest airport in the world. Upon the termination of IGA, Turkish Airlines plans to move all of its flights from Istanbul Ataturk Airport to IGA within a week.

IGA, which has created tremendous interest in the world aviation community, will enable us to drive the key role played in the global aviation industry.

What are the key benefits for passengers travelling from/to Serbia?

This year we celebrated our 10th anniversary in Belgrade. Turkish Airlines launched regular Istanbul-Belgrade flights in 2006, with three weekly flights. We now have two flights per day – morning and evening flights – which provides our passengers, when they arrive to Belgrade or when they go to Istanbul , full day in both cities.

As the Turkish Airlines Belgrade office, we strongly believe in the significance of incoming tourism for Serbia. We invite tour operators to Belgrade and other parts of Serbia, striving to show them different historic sites in the region and compelling them to organise group tours here. We also organise press trips, which means we invite journalists from Turkey and elsewhere and show them the cultural and historic sites of Serbia, and in this way we also support the tour operators to sell tours to Serbia.

Turkish Cargo is an important sub-brand of Turkish Airlines. As one of the fastest growing air cargo companies, Turkish Cargo provides the most efficient cargo transport to the leading production and commercial centres all over the world, with 334 Turkish Airlines aircraft and its network, consisting of 117 countries and 292 destinations. These numbers include 59 freighter destinations operated by 11 freighter aircraft.

Turkish Airlines contributes to the export of Serbian products to 117 countries and 292 destinations worldwide. Turkish Cargo operates to two destinations in the Balkan region, both of which are in Serbia

We listen to market demands and find solutions for the increasing needs of the market, as we wish to be a stable partner to the markets where we operate. The launch of the Niš line is our response to growing cargo transport demand in this region.

With this business move, Turkish Airlines contributes to the export of Serbian products to 117 countries and 292 destinations worldwide. Turkish Cargo operates to two destinations in the Balkan region, both of which are in Serbia.

I believe that many business sectors will feel a positive effect from the launch of this line and that increased exports will provide a greater chance for Serbian products to access international destinations.

Turkish Airlines is the sponsor of both the football and basketball champions’ league in Europe. How has this cooperation with sport functioned to date?

Turkish Airlines has endorsed sport all over the world for many years. We firmly believe in its ability to unite people from different nations and cultures on the playing field.
At the beginning of 2010, Euroleague Basketball and Turkish Airlines set up a revolutionary joint venture for 10 years. In 2017 the Turkish Airlines EuroLeague Final Four will be held in Istanbul. I know that Istanbul brings luck to Serbian basketball teams, because Partizan won the Euroleague championship when it was held in Istanbul. This time I hope that Red Star will play in the EuroLeague Final Four and win the championship.

The partnership with UEFA’s EURO 2016 was a great opportunity to celebrate the very best of European football with fans from all over the world. Turkish Airlines is proud to be able to fly fans around the world to support their favourite teams and players. Football has the power to unite people from all different nationalities and EURO 2016 was the ideal tournament to celebrate this.

Through its sponsorship of various sporting competitions, Turkish Airlines aims to connect cultures by bridging teams, cities and people from all around the world.

Healthy Tourism Certification program was prepared under the leadership of the Turkish Ministry of Culture and Tourism, with the contributions of the Ministries of...
Read more

Turkey is committed to strengthening international cooperation in combating this global threat. We closely follow and support the plans announced by the international organizations,...
Read more