It was two decades ago that Mark Harrison abandoned his comfort zone to become the first English Solicitor to set up an English Law Firm in Serbia and Montenegro. That was a very brave step, but Harrison has no regrets. Today, 20 years on, the Harrisons law office is celebrating a great anniversary

I keep stressing that it is the people, loyalty, team effort and atmosphere that make up our law firm. We are still the only English Law Firm in Serbia and Montenegro. With the right people, the right approach and their talent, we have enjoyed and participated in numerous headline deals, says Mark Harrison himself.

It was over two decades ago that you decided to open an English law firm in Serbia. Why?

I thought that might be your first question – everyone asks me ‘why Belgrade?’ The answer is simple: fate, in which I am a great believer. I had no connections to the then Yugoslavia. I visited as a child in 1973 and then my first time in Belgrade was 1976. Little did I know that, 22 years later, I would be moving there to live.

It all arose in 1983, when I was a lawyer at Linklaters, a “Magic Circle” firm in London.

One of their clients was Beogradska Banka and they agreed a lawyer from Belgrade could be seconded to the London Office for six months to see how an English law firm works. I was working late one night and saw this guy in a nearby room. Being a Yorkshireman, I invited him out for a drink. The next night I was at Tottenham Hotspur football ground with a group of Yugoslavs cheering on Hajduk Split from Croatia!

The Belgrade lawyer knew all the top Yugoslav businessmen working in London, basically for the daughter companies of their mother companies in Belgrade, and I gradually – over five or six years – became the trusted lawyer of, say, two out of every three large Yugoslav companies in London. I was then invited to Belgrade to meet their big bosses, travelling with JAT from London via Zagreb. They were the golden years of 1988 and 1989.

I had then become Head of Central and Eastern Europe for a large firm, Eversheds, and convinced them to open an office in Belgrade in 1991. It was bad timing. In June of 1991 the troubles started in Slovenia and by May 1992 sanctions were in place, and weren’t lifted until late 1995.

With the greatest of respect to most UK law firms, they turned their back on Yugoslavia (Serbia & Montenegro), but I convinced my fellow partners that we had a duty to help Yugoslavia with legal measures wherever possible. So, I led actions in the UK Courts, EU and U.S. to do what I could legally. My best feeling was when I called the Bank of England as defence witnesses for Aviogenex (who had four aeroplanes) to stop a Danish Finance House taking the planes from them. We won!

Now, like anyone, I don’t forget my friends who help in times of trouble, and so, in 1996, Serbia remembered me and the British Foreign and Commonwealth Office asked me to re-strengthen trade and business between the rump Yugoslavia and England. The best part was that I was the host on the “one night off” that visitors would get when visiting London, so I used to book a private room at a famous restaurant and announce “everything is now off the record”, and we partied.

I then started leading deals in the region. The sale of the Pivara Skopje brewery to Heineken/Coca-Cola, followed by the sale of Nikšić Brewery in Montenegro to Interbrew – a Yorkshireman knows his beer.

This made me consider whether to stay in a big law firm, where I was one of 300 partners, or to work for myself. To abandon the comfort zone? Why not become the first English Solicitor to set up an English law firm in Serbia and Montenegro? So, I sold up in England, moved out for good in February 1998, rented an office in Vračar above “The Bread of Life” charity and started looking for a secretary. The rest, as they say, is history. 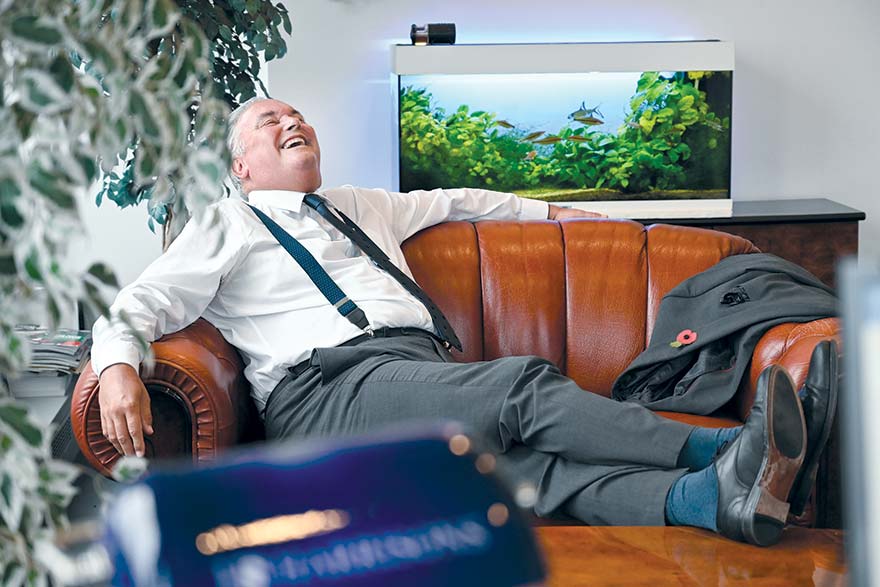 The dark side of the story. Sanctions again. Ordinary Serbian people were collateral damage; air strikes lasted from 24th March to 10th June 1999. It was awful. And it didn’t get rid of Milošević. He stayed in power for nearly another 16 months. So, we developed our Montenegrin practise. A beautiful place to work after spending years commuting for an hour to work in London. It is a perverse feeling flying into Tivat Airport by the sea in a suit to do work! It wasn’t easy for us. Foreigners were treated with suspicion and followed. There were no British or U.S. embassies. Things got worse in the summer of 2000, but finally came the great Revolution Day of 5th October 2000. After tear gas, we walked all night from Republic Square to Slavia Square and back. The next morning I knew that the Firm was ready to take off!

2001 onwards…and so, we did. The only foreign firm in Serbia. We had been there through thick and thin. No other foreign firm had. The early bird catches the worm.

Zoran Đinđić came to power – he was a really nice guy. And he formed a good government. Privatisation was the order of the day and we worked flat out.

I like Serbia, I like Montenegro, I love the warmth of their people. This area has been my home for over a third of my life

We hired more and more people. Danijela, my office manager, has now been with me for 20 years. Goran Martinović, one of the best lawyers in the country, who I’ve known for over 28 years. Jelena Asanin, a top employment lawyer – 18 years. Veljko Veljasević – 17 years. Ines Matijević-Papulin, an outstanding banking and finance lawyer – 17 years. Jovan Ćirković, a brilliant talent – 12 years. Jelena Sandić, our finance manager – 13 years. Lidija Labudović, a tough litigator – 10 years.

I keep stressing that it is the people who make our law firm. On 2nd December 2019 we officially celebrate 20 years, and it is the loyalty, team effort and atmosphere of our firm that makes us so different. We are still the only English law firm in Serbia and Montenegro. Our client list is our ‘Badge’.

We pride ourselves on our compliance with the strict requirements of the Solicitors Regulation Authority in England: Anti- Money Laundering Rules, Know your Client, Confidentiality, Conflict of Interest, Integrity, Honesty. We are always looking to improve and enter new markets, like we did with the UAE over eight years ago. Companies from the UAE are now the 2nd biggest owners of agricultural land in Serbia.

We love helping IT start-up companies. They are the future life-blood of Serbia; young entrepreneurs with bright ideas who need legal guidance to stand on their feet. And it’s great to see.

I love my “little baby” Porto Montenegro, but most of all I like living in Belgrade. Serbs and Montenegrins are like Yorkshire folk: stubborn and proud of their heritage!! Good luck to them!