The Economy Relies on Us

The University of Belgrade Faculty of Mechanical Engineering is the oldest and largest higher education and scientific institution in our country in the field of mechanical engineering. From day one it has also been the base of the development of mechanical science and industry in Serbia, and that is especially so today, when conditions for scientific research work are better than ever before

Speaking to CorD about improving links between the college and the economy, the faculty’s innovation centre, the application of new technologies, new study programmes, the increasingly important role of students in innovating the curriculum, the procurement of modern equipment, awards and many other projects is Aleksandar Sedmak Ph.D.

What kind of role is played by the Innovation Centre of the Faculty of Mechanical Engineering?

– The main role of the Innovation Centre is to transfer technology and improve the college’s links with the economy. The carriers of these activities are Ph.D. students who are simultaneously also employees of the Innovation Centre through projects of the Ministry of Education, Science and Technological Development. A significant number of these young researchers participate in the teaching process, within the scope of departments in which they are pursuing their doctorates, thus enabling them to pass on newly acquired knowledge to students. This is especially true for master’s students, with remarkable cooperation in the preparation of master’s works.

o illustrate, I would like to cite some examples, whilst noting that this kind of collaboration in teaching innovation exists in all departments. The first example would be the demonstration and application of new technologies in the field of advanced manufacturing, which was realised thanks to the international NATO SPS (Science for Peace and Security) project, within the scope of which 3D printers and a modern material testing machine were provided. The second example is the measurement of deformations by a stereo-metric device (obtained via a competition of the Ministry of Education, Science and Technological Development), which helped in the completion of a large number of master’s works. Finally, ABAQUS, the strongest commercial software for simulating and solving complex engineering problems, which was also purchased with funds from the Ministry of Education, Science and Technological Development, is regularly used in this exceptional collaboration that the college has with its daughter firm.

Which innovations in teaching have emerged from scientific research work?

-Based on many years of research, to mention only biomedical engineering, mechatronics and the application of information and communication technologies (ICT), not only is teaching significantly innovated, but new modules and departments have also been formed, often following a multidisciplinary trend that is increasingly present in the world’s leading universities.

In the field of ICT, we can boast of awardwinning master’s work, or a tractor platform for the spectrometric surveying of arable crops, equipped with sensors and tested in work on surveying corn.

We would emphasise in particular a new module in Master’s Studies, Industry 4.0, which has just started this semester, in collaboration with the Faculty of Mathematics, with the aim of preparing students to work in digitalised, automated and robotic processes. This programme was supported by the Ministry of Education, Science and Technological Development through a special competition for additional budgetary places, and apart from being based on the latest scientific research, it is extremely important due to cooperation with the economy.

Then now is the right time to ask what’s new that’s been introduced to teaching due to the needs of the economy?

– Yes, and it is the right time to continue the story of Industry 4.0, as an example of good cooperation with the economy. It should be known that 95 per cent of IT companies in Serbia struggle to find the right staff, while they offer excellent conditions of employment. As such, topics like machine learning, artificial intelligence, robotics and automation, which were until recently treated only as abstractions, have now become tangible, practical and of paramount importance. 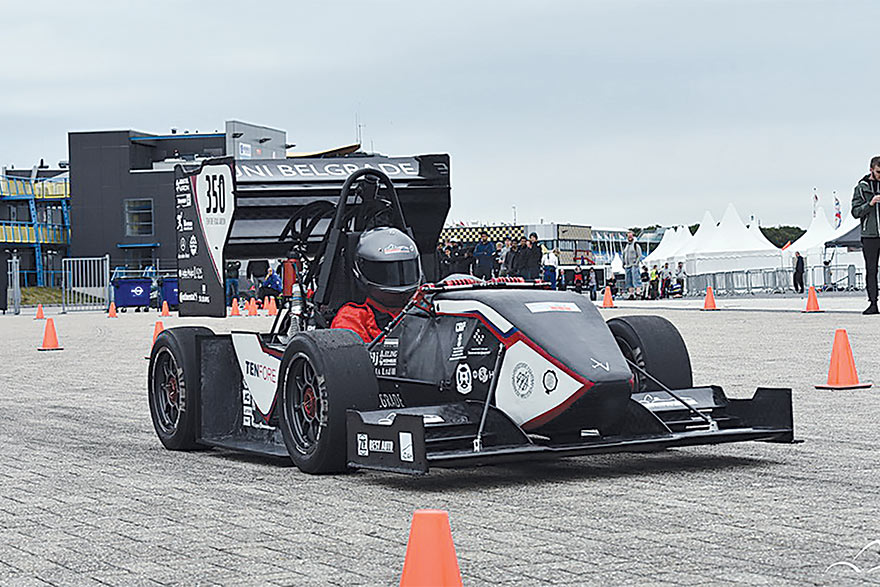 We also monitor the needs of the economy in some classical disciplines, e.g. Welding, as a leading technology in the field of metal joining. With the support of company Messer Tehnogas, the Module for Welding and Welding Construction was established more than 10 years ago as a successful response to the real needs of the economy. This collaboration not only enables students to familiarise themselves with some of the most advanced technologies, but also to do their master’s work at the facilities of Messer Tehnogas, thanks to the dual education project that has been supported by GIZ.

The aforementioned tractor platform for spectrometric surveys of arable crops is also a good example of cooperation with the economy, as are many other innovations that are applied in teaching.

What kind of role do students have in innovating the teaching process?

– Until recently the answer to this question would be “very little” or “none”, and then, a few years ago, teams of students began competing in water, on the ground and in the air!

Can you even think of a better way of learning than to design and build prototypes of race cars, so-called “formulas”, both with SUS motors and electrically-powered engines, remote control ships and drones? It would be tough to devise better practical exercises in the fields of design, materials and production, vehicles, engines, aerospace engineering, shipbuilding, automated control etc.

From humble beginnings with just a few students 10 years ago, the known renowned “Drumska strela” student team has reached several dozen members who have this year qualified for four European competitions. The Aurora missile team is working on the construction of autonomous aircraft with long ranges and minimal propulsion, while members of the “Beoavia” student team are designing and manufacturing drones. Finally, shipbuilding students have conquered the world with their cargo vessel and are now working on the design and construction of a solar ship.

As future shipbuilding engineers, members of the ‘Confluence Belgrade’ team are also working hard to build a new series of “Sava” and “Danube” ships. I should also mention that, until 10 years ago, every student initiative ended up on paper and remained forgotten somewhere, and just look where we are today.

How are the labs of the college equipped; to what extent are they modernised and how accessible are they to students?

– In recent years we’ve witnessed dramatic progress in equipping college laboratories, with the help of MPNTR, HETIP IPA programs, donations from foreign governments, as well as cooperation with industry. Millions of euros have been invested in several laboratories, and we are especially grateful to the Government of Japan, a friendly state, and are proud of the Laboratory for Steam and Gas Turbines. This topic was also important during the visit of the audit team of the German ASIIN, which checked the quality of study programmes, and insisted in particular on laboratory work and visits to a large number of our laboratories, selected at random (steam and gas turbines, cybernetics and mechatronic systems, laboratories of the departments for engines, aero-tunnel, the biomedical engineering laboratory, pumps, hydraulic turbines, gears and hydro equipment, the design and automation of food equipment).

The fact that the faculty is already accredited and that this recent check confirmed the good work at all levels also clearly testifies to our laboratories being well-equipped, including computer halls that are always accessible to students. However, it should noted that we are only half way there… the cited examples of good practice do not mean that the equipment is accessible to students always and everywhere, as there are examples of where it is not used at all. The Faculty will devote special attention to this problem in the period ahead.

Team From Faculty Of Mechanical Engineering Exhibits Aircraft In Munich

The Beoavia team of master students at the Faculty of Mechanical Engineering in Belgrade will present their Phoenix aircraft at the Air Cargo Challenge...
Read more

Radivoje Mitrović Ph.D., Dean Of The Faculty Of Mechanical Engineering, University Of Belgrade

Cradle Of Engineers Of The Future

The Faculty of Mechanical Engineering at the University of Belgrade has improved the quality and attractiveness of its study programmes over recent years, adapting...
Read more

Transferring Knowledge Is the Most Responsible Job

More than 600 experts have been working for 10 months already on a new strategy for education and science until 2030. Although it is...
Read more

Belgrade Metropolitan University assisted in preparation for the Law on Dual Study Models that was passed in 2019, as well as the necessary by-laws....
Read more