The Kremlin is also closing the alliance's...
Read more

At the pavilion of the Republic of...
Read more

5 Things You Should Know About Europe’s Energy Crisis

Europeans are bracing themselves for what could...
Read more

5 Things You Should Know About Europe’s Energy Crisis

Europeans are bracing themselves for what could be a long, cold and expensive winter. Rising energy costs are likely...
Read more

UNICEF Serbia has launched an awareness raising campaign – From My Angle - dedicated to the mental health of...
Read more
21 April 2020
Facebook
Twitter
Email

The new laboratory at the Clinic of the Clinical Centre of Serbia “Fire Eye”, with a capacity of 2,000 coronavirus tests per day, was opened

The opening of the lab was also attended by Minister of Health Zlatibor Lončar, Director of the Clinic for Infectious and Tropical Diseases Dr Goran Stevanović, Belgrade Mayor Zoran Radojičić, Ambassador of China to Serbia H.E. Chen Bo as well as Chinese experts based in Serbia.

40 microbiologists will work in the laboratory 24 hours a day.

Prime Minister Ana Brnabić said the new laboratory was a significant aid for Serbia in the fight against coronavirus, but also an important basis for further strengthening the Serbian health system. 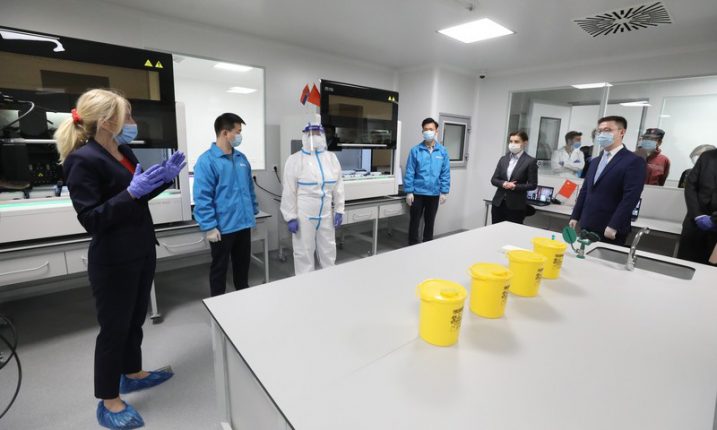 Our country is now testing between 3,000 and 3,500 people a day, and thanks to new labs in Belgrade and in Niš, which is under construction and also with the support of Chinese companies BGI and Zi Jin, those capacities to be doubled, Prime Minister Ana Brnabić said.

With these capacities, we will be among the first two countries in this part of Europe when it comes to testing, she said.

The Prime Minister said that this lab would help to launch antibodies soon to determine the resistance of the population to this virus.

According to her, after this donation, Serbia will have the best and most up-to-date laboratory in this part of Europe, after fighting the coronavirus.

The Prime Minister noted that Serbia has shown that it has a solid healthcare system, excellent scientists, researchers, engineers, but also great friends, such as China, at times of greatest need.

This is a very important day for Serbia, not only in the fight against COVID-19 but also a phenomenal basis for what we want to do in the future – full digitalisation and strengthening of our health, for it to be among the best in Europe, said PM Brnabić.

Two state-of-the-art laboratories, donated by China to Serbia to assist in the fight against coronavirus, were shipped from the country a few days ago.

The second lab, which will be installed in Niš, will be able to perform 1,000 tests a day.

RSD 2.2bn For Second Cycle Of Programme “My First Salary”

Prime Minister Ana Brnabic invited private companies and employers in Serbia to apply for the second cycle of the "My First Salary" programme, for...
Read more
Cord MagazineLeaders Meeting Point