Today, we face the global outbreak of...
Read more

Martin Knapp, Managing Board Member Of The German-Serbian Chamber Of Commerce, AHK

After the great success of the German ‘Initiative for Finding Suppliers in the Western Balkans’, AHK is now focused on finding a way to create ‘regional value chains’, creating cooperation between companies across the entire region. Serbian companies selected as suppliers are among the best in the country, able to supply the German market with everything it needs in their line of business

We spoke with Martin Knapp, Managing Board Member of AHK Serbia, about the importance of different country rankings for attracting investors, disputes regarding the dual education system in Serbian society and the future plans of AHK to bring together German buyers and Serbian suppliers.

The traditional survey of German companies on Eastern European countries as economic locations saw Serbia this year ranked 11th among a total of 19 countries. What should Serbia prioritise in order to advance to a better position on this list?

– Most respondents do not know Serbia well enough to make a real assessment. Those who really know Serbia do appreciate it as a location for investment. I would like to recall the fact that each year the vast majority of these people say that they would invest in Serbia again if they had to make the decision again.

– Please, no more working groups! In the German Chambers, we don’t have a country ranking system based on specific criteria like the Doing Business Index of the World Bank. 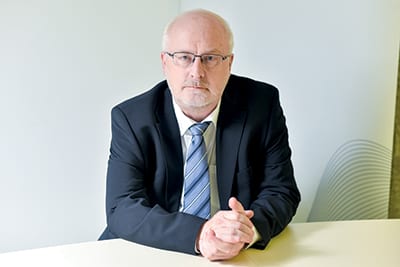 That system has so far tempted the government of a neighbouring country to focus its reforms only on the nine criteria of this particular index, leaving almost everything else in the country as it was.

This may be a proper way to improve the position of your country in the Doing Business index, but investors could be disappointed in the end. For us, it is more a question of principles, such as the famous Rule of Law, which cannot be measured in figures. Nevertheless, behind the rule of law, you can find an attitude of mind, which must prevail in the entire judicial system, as well as in the administration of a country. Here every single player is asked, not even so much the legislator.

Considering that German companies already operating in Serbia are better able to assess the business environment than that only considering possibly investing, could it be said that there are some prejudices among potential investors and, if so, how can they be assuaged?

– We have investors with rich experience in investing in many countries all over the world. This group is quite well-managed, particularly because the situation is quite similar in many countries that are taking part in the worldwide competition for industrial investment, especially when it comes to the kind of investment that is based mainly on relatively low labour costs.

On the other hand, we have those investors who are venturing abroad for the first time, due to costs in Germany being too high. This group needs much more advice from our side, but it is our job to make sure that there are no surprises for these companies.

Where do you see the greatest shift in improving the business climate that was achieved thanks to the work of the German-Serbian Chamber of Commerce and German development agencies with the Serbian government?

– On the part of the business community, many institutions are concerned with how the environment can be improved for investors. The Chamber of Commerce & Industry of Serbia (Privredna Komora Srbije – PKS) has, by law, the privilege of speaking on behalf of the entire economy.

The government must even consult the chamber before taking any decision relevant to the economy. For this reason, we are cooperating very closely with the PKS. The field where German input is most visible is dual vocational training. This is not surprising, especially since the system of dual VET originated in German-speaking countries.

You have amassed three years of experience organising three events of the “German Initiative for Finding Suppliers in the Region of the Western Balkans”. How would you rate the results of this project?

– Quite excellent. This project is among the best things we’ve ever done. We find strong and long-term buyers for medium-sized and smaller Serbian companies, which are among the country’s most advanced enterprises in technological terms.

The same situation occurs in neighbouring countries. We are now looking to create so-called ‘regional value chains’, compelling companies in the entire region to cooperate to produce more added value in the Western Balkan region.

Do Serbian enterprises have sufficient capacities to respond to the needs of the German market, considering their production capacities?

– This cannot be answered in a general way. There are companies able to supply the German market with everything that it needs in their line of business. Other companies first need to expand their capacities.

In the field of consumer goods, it is sometimes difficult to cooperate with large supermarket and consumer market chains, because the German market is very large, with over 80 million inhabitants, and therefore requires huge quantities.

AHK firmly supports Serbia’s EU accession. This is the case for the purchasing initiative, as well as for vocational training or for ‘Serbian Visions’, our large event with 60 organisations, each of which has a vision for a better future in Serbia

The recent arrival of IKEA has caused concern among manufacturers from the domestic wood industry, due to expected competition that will disturb the Serbian market in this sector. Negotiations are underway with some German companies that could elicit similar reactions in other sectors. In your opinion, how can we reconcile the need for large investors with the negative viewpoint of local producers?

– If you look at the countries where companies like IKEA produce their goods, you can see that these are countries with economies that are very similar to Serbia’s. To this extent, the presence of such chains in the country is an opportunity for manufacturers rather than a threat.

Dual education has been met with contradictory comments in Serbian society, but among critics, it is primarily seen as a model for producing cheap labour for foreign investors. How would you react to such an assessment?

– Only people who don’t really know the system can see it that way. Only unskilled and uneducated workers are really cheap. The more educated a person is, the higher their potential earnings. And what would the alternative to dual vocational training be?

The traditional vocational training system is in no way sufficient to attract investors to the country who can introduce more technologically sophisticated production processes. Any potential investor who wants to create more ‘added value’ in Serbia first enquires about the availability of skilled workers.

You are among the most familiar with the regional and Serbian markets. What is the Serbian market still lacking when it comes to approaching European standards?

-This is one more question that cannot be answered in a general way. There are some companies that meet all modern standards, but there should be more of them. In order to create greater capacities, investment is required – and it doesn’t matter whether it’s domestic or foreign. A very important topic is the availability of a skilled labour force, as I already mentioned. Another question is the certification of standards. Today it is not enough to meet standards, you also need a lot of different certificates, most of which are quite expensive.

Germany firmly supports Serbia’s EU accession. Where is the place of AHK in that process?

– Whatever we do is aimed towards European integration. This is the case for the purchasing initiative, as well as for vocational training or for ‘Serbian Visions’, our large event with 60 organisations, each of which has a vision for a better future in Serbia, partly related to the economy and partly to society.

This is a kind of festival of civil society that we will organise again for the third time this November. Every one of the 60 partner organisations has the opportunity to present its activities to the ‘Serbian Visions’ community. I would ask you: please notice that we are talking about Serbian visions, not German visions for Serbia…