In the domain of air transport, the Ministry of Construction, Transport and Infrastructure deals primarily with developing and advancing the provision of aviation services, air transport, air traffic management and the receiving and dispatching of aircraft, passengers, goods and post in international air traffic.

Air traffic in Serbia has achieved the highest level of harmonisation with EU regulations and is regulated by the Law on Air Transport, the Law on Airport Management and the Law on accident investigations for aviation, waterborne transport and railways, as well as more than 100 statutes and guidelines.

At Serbia’s key airports, Nikola Tesla in Belgrade and Constantine the Great in Niš, the state of infrastructure and equipment was inadequate at the beginning of 2014. There was a lack of capacity at Nikola Tesla, while Niš airport lacked the elementary conditions to receive and dispatch aircraft in conditions of reduced visibility.

On the one hand, the volume of traffic at the primary Belgrade airport had reached almost the maximum projected capacity by 2014, primarily in terms of terminal infrastructure, while – on the other hand – a strong process of financial consolidation had begun in Serbia. One of the possible solutions for the further development of air traffic infrastructure was the issuing of a concession for Nikola Tesla Airport. On the basis of a public call for the selection of a concessionaire, the development and management of Serbia’s busiest airport, Nikola Tesla Airport Belgrade, was entrusted to French company Vinci Airports Serbia for a 25-year period on 22nd December 2018. The French partner accepted an obligation to pay 501 million euros in advance, to make investments amounting to 732 million euros in construction and development, and to pay an annual concession fee for the 25-year period amounting to around 250 million euros.

The accelerated development of the Niš airport was launched in July 2014, when the dominant services, i.e. low-cost traffic and the equipment necessary for that purpose, were determined. Within the scope of the modernisation of Niš airport, among other things, the capacity of check-in counters was expanded, new equipment was procured and new procedures were introduced, all in order to raise the level for the safe arrival of aircraft under conditions of reduced visibility. State investments in Niš airport resulted in a more than 250-fold increase in the number of passengers – from 1,335 in 2014 to 351,581 passengers in 2018.

Nikola Tesla Airport is expected to service more than six million passengers in 2019, while Constantine the Great Airport will welcome between 380,000 and 400,000 passengers

Given the strategic importance of the Niš airport, as the second largest international airport in Serbia, and the future need for it to function under a 24/7 regime, as well as the inability of the City of Niš to finance operational work, capital costs and the obligations it took on with the transferring of this real estate from the Republic of Serbia to the City itself (including Constantine the Great Airport), the Government of Serbia accepted the decision of the Assembly of the City of Niš to return ownership of the complex of Niš’s Constantine the Great Airport to the state. The same decision of the City Assembly also saw the founding rights of Public Company ‘Aerodrom Niš’ transferred to the Republic of Serbia. 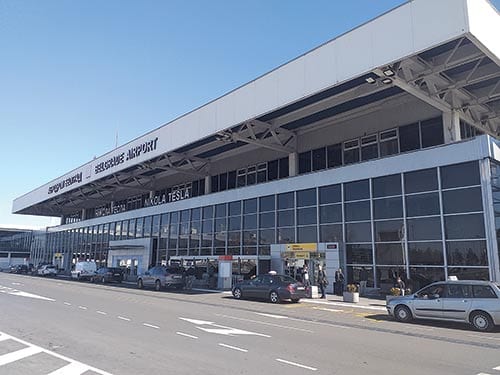 From the moment of its takeover until the end of 2021, total investment of around 22 million euros is planned. These investments will include the construction of a new air traffic control tower worth 5.5 million euros, around 3 to 3.5 million euros for the passenger terminal and operating costs, as well as nine million euros for the operational work of the airport company, air traffic control, border police and customs administration, the procurement of special vehicles and the procurement of other equipment and works. With the state having taken on the obligation to invest, the City of Niš will be unburdened of annual costs totalling at least three million euros, which is about five per cent of the City’s budget. Commercial conditions at the airport have not changed, while all employees who were employed prior to the return of the airport to state ownership remain in the same employment relations.

On the basis of the Law on Airport Management and the Law on Air Transport, the Government of Serbia is working on a functional model for the development and management of airports throughout the entire territory of Serbia. To this end, it has established company “Aerodromi Srbije” [Airports of Serbia] as a general airport operator, which is tasked with implementing the National Programme for the Development of Airports.

There are currently 34 registered airports in Serbia, though there are significantly more over the entire territory of the country. The Government of Serbia is exerting maximum efforts in oder to register the 35th airport, the newly-established military-civil airport. This relates to the country’s third international airport, Morava Airport in the vicinity of Kraljevo, the operator of which will be Aerodromi Srbije, which has been formally made the user and manager of the civilian part of the airport complex.

During the course of 2019, plans include investing at least eight million euros in equipping this airport and ultimately creating objective conditions to launch traffic. The plan is for the airport to be certified and ready to receive the first planes by 28th June 2019.

The management of the airspace above the territory of Serbia, the eastern part of Bosnia-Herzegovina and Montenegro with its coast is performed by the Serbia and Montenegro Air Traffic Services Agency – SMATSA, which has at its disposal a developed radar network, high-quality ancillary equipment, infrastructure and highly-trained personnel. SMATSA plans to launch the construction of an annex to the flight control centre and control tower at Belgrade Nikola Tesla Airport. Construction began in late 2018 and will continue until year’s end 2020. These construction works are valued at 16 million euros.

Alongside planned investments, another reason for optimism when it comes to the further development of air traffic in Serbia is provided by the constant increase in the number of passengers, which totalled almost six million over the course of 2018, or almost 70% more than in 2013. Nikola Tesla Airport is expected to service more than six million passengers in 2019, while Constantine the Great Airport will welcome – with growth of 10 per cent – between 380,000 and 400,000 passengers. It is also estimated that Kraljevo’s Morava Airport could have between 10,000 and 15,000 passengers in its first year of operations.