The development of eGovernment has become an important topic, while the previous two years were very important for completely rounding off the regulatory framework

The NALED Alliance for eGovernment was founded in July 2016, when it brought together 20 companies from the ICT sector with the aim of improving the regulatory framework for the development of eGovernment and eBusiness, cutting costs and red tape for citizens and businesses, as well as strengthening the capacity, efficiency and transparency of public administration.

There are today 62 members, including companies from finances, trade and other sectors, as well as local self-government and academic institutions. The work platform of the Alliance is the Strategic Framework for the Development of eGovernment, which NALED submitted to the Government of Serbia as a recommendation in June 2016.

What would you single out as the most important achievements of the Alliance’s work, and what are the priority activities you’re planning in the coming period?

– The development of eGovernment has become an important topic and the previous two years were very important for rounding off the regulatory framework. Our recommendation was adopted to establish the Office of IT and eGovernment, as a body to coordinate the work of the competent institutions, and the Coordination Council for eGovernment of the Government of Serbia has been formed.

We’ve also received two reformist laws – the Law on eGovernment and the Law on eBusiness – and through participation in the drafting we managed to have all the recommendations of the Alliance included in the provisions. With the support of the Good Governance Fund of the UK Government, NALED prepared 12 bylaws for the Law on e-Business that are crucial to the development of eServices and our initiative saw has abolishing of the obligation for the economy to use stamps/seals as of October 2018, which is of great significance for encouraging the faster development of eBusiness.

Among the great works undertaken in this area, I would also highlight our participation in the drafting of the eGovernment development programme for the 2019-2021 period. We are actively involved and want to this year successfully complete the drafting of an information security law, archive material law, regulations on office-based operations and categories of registry materials, the establishing of an eRegistration, a state eArchive and a new system for the management of documents.

You once compared the development of eGovernment with a moving target. How successful has Serbia’s ‘aim’ been to date?

– The development of eGovernment is a process that can never be completed due to the advancement of technology. 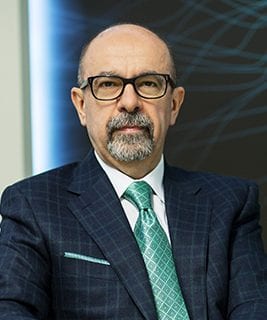 We are now in the phase of establishing services that imply two-way communication between the state and citizens, but primarily for the purpose of obtaining documents. The most successful states today use eGovernment to engage citizens and industry in the creation of public policies.

A positive thing is that, after establishing foundations for the development of eGovernment, we can skip more steps by relying on the experiences of those countries. Likewise, it is good news that the state has dedicated considerable resources to the development of eBusiness, and we’re on track to receive a World Bank loan of $50 million, which confirms that we are ready to invest in order to keep pace with modern trends.

The previous year was marked a major milestone – the stamp was consigned to the history of the Serbian economy. When will the state also cease to use stamps?

– Official statistics show that in the first five months following the abolition of the obligation to use stamps, entrepreneurs reported 122 cases when individual officials requested a stamp after 1st October last year. If we consider that the majority of complaints arrived in the first two months, we can conclude that this situation is improving.

With insight into complaints, we’ve seen that civil servants are still concerned about the reactions of other institutions in the case that they accept a document without a stamp. For example, at banks there is concern that a court will not challenge a contract that isn’t stamped, while private companies fear that an inspection could cause them a real problem if they come across a document lacking a stamp.

This is why it’s crucial that these bodies show in practise that they’re familiar with the new legal solution and for them to be its promoters, and to advance in the next step to working with electronic documents as soon as possible.

Do you expect a law on electronic archives to be adopted soon, which would serve to reduce and simplify the maintaining and storing of the documentation of the economy and state institutions?

– We expect the adoption of a law that will enable the electronic archiving of business documentation during this year, because it is very important for the financial and administrative unburdening of the economy and state institutions. Due to the obligation to store business documentation, large firms spend more than 150,000 euros annually on the leasing of warehouses, engaging of labour and fire protection measures. This impacts in particular on companies, but also municipal administrations, that have frequent interaction with citizens and businesses or take care of the functioning of institutions. For example, the Administration for Joint Services of the Republic Bodies has 70 kilometres of archives.

NALED has sent dozens of recommendations for improving the existing draft law on archival material. The new law would not lead to a shift if, for example, it contained the provision that “businesses are obliged to maintain documentation until the archive is able to take it over”, given that we already now know that the archives have a problem fulfilling such an obligation. Experience to date shows that the majority of business documentation has no cultural-historical significance. The possibility of digitalisation and electronic storage would mean a significant reduction in the costs to the economy, while it would not reduce the basic purpose of protecting archival material, which is in the general interest.

Testing that you carried out with the Office for IT showed that local governments in Serbia need to improve the safety of citizen data. Which guidelines should they follow? Is it planned for such testing to become a regular practice?

– The Alliance for eGovernment and our members Asseco SEE, Comtrade, IBM, KPMG, SAGA, SBS and SAP, last year tested, gratis, the capacities of 10 local self-governments in terms of information security and the protection of personal data and defined recommendations that are now being implemented by the Office for IT and eGovernment, together with municipalities and cities. Testing showed that local governments are primarily vulnerable to potential internal abuses of information and that it is necessary to improve information systems, the capacities of IT staff and data management procedures. It is planned that the Office for IT, as the competent body for ensuring the security of the information systems of local governments, will secure resources for further improvement, especially in smaller municipalities. The conducting of regular testing, as well as education, is also planned.

Speaking at the Serbian-Korean Forum on eGovernment and Smart Cities, you stated that it’s essential for our local governments to follow global investment trends in smart technologies. Can Serbian cities and municipalities secure the resources for such endeavours; and does this recommendation apply to less developed communities?

– Statistics on the application of smart technologies show that up to $100 billion is invested annually in smart city solutions worldwide. Our cities and municipalities need to find ways to secure funding for such investments, because estimates suggest that investments in smart technologies bring a value four times the level of resources invested, leading to major savings and improvements in efficiency in areas such as traffic flows, environmental protection and cleanliness, and energy efficiency. It is important for cities that have the possibility for something like that to keep pace with trends that will later be followed by other local governments, in accordance with their possibilities.

The latest example of cooperation between companies and the most vulnerable local governments once again showed that NALED is able to unite its members,...
Read more

For the economy to keep turning despite the Covid-19 pandemic, institutions must try harder to find comprehensive rather than partial solutions to create better...
Read more

Dialogue Is The Best Path To Successful Reform

What has enabled us to initiate major changes is the synergy we have created by bringing together companies, local governments and civil society, ready...
Read more

Overview Of Reforms Carried Out In 2020