“Investing in infrastructure is the biggest challenge for our accelerated digital transformation. We need essential funds that cannot be allocated from the budget and, as such, EU assistance would be of exceptional importance”

Serbia is committed to participating, along with other partners in the Western Balkans, in preparations for integration into the Unified Digital Market, which will enable better connectivity and incentives for the development of the digital economy and society. Enabling the use of digital solutions and services, regardless of borders and political differences, will contribute to improving people’s quality of life, which is the main purpose of the digital transformation of the economy and society,” says State Secretary Tatjana Matić speaking in this interview for CorD, noting that it is therefore very important that representatives of the Western Balkan countries committed themselves to cooperating during the past with the signing of the Declaration on Support to the Digital Agenda for the Western Balkans.

“Alongside the Agreement on the Reduction of Roaming Prices, this also encompasses cooperation in the field of network development, digital security, the digital economy and innovation,” says Matić.

Can we expect new financing models for the region to be established to enable the joint financing of major infrastructure projects, primarily the development of broadband networks?

– Investing in infrastructure is the biggest challenge for our accelerated digital transformation. We need essential funds that cannot be allocated from the budget and, as such, EU assistance would be of exceptional importance. We have thus proposed new financing models under the scope of which the countries of the region could connect and thereby jointly fund infrastructure projects.

One of the first steps in implementing the Agenda was the signing of a letter of intent, together with Bulgaria and Greece, on the formation of the Balkan Corridor, i.e. on cooperation in the field of connected and autonomous vehicles. What does this project imply?

– For the purposes of research in the field of connected and autonomous vehicles, several corridors have been formed in the European Union that will be used to carry out tests on highways, where a special task is represented by ensuring the border crossings of self-driving vehicles. The forming of the Balkan Corridor with Greece and Bulgaria is for Serbia, as the only country in the project that isn’t an EU member, an opportunity to participate in a process that will benefit industry, society and the environment, but also represents confirmation that we can realise benefits beyond the EU, through regional connectivity. This agreement also provides great recognition to our experts, researchers and operators, because this is a technically very complex project.

The second digital summit in Belgrade should now lead to us signing the long-awaited agreement on mobile roaming tariffs for the six countries of the Western Balkans. What is specific about it? Can we additionally hope this is the first step towards new rules for roaming tariffs with EU members?

– The agreement within the scope of the Digital Agenda for the Western Balkans obliges the signatory countries not to exceed the maximum established retail and wholesale prices of roaming services. 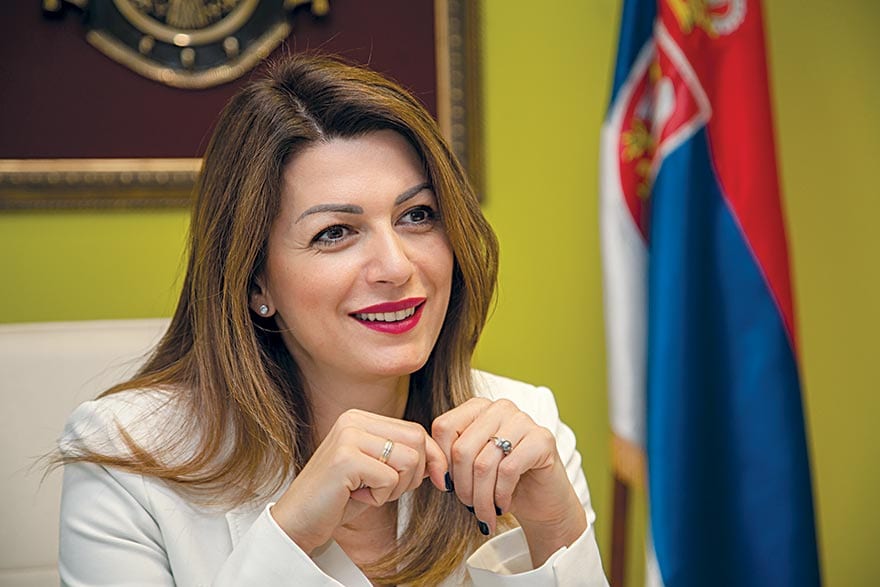 For example, during the transition period, any addition applied for regulating roaming services will not exceed 0.05 euros per minute, 0.02 euros per SMS and 0.025 euro per megabyte of information sent. This transitional regime will start being enforced on 1st July 2019 and will last until 30th June 2021. By 1st July 2021 at the latest, the maximum retail price for roaming in the Western Balkans will be brought to a pricing level aligned with the rules of “roaming like at home”, which are applied in the European Union. We hope the Agreement will be signed at the upcoming Digital Summit in Belgrade, provided political circumstances allow that – given that Belgrade has exerted great efforts for this agreement to be reached. However, the place and time of its signing are not as important as actual implementation, given that reducing roaming costs in the region is a step towards establishing such an agreement with the EU.

Digital security is also among the priorities of regional cooperation. Can we expect the announced establishment of regional training centres for information security to happen soon?

– It was agreed at a meeting of representatives of Western Balkans countries in Skopje this February to establish regional training centres for information security, in accordance with the available capacities of the countries.

In Serbia, the Centre for the Protection of Privacy and Information Security in the Digital Space has been established within the Serbian Academy of Sciences and Arts, SANU, and one of our initiatives is to work within the scope of that centre to exchange experiences between the countries of the region in the field of products and new technologies.

Serbia also gained its National Contact Center for the Safety of Children on the Internet two years ago, which is the first and to date only institutional mechanism in the region dealing with preventing, and responding to, the endangering children in the digital environment. How are the results of this institution’s work?

– In two years of operations, the National Contact Centre has received more than 7,300 calls and online applications and inquiries. We are still being contacted by a slightly higher percentage of adults, at about 70%, but children also call, which is significant in that it shows that they themselves see a need to familiarise themselves with online risks.

The number of regular e-commerce users rose to 30.9% in 2018, but the fact that 45.4% of internet users have never purchased or ordered goods or services online is unsatisfactory

The Centre has established more than 1,420 cases, 158 of which are cases of more serious online endangering of minors, such as cyber-bullying, recruiting, pornography, abuse of social networking profiles, blackmail and threats, dangerous and fake games and addictions. The Centre also conducts education courses throughout Serbia, with 316 lectures have been held to date in 71 towns and cities.

What are expectations like when it comes to the development of e-commerce in our country, given that the Serbian market is still rather suspicious of such forms of trading?

– Although e-commerce in Serbia has been recording growth in recent years, it is still insufficiently developed. Considering the constant increase in the use of information technologies, the potential for the greater involvement of users in this kind of trade is evident. The number of regular e-commerce users rose to 30.9% in 2018, but the fact that 45.4% of internet users have never purchased or ordered goods or services online is unsatisfactory. Moreover, the majority of micro, small and mediumsized enterprises in Serbia are still not expanding their operations to the online market. With the aim of encouraging the faster development of ecommerce, we are preparing an Action Plan for the Promotion of Electronic Commerce for the period from 2019 to 2020, while in 2019 there are plans to introduce a new Law on Trade and to amend the Law on Electronic Commerce and the Consumer Protection Act.

Are negotiations with company Alibaba continuing and when can we expect more information regarding these developments?

– The Ministry of Trade, Tourism and Telecommunications has signed a Trust Agreement with company Alibaba, which obliges both parties not to publicise information on the course of cooperation negotiations. Upon the completion of negotiations, we will issue a joint statement on the results and further steps to strengthen cooperation, which for now envisages the launch of the Alipay electronic payment platform on the Serbian market and the promotion of Serbia’s tourist offer on the Chinese market.

No Progress Without The Digital Agenda

Serbia has demonstrated that it’s ready for digital integration within the framework of the Digital Agenda for the Western Balkans and that it is...
Read more

Strategy For The Development Of Information Society And Security Adopted

The Government of Serbia has adopted its Strategy for the Development of the Information Society and Information Security, based on the proposal of the...
Read more

Minister of Trade, Tourism and Telecommunications and General Commissioner of Serbia at Expo 2020 Dubai Tatjana Matic opened today a presentation centre of the...
Read more

From 1 October 2021 to 31 March 2022, the Republic of Serbia, together with more than 190 countries from all over the world, will...
Read more
Cord MagazineLeaders Meeting Point