The world is changing rapidly, with globalisation and digitisation significantly increasing the pace of our lives and bringing us closer together than ever before, as well as presenting profound challenges to our self-perception, politics, the economy, security and society

The creating, keeping, communicating and consuming of information are all being digitised, turned into the universal language of computers. All types of enterprises, from small businesses to large corporations, and from non-profits to government agencies, are going through a “digital transformation,” turning digitisation into new processes, activities and transactions.

From the 1950s onwards, with a distinct jump in the 1990s due to the advent of the internet, digitisation has changed the way we work, shop, bank, travel, educate, govern, manage our health and enjoy life. The technologies of digitisation enable the conversion of traditional forms of information storage, such as paper and photographs, into the binary code (ones and zeros) of computer storage. 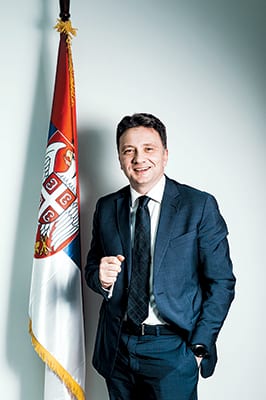 In less than half a century, the entire society and the world we knew have changed. Digital evolution has transformed the ways in which we communicate, educate ourselves or treat ourselves… It has sprung up in all spheres of society and completely changed our everyday lives.

One of the most important segments for citizens and the economy, which was digitised in the previous period, is the public administration, i.e. the state. The beginnings of this process were marked by the creation of the national eGovernment portal in 2010, which had the aim of enabling citizens and representatives of the business sector to perform their activities fully online, instead of by queuing and visiting counters, with the help of a computer and internet connection.

The portal is designed to bring users greater comfort and save them time and money, but also to increase transparency and reduce corruption and the state’s costs of printing (in the millions of dinars annually). The number of active portal users has grown steadily since its inception. Perhaps best illustrating this progressive trend is the fact that the portal had 30,000 users in 2015 and now has more than a million users.

Replacing the old health insurance card for a new one, enrolling children in preschool online, scheduling an appointment for an ID card or driver’s license, ordering copies of birth certificates and citizenship certificates, as well as registering a vehicle and changing a driver’s license are currently the most popular among a total of 811 various electronic services established by 144 state bodies.

The national eGovernment portal is today one of the main channels of communication between citizens and the state. Contributing massively to this situation has been the recent introduction of the ‘eZUP’ information system, which connected the 14 largest databases of six institutions in Serbia. Thanks to this project, employees in the state administration and local self-governments can now access citizens’ data using complex software that combines all these databases in just a few seconds and clicks

The national eGovernment portal is today one of the main channels of communication between citizens and the state. Contributing massively to this situation has been the recent introduction of the ‘eZUP’ information system, which connected the 14 largest databases of six state institutions in Serbia. Thanks to this project, employees in the state administration and local self-governments can now access citizens’ data using complex software that combines all these databases in just a few seconds and clicks.

By strengthening our knowledge and capacities in 2016, we developed a new information system – ‘Baby, welcome to the world’, which enables parents to register their children in the birth register, confirming their residence and health insurance electronically in the maternity ward – without having to visit the counters of various state institutions. From the beginning of this year, parents have been able to apply in the same way for parental allowance.

With the advancement of ePayment, we have enabled users to pay administrative fees for personal documents, registration extension or other electronic services completely online – via Master Card, Visa or Dina payment cards of all banks operating on the Serbian market. In this way, we have for the first time offered them the complete electronic service of state bodies, which wasn’t previously complete because citizens had to visit a counter in order to realise payment.

An important segment of the digitisation of public administration is the opening and publishing of state data in one central location, on the new National Open Data Portal, which started its work in mid-October last year. The European Commission predicts that the opening of data will create a market valued at 40 billion euros annually, while the total value it will bring the EU economy will reach 200 billion euros. That’s why open data is spoken of at the international level as the new oil.

IT SECTOR – THE DRIVING FORCE OF OUR ECONOMY

Alongside the state, the most important carrier of technological and digital development is the IT sector of our country. In this branch of the economy, which is currently the fastest-growing in Serbia, fewer than 3,000 companies operate and employ about 41,000 workers, with an average gross monthly salary of 150,000 dinars.

Practise has shown that one factor that could seriously slow down and limit the growth of the IT sector in Serbia is a shortage of qualified personnel. This branch of the economy is one of the few in our country with a greater supply of jobs than demand and a great shortage of experts. It is estimated that the IT market currently lacks more than 20,000 trained professionals.

The IT sector could be the change that we expect – a lever that will launch the Serbian economy and place us among the regional leaders in this industry. We have the knowledge, people and capacities, the support of the community and the state itself. It’s only up to us to be creative, curious, eager for knowhow and actively participate in the digital evolution

This led to the Office for IT and eGovernance initiating a national re-training programme in the IT sector, at the recommendation of the Council of Ministers chaired by Prime Minister Ana Brnabić and with the support of partners from the UNDP and the private sector. To date, 94 trainees have been equipped to work as junior programmers.

As many as 70 per cents of them found work or began attending professional practice in some of the largest domestic IT companies. A new retraining competition that was completed recently attracted 13,000 applicants, while training is actually being prepared for 700 applicants who pass several rounds of selection. 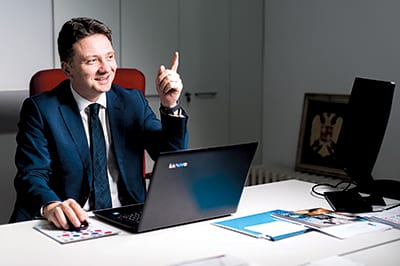 Within the framework of the Government’s initiative to increase the number of IT specialists, the capacity of technical faculties has been improved – they received permission to hire additional teaching staff, and as of this year, the number of students has increased by about 630 places or 20 per cent. Moreover, Information Technology and Computing have been introduced as a subject in primary schools, all of which are equipped with computers, while 1,750 of them have been provided with secure internet connections.

Our developers are the drivers of innovation and generators of profit for the most important domestic and foreign companies, while the World Economic Forum ranked Serbia among the best third of countries worldwide in terms of the level of technological readiness. For the first time, digital transformation has been recognised as a topic of national importance, and the carrier of this development is the state itself – which guarantees the fastest and safest possible implementation of new technologies and processes.

The IT sector could be the change that we expect – a lever that will launch the Serbian economy and place us among the regional leaders in this industry. We have the knowledge, people and capacities, the support of the community and the state itself. It’s only up to us to be creative, curious, eager for knowhow and actively participate in the digital evolution.