Marko Čadež, President of the CCIS, Chair of the Eurochambres Digitalisation Committee

We Continue to Support Digital Transformation

During the course of 2019, there will be 25 new consultants trained and certified, 175 companies will receive digital maps, with 120 of them also receiving strategies for digitalisation

Apart from the fact that it digitised all services for the economy in recent years and, with 63 digital services on its ePortal, became the leader among the region’s chambers, the CCIS is also the first to embark on the digital transformation of the economy.

The Chamber of Commerce & Industry of Serbia last year established the Centre for the Digital Transformation of the Economy. What has been done through the pilot project to date?

– Already in the first year since its foundation, with the financial support of the German Organisation for International Cooperation (GIZ) and expert assistance of the Austrian Economic Chamber (WKO), we have trained 22 digitalisation consultants and certified them successfully with WIFI – the WKO’s accredited certification body. With their help, 40 SMEs received digital road maps (expert analyses), while 20 of them also received strategies for digitalisation.

The initial step was to prepare a basic study on the state of digitalisation in the Serbian economy, which confirmed that SMEs, in particular, requires serious assistance in this process. Our response to the needs of the economy was to form the Centre for Digital Transformation, which will help companies to digitalise their operations faster and more effectively – by informing, advising and educating, proposing transformation and financing models, supporting in the implementation of digital solutions and connecting with those who possess knowledge, technology, instruments and funds.

What did the results of analysis show; which problems are our companies facing; why haven’t they progressed further on digital transformation to date, and what are the experiences of those who’ve completed your programme? 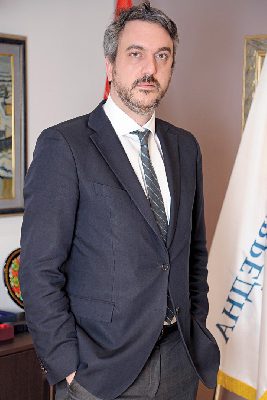 – The results of the surveying of more than 340 companies – from the metallurgy industry, agriculture and services like tourism and logistics – showed that the level of the general digitalisation of operations is low, both in Serbia and around the entire region, that our companies aren’t sufficiently familiar with everything that’s implied by digitalisation, that they lack sufficient information and know-how regarding processes and opportunities, sources of funding etc. It was shown that as many as 60% of those surveyed practically don’t do anything on their digitalisation, while the planned activities of others boil down to, for instance, procurement of basic software or creating a website. It is true that there are differences when we view the situation on the basis of a sector.

At the same time, the number that applied last year, in the first call to companies, was five times higher than planned for the first round of support, which suggests that smaller firms are also increasingly aware of the need to digitalise their operations and are interested in participating in this programme. With the help of consultants and the establishment of new business models, the majority have realised that they can increase their efficiency and competitiveness significantly, better utilise the opportunities provided by digital operations and adapt communications with customers and clients through swift technological changes.

What is implied by the Digital Transformation Support Programme for 2019; which activities are being implemented and which are planned?

– The plan is to train and certify 25 new consultants this year, a call for which was already announced in March. Our aim is for another 175 companies to get digital maps in 2019, i.e. the analysis of 120 experts and digitalisation strategies, and for 110 companies to implement technological solutions on the basis of strategy implementation.

The plan is to train and certify 25 new consultants this year, a call for which was already announced in March

Digitalising the traditional economy isn’t a challenge only for Serbia, but for the entire region. When it comes to this goal, what role is paid by the Western Balkan 6 Chamber Investment Forum (WB6 CIF), over which you preside?

– With a view to what we’re already doing in Serbia, the Chamber Investment Forum will, with the financial and expert assistance of the Austrian Development Agency (ADA) and Austrian Economic Chamber (WKO), launch the implementation of multi-year projects in the coming months that are aimed at introducing and developing dual education across the whole of the Western Balkans and furthering the digital transformation of the region’s economy.

Already during this year and next, the creation of a unique set of services for all six Western Balkan chambers is envisaged, as well as capacity building among the chambers to support the economy in these areas as efficiently as possible. When it comes to the digitalisation segment, the first phase envisages the selection, training and establishment of a network of certified consultants who will be provided to assist the economies of the region in digital transformation processes – the creation of digital maps and strategies, and the implementation of technical solutions envisaged by these documents. A valuable foundation for the creation and implementation of future activities will be provided by a study that will analyse the situation thoroughly, determining the needs of, and obstacles faced, by the SMEs of the region on the road to faster digital transformation.

What are the expected effects of digitalisation in the region?

Companies will be enabled by digital transformation to improve all segments of business through the use of modern technologies and innovations – from production, via administrative processes, to communicate with consumers on local and foreign markets. Those who digitalise their operations on time will be more efficient and competitive, they will produce more and better quality, and products of higher added value, connecting more easily with customers and engaging in global supply chains…

Serbia hosts the Second Digital Summit of the Western Balkans in early April. What significance does this gathering have for the economies of Serbia and the region?

– It’s actually the Digital Week of the Western Balkans that’s being held in Belgrade, but also in other Serbian cities. The summit will gather not only prime ministers from across the entire region and other decision makers in this sphere but also global experts and digitalisation professionals from European chambers and representatives of the business community. Within the scope of this summit, the Eurochambres Digitalisation Committee will also meet, with which we will discuss joint chamber projects aimed at promoting the application of existing innovative digital tools for companies and the creation of new ones.

That will also provide an opportunity to present large, regional telecommunications and IT companies that provide solutions for the digitalisation of countries and economies, as well as for their networking to ensure that those associated will be as technologically ready as possible to conduct major projects of interest to the entire Western Balkans. Another special quality of this year’s summit is the participation of as many as 38 innovative start-ups from the region in the trade fair part. This is, for them, a chance to connect with large companies from the most diverse fields, which have capital and which – in complex processes modernisation and technological updating processes – increasingly rely on the ideas and projects of smaller, but more innovative companies.

Top Products And Professional Staff Guarantee Data Protection ICT security is one of the fastest growing ICT sectors in the world. The importance of protecting...
Read more

Robert C. Martin, colloquially known as "Uncle Bob", is one of the world's most famous software engineers, among the authors of the Agile Manifesto,...
Read more

"Investing in infrastructure is the biggest challenge for our accelerated digital transformation. We need essential funds that cannot be allocated from the budget and,...
Read more

“There is evidence in numerous reports that innovation comes mainly from startups, because they are small, flexible and unconstrained by large numbers of customers,...
Read more

Stimulating tax policy and assistance in developing products for the global market is a way for the state to support the transformation of the...
Read more

She was a child who desired success, and her teacher kept telling her ‘we’ll see how long you’ll stick it out’. Everything that she...
Read more

We have to learn to expect more and more cases of famine, because we’re at the beginning of what has been called the “grand...
Read more