The vision of the Tax Administration is to become an efficient tax administration that has available modern integrated information systems that support business processes and that are simple, understandable and aligned with the best international practises

“Our task is to create an organisational and functional framework that will help in stimulating taxpayers to legally service their tax liabilities, while simultaneously and systematically detecting and punishing taxpayers who knowingly avoid the payment of taxes.”

The Tax Administration currently has 5,165 employees, including those who are most familiar with tax law and have amassed many years of practical experience. “A procedure is currently underway, by way of a public application call, for the hiring of 71 executors, but the Tax Administration needs additional employees, primarily economists, legal practitioners and IT experts,” says our interlocutor.

What else should be done in terms of systemic solutions to ensure the improved collection of taxes? Which legal solutions would you highlight as currently presenting an impediment to the work of taxpayers?

– Much has been done, and the effects are evident. The system of electronic tax registrations has simplified the process of taxpayers fulfilling their tax obligations, while we’ve also improved the quality of services and relations with taxpayers.

Thanks to all of this, since 2015 we’ve had a constant trend of increasing collections, which is also continuing in 2018, during which we collected 839.4 billion dinars in the first seven months, compared to the 791.1 billion dinars collected during the same period of 2017.

The coefficient of realising total collections of the Tax Administration in the first seven months of 2018 totals 106.1 compared to 2017.

We will concentrate in future on further improving the efficiency of business processes, primarily in terms of determining, controlling and collecting public revenues, and working in cooperation with the line ministry – the Ministry of Finance – and on the improvement of legislation that forms the basis for the work of the tax administration.

The Tax Administration is somewhere in the middle of implementing its five-year programme of reform and transformation. Are you satisfied with the results of this process to date?

– Some very complex aspects of tax administration reform have been finalised, which taxpayers are familiar with and face daily.

We have enabled electronic submissions of applications for all forms of tax, concluded on 1st January 2018. A new organisational structure has been established, while we have formed a new Sector for providing services to taxpayers and a specialised organisational unit for strategic risks.

The Foreign Investors Council has an open dialogue with the Tax Administration, with the objective of identifying key issues in the implementation of laws and further discussing progress in institutional reforms. What are your expectations for this dialogue?

– We’ve strived to open the Tax Administration up to the business and professional community, and the dialogue with the Foreign Investors Council is significant for us in multiple ways. That’s primarily because we are endeavouring – through communication with the Foreign Investors Council and the business and professional community – to reach the best solutions in specific segments of operations, which is in the interests of all participants.

Is the reduction in the number of branches the only measure required to ensure uniformity in the application of tax regulations?

To what extent does the business community utilise the possibilities provided with the formation of the Sector for Taxpayer Services and Education?

– The very formation of the Sector for providing services to taxpayers demonstrates the clear intention of the Tax Administration to establish a client-like and fair relationship with taxpayers. 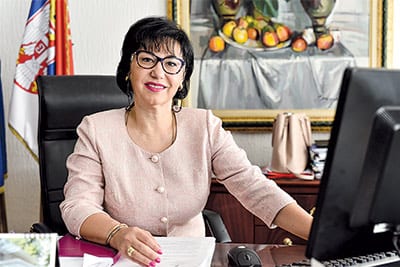 Unique centres, designated as “Vaš poreznik” [Your Tax Officer], have been opened within branches in 37 locations across Serbia to provide services for taxpayers, providing them with answers to various questions relating to the field of tax legislation.

The work of the Tax Administration Contact Centre has improved, providing taxpayers with answers to their questions via telephone and email. I would single out, in particular, the introduction of the practice of visiting newly-registered taxpayers, with the aim of familiarising them with their rights and obligations.

Serbia recently received the best rating of any country in the entire region of Eastern Europe and Central Asia for processes related to tax administration after the filing of tax returns. What steps will you take next to ease procedures for business users?

– The first step that we will make next will be to implement four types of tax certificates in electronic form via the ePorezi portal for registered companies: confirmations of total settled tax liabilities, settled VAT and health insurance obligations, and confirmations of settled obligations for a specific Payment Approvals Number (specific tax return).

The grey economy is particularly strong in the employment sector. What can the Tax Administration do, in cooperation with the relevant ministries and inspection services, to remedy the situation in this domain?

– The Tax Administration continuously conducts appropriate activities and campaigns aimed at reducing the scope and volume of the grey economy, whether that’s done independently or in cooperation with the relevant state institutions and inspection services. During the first seven months of this year, field control inspectors conducted 8,256 control operations.

Of that total, 3,013 control operations confirmed irregularities. This led to the calculating of newly discovered public revenue totalling 15 billion dinars. In July 2018, control operations of the recording of turnover via fiscal cash registers were performed with 2,993 taxpayers on the territory of the Republic of Serbia, during which the employment status of engaged workers was also checked. Irregularities were confirmed in 1,041 establishments (35.61%), with requests filed for the initiating of misdemeanour charges and temporary operational bans pronounced as measures. In addition to repressive measures, we’re also doing a lot on promotional activities.

How satisfied are you with the results achieved in countering tax evasion cases, especially when it comes to goods that are subject to excise duties?

– The most common examples of tax payment avoidance are evident among taxpayers who deal with trade in goods subject to excise. Thanks to intensive campaigns to combat illicit trade in this part of the market, we are achieving exceptional results.

During the first seven months of 2018, in coordination with other state bodies, we seized seven tonnes of leaf tobacco, 5.7 tonnes of cut tobacco, 15.9 tonnes of oil and petroleum derivatives, 294,696 packets of cigarettes and 1,612,50 litres of alcoholic beverages.

Through communication with the Foreign Investors Council and the wider business and professional community, we endeavour to reach the best solutions in specific segments of operations, which is in the interests of all participants

Furthermore, with the aim of clamping down on the grey economy in the turnover of goods and services that engage in unregistered activities, through advertising and sales via the internet, inspectors of the Tax Police also temporarily confiscated other goods without documentation proving origin, worth a total of almost four million dinars.

In the first seven months of this year, the tax police department filed a total of 880 criminal reports with the relevant prosecutor’s offices, with charges against 1,116 individuals for 1,024 criminal offences, resulting in total tax avoidance amounting to 6.5 billion dinars, and with 66 individuals incarcerated for their crimes.

What will be your priorities in further reforming the Tax Administration?

– We analysed the “passage of time” during 2017 and ascertained the parts of programmes where the most significant advancements were made, while individual parts where implementation required additional efforts were analysed separately, which also formed the basis for the creation of the Action Plan for the Transformation Programme for the 2018-2023 period. Precisely then, in 2023, we should have completed implementation of everything planned and arrived at the realisation of a Tax Administration that functions in accordance with the highest international standards and best international practice.

Tax Administration reform implies the simultaneous implementation of three key strategic initiatives. The first is strengthening strategic management and improving the basic functions of the Tax Administration. The second strategic initiative or objective is to redesign the organisational structure and improve ancillary functions. Improving services for taxpayers is the third objective of Tax Administration reform, though it is no less important than the first two – given that all three objectives should lead to an increase in voluntary servicing of tax obligations among taxpayers and reduction in the costs and time required for taxpayers to comply with tax regulations.

The goals of the Ministry of Finance are to further maintain fiscal stability and eliminate systemic obstacles to economic growth. In the process of...
Read more

Over the past six years, the National Bank of Serbia , has succeeded in securing and preserving price and financial stability, which has provided...
Read more

Thanks to the progress achieved in creating institutional preconditions for the development of agriculture and the food industry, the Ministry received praise from the...
Read more

H.E. Sem Fabrizi, Ambassador and Head of the Delegation of the European Union to the Republic of Serbia