Prime Minister Ana Brnabic said today that the goal of the project “e-Paper – from counters to digital transformation” is to reduce the administrative costs of the economy by 15 to 20% by 2021.

At a conference on improving business conditions and reducing the administrative burden on the economy, Ana Brnabic emphasised that the ultimate goal of the project is that all the administrative tasks for which citizens and businesses are done with one click from the apartment or office.

She indicated that from 1 June 2017, when the automatic data exchange system was put into operation, more than 5.3 million data had been electronically exchanged within the public administration.

The Prime Minister recalled that the obligation to use the seal for the economy had been abolished as of 1 October 2018, but that some officials were still seeking it so that 350 applications had been received through the Contact Centre. 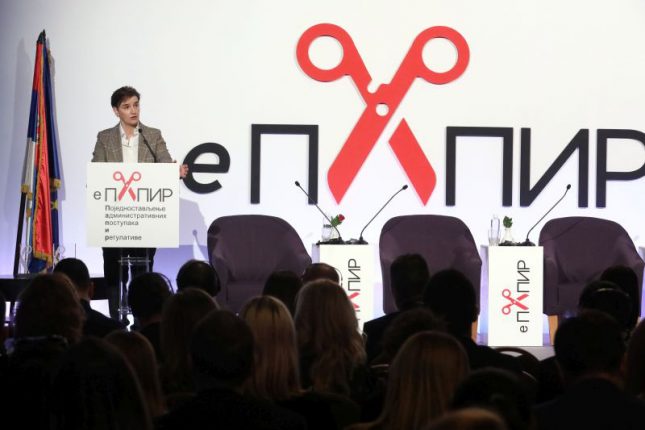 According to Brnabic, in addition to digitisation, a very important component is the continuous education of civil servants in local government, local governments and public companies in order to more effectively accompany the changes.

Head of the EU Delegation to Serbia Sem Fabrizi said that the project is important especially for small and medium-sized enterprises, which generate 35% of GDP in Serbia.

Serbia is going in the right direction, ranking well in the World Bank’s “Doing Business List” for SMEs, but Serbia still needs to reduce para-fiscal burdens, he said, adding that the EU funded the project with a €2.5 million grant.

German Ambassador to Serbia Thomas Schieb stressed that the quality of public services is an indicator of good governance.