The University Of Belgrade Marked Its 214th Anniversary

The University of Belgrade marked its 214th...
Read more

Who does it already? The University of Belgrade’s Faculty of Mechanical Engineering is organised to train future engineers who will be able to respond to the new challenges of Serbia’s development says Dragan Aleksendrić PhD

At the Faculty of Mechanical Engineering in Belgrade students learn how to improve the functional characteristics of some system over a longer period of time; how to incorporate mechanisms to learn, conclude and adapt to new working conditions. Artificial intelligence techniques ensure the most important features of future intelligent systems: learning, “creativity”, “thinking”, reasoning, understanding, autonomous behaviour, adaptability, the ability to self organise etc.

Artificial Intelligence techniques certainly represent the basis for the development of future innovative services and products. There’s no doubt that artificial intelligence is bringing a revolution in the world, a revolution like the one created by the discovery of electricity, in all areas of society.

The Faculty of Mechanical Engineering in Belgrade has long since recognised that innovative approaches, based on artificial intelligence techniques, have applications in all aspects of business, and in society as a whole. Companies that massively utilise new solutions based on artificial intelligence have higher revenues, completely new business processes, improved operational quality and customer satisfaction, realising their goals faster and with reduced risk (intelligent business). 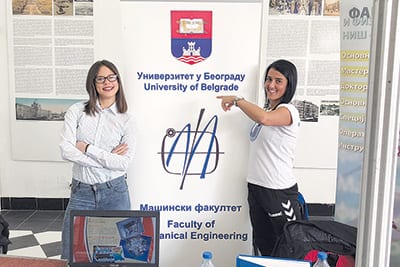 Artificial intelligence changes the world as we’ve known it until now. We are entering an era of a new type of intelligence, an intelligence that can be created. Mechanical engineers have already started doing that, are we all aware of this? Intelligent systems are becoming a “tool” of engineering for creating the future.

Does this mean that we will replace the “actual” reality with a new “virtual” reality, or artificial reality? The answer is no! We must be aware of the fact that the human brain, and therefore every human being, has its own “reality”, or „sense of reality”, that differs from others. This is because our brain creates (simulates) its own “reality” in which we believe because we’re not aware of any different “reality”. Yes, the human brain, whether we like it or not, also deals with simulation, and does so by simulating our own “reality” and the future!

This actually means that we don’t know what reality is and how much that reality differs from our “reality”. Our brains are both student and teacher, judge and lawyer, prosecutor and jury, and of course the engineer everything! If that’s all so, can we transfer the creation of reality and the future into a new environment – the environment of artificial intelligence? Yes, we can. Artificial intelligence doesn’t essentially differ from that which is known to us as human intelligence – it’s just that we process data using different tools. Generally speaking, it is considered that intelligence implies an ability to collect, store and search data, and the possibility of processing data with the aim of making decisions in new or unknown circumstances. So, the output of intelligence, human and/or artificial, is knowledge!