The Honourable Vice President of India, H.E. M. Venkaiah Naidu, paid an official visit to Serbia from 14th to 16th September 2018. This was the first high-level visit of an Indian dignitary to Serbia after a gap of three decades and came during the year in which the two countries celebrated the 70th anniversary of the establishment of bilateral diplomatic relations.

The Vice President was accompanied by a high-level delegation comprising Shiv Pratap Shukla, Minister of State for Finance, four Indian Members of Parliament, senior officials, a business delegation and representatives of the media. During his high-level engagements, Vice President Naidu held detailed discussions on a range of bilateral and multilateral issues with Serbian President Aleksander Vučić, Prime Minister Ana Brnabić and National Assembly of Serbia Speaker Maja Gojković, as well as addressing a business forum.

During his meeting with President Vučić, Vice President Naidu discussed important aspects of bilateral relations, as well as global and regional issues that are of common interest to both countries.

The two leaders expressed their commitment to building upon the long-standing friendly ties between the two countries. In the area of economic cooperation, the two agreed to enhance cooperation in priority areas like agriculture, food processing, defence manufacturing, science and technology, information technology, infrastructure, tourism and pharmaceuticals. During the joint media briefing, President Vučić complimented India’s political leadership on the country’s stellar economic results. As he said, “India is witnessing exceptional economic progress. We are happy for the country that has been our long-time friend and well-wisher”. He also thanked India for supporting Serbia’s territorial integrity. President Vučić then hosted a banquet in honour of Vice President Naidu.

Vice President Naidu met with National Assembly of Serbia Speaker Maja Gojković and held detailed discussions on a range of bilateral and multilateral issues. In a rare gesture, the visiting vice president was invited to address a special session of the Serbian National Assembly. He did so in the same parliament hall where former Indian Prime Minister Jawaharlal Nehru addressed world leaders upon the launch of the Non-Alignment Movement (NAM), alongside then veteran Yugoslav leader Marshal Tito. In his hour-long address to the lawmakers of the host country, Vice President Naidu recalled fondly the close affinity and shared the vision with which the leaders of both countries played a key role in launching the NAM.

Vice President Naidu and President Vučić jointly addressed the India-Serbia Business Forum on 15th September, which included the participation of a large number of Serbian companies and an Indian business delegation. The forum included discussions regarding bilateral cooperation in the areas of agriculture, energy, pharmacy, the IT industry, tourism, education etc. Speaking at the Forum, the Vice President gave a detailed account of the rapid strides being taken by India in various fields, including enabling, predictable and reform-orientated financial and investment eco-systems offering mutually beneficial partnerships. President Vučić took the opportunity to invite Indian investors to Serbia, which would open them up to new markets thanks to Serbia’s existing Free Trade Agreements. So far there have been few cases of investments by Indian companies in Serbia, with Indian tractor manufacturer TAFE taking over Serbia’s IMT (Industry of Motors and Tractors). Moreover, the Embassy Group of India has invested $20 million in the construction of an IT park in Serbia. Bilateral trade between India and Serbia reached a total of approximately 200 million euros in 2017.

With full military honours and the playing of the two national anthems, Vice President Naidu – accompanied by Serbian Defence Minister Aleksandar Vulin – laid a wreath beside the Tomb of the Unknown Soldier on Belgrade’s Mount Avala. 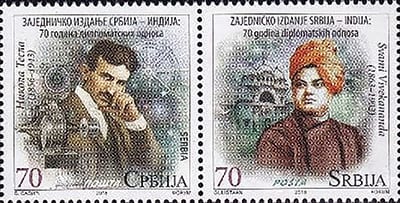 Services Agreement, aimed at boosting trade and tourism. The signing of the agreement on air services has created possibilities to establish direct flights between the two counties and future commercial code-sharing agreements between airlines.