Manuel Bouard, Director of the French Institute in Serbia

The Serbian Youth Is Our Priority

“The health crisis compels us to consider new models of cooperation. We are working on the development of digital programmes that will complement existing ones and find their audience through adaptation to suit the needs of the modern world, says Mr Manuel Bouard, director of the French Institute in Serbia

Manuel Bouard, counsellor for cooperation and culture at the French Embassy in Belgrade and, as of recently, director of the French Institute in Serbia, does not face an easy mission. Specifically, he is expected to bring even further improvements to the already extremely high-quality programme and work of the institution he heads. That provided ample reason for our interview.

As a counsellor for culture at the French Embassy in Serbia, you are familiar with the local culture scene. How would you describe it; what would you emphasise and what would you criticise?

Many young creative artists provide dynamism to the artistic life of Serbia, and that is encouraging. We are especially joyful about the increasing presence of women in the world of comics, as well as in the field of fine arts. We follow them with enthusiasm. It is necessary for that independent scene in Serbia to be more visible. We are here to support the establishing of professional partnerships with the French cultural milieu. But culture in Serbia certainly also lives thanks to the Serbian institutions with which the French Institute regularly cooperates.

The French Institute has a recognisable and successful programme in Serbia. Will you initiate some changes aimed at improving it even more?

Our long-term goals have not changed: we are working to promote cooperation and partnerships in the domains of culture, linguistics and science. We attach special importance to the decentralisation of events and the revival of cooperation across the entire territory. Many travelling projects, such as the French Film Caravan or the Climate Caravan, are appearing throughout Serbia, thanks to our branches in Niš and Novi Sad.
However, the youth of Serbia is still our priority, because they are the future of the country and the future of French-Serbian relations. And that’s why a large number of our projects are directed towards them.

I would emphasise two strategic goals: defending the French language represents our traditional mission, but that language should no longer be considered only the language of culture. Over 300 million people speak French. It is a language that enables travel and work in France, but also in Africa, Canada and many other countries. And that’s why we will work even more to highlight its advantages for the professional life of individuals.
Secondly, the health crisis compels us to consider new models of cooperation. We are working on the development of digital programmes that will complement existing ones and find their audience through adaptation to suit the needs of the modern world.

The state of emergency declared during the pandemic is, unfortunately, still a current topic due to the cancelling of plans and activities in all areas, including culture. How will you try to overcome the break in activity?

Encounters are the heart of our work. It is a genuine form of suffering for artists, for people from the world of culture and ideas, that they cannot travel and make contact with the audience. An entire way of life has been brought into question. That’s why we need to establish new links between our cultures, to focus on research, starting with the digital kind, which will enable respect for the imposed measures of distancing while still enabling debates and exchanges of opinions, which represent a source of creativity and a better life. The digital world and the world of social networks are our allies in this difficult time. Thus, French language courses are no longer held only at the French Institute, but also at a distance. These are the beginnings of our digital offer.

Francophonie, the trademark event of the Institute, was this year held in a form adapted to the situation imposed by the Coronavirus. The positive side of that change is that our translators of French literature have been to the fore. Do you agree?

Paradoxically, the health crisis shed light on the exceptional role of Serbian translators and their impact on the quality and intensity of cooperation and exchanges of ideas between Serbia and the Francophone world. The book is in the first place today… it is resistant to the social distancing measures imposed by the crisis! The work of translators is generally poorly acknowledged. And actually what they do is of essential importance, which we could see for ourselves during the Molière Days festival of literature that we managed to implement as soon as the state of emergency in Serbia was lifted.

We showed the incredible wealth of translations of Francophone authors available to Serbian readers. Hundreds of the latest translations of authors from as many as 18 Francophone countries were exhibited at our Francophone Book Salon. However, the health crisis also hit the publishing world. The French institute will continue to support this sector, which represents one of the main pillars of our mutual cooperation. 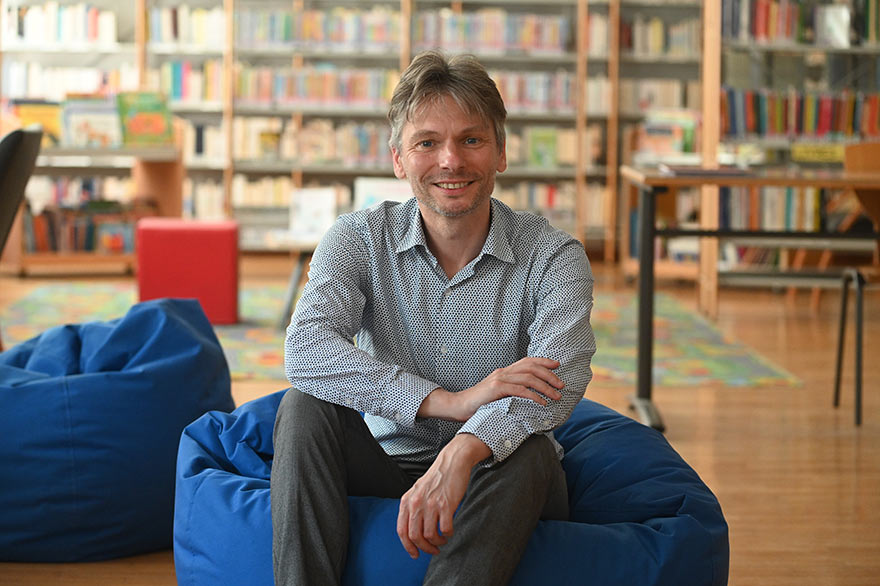 The mission of every foreign culture centre or institute is to promote its home country through its culture. The latest programme of the French Institute to that end is the French Film Festival at the Drive in Cinema. Is this a sign that you’ve assigned contemporary art with the role of promoting good relations between our two countries?

It is a fact that contemporary creativity provides the basis for strengthening mutual ties. The Festival of French Film is this year simultaneously taking place online and under the open sky, on Ada Ciganlija. This is just one example of our support for contemporary art. Seven French fine artists will present themselves at the October Salon, thanks to our partnership with the Belgrade Cultural Centre. One Serbian artist will soon take up residence at the International Centre for Comic Strips in Angoulême. All of this testifies to the importance we attach to contemporary creativity.

Have you already established cooperation with some institutions in Serbia and, if so, on what grounds and to mark which occasions?

We exist thanks to partnerships. Those that enrich French-Serbian relations should be nurtured, while new ones should also be created. Our two countries attach great importance to film art, and thereby also cooperation in that area. Many partnerships have been established between the Film Centre of Serbia, the French National Film Centre, FEMIS and well-known production and distribution companies. The agreement on co-productions, which was renewed by the governments of our two countries last year, reflects the vitality of our relations in this area.

Since my arrival, the French Institute has signed an agreement with the Centre for the Promotion of Science in Serbia that relates to the promotion of scientific culture and the development of awareness about environmental protection among young people. Under the scope of the promotion of Francophonie, an agreement was signed with the National Museum in Belgrade on the publishing of a French version of its catalogue. We have been cooperating for many years with Matica Srpska. Novi Sad will be the capital of European culture in 2021, and we are participating in the celebrations by establishing a partnership with the Novi Sad 2021 Foundation. These are just a few examples that illustrate the dynamism of cooperation. And we will continue to develop it.

Over 300 million people speak French. It is a language that enables travel and work in France, but also in Africa, Canada and many other countries

What would you single out from your planned programme until the end of the year?

In addition to the aforementioned, I would also single out the following events: on 23rd September a football tournament will bring together Belgrade high school students who are learning French, and its patron will be Mr Ćurković, a former president of the Serbian Olympic Committee and Partizan Football Club; The Francophone Careers Salon, which will be held on 28th October in Niš, will be an opportunity to present to students the advantages of the French language for studying and pursuing a career.

The Digital November event will take place from October to December and will provide an opportunity to highlight new information and communication technologies; the Climate Caravan, a project that we’re leading in cooperation with the European Union and that will this year start in Svilajnac in July, will travel around the whole of Serbia until the end of the year, in order to encourage young people to consider climate change.

How do you comprehend the notion, as considered by quantum physics, that parallel worlds exist? The answer is very easily, if you discuss it...
Read more

We still see great interest among American companies in investing and doing business in Serbia, but businesses are now naturally asking difficult questions about...
Read more