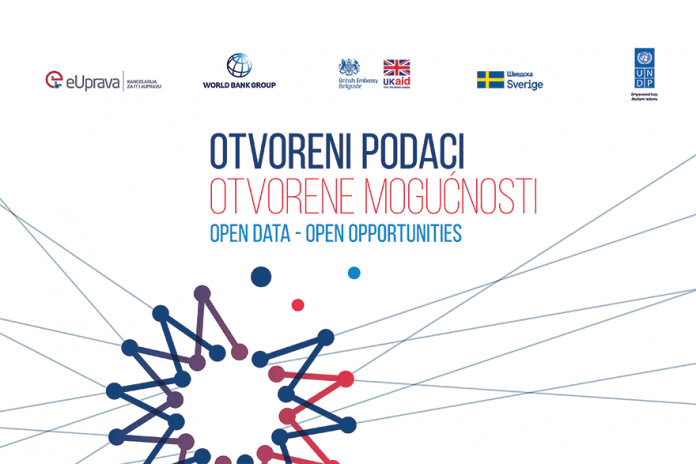 Open data stimulates economic growth: the European Data Portal estimated (2016) the total market value of open data in the EU at between €193 -€209 billion, while the potential global economic benefits are valued at $3 billion annually. Open data also improves the efficiency of public administrations, rendering the work and decisions of public officials more transparent. This leads to greater accountability and trust, as well as stimulating collaboration and citizen participation.

In 2015, in agreement with the Serbian Ministry of Public Administration and Local Self-Government, UNDP Serbia and the World Bank launched the ‘Open Data Readiness Assessment’, which showed that Serbia had adequate preconditions to start a national open data initiative. Consequently, open data was introduced to the National Strategy for E-Government Development and the Action Plan for Open Government Partnership (OGP). UNDP supports the Government’s Open Data Working Group, which today has 58 members from more than 25 government, civil society, industrial, academic and international organisations.

Open data features prominently in the current programme of the Government of Serbia. Speaking in her Keynote Address to the National Assembly upon assuming office, Prime Minister Ana Brnabić pointed out that opening up access to the data of all state institutions in Serbia could lead to GDP growth of one per cent and an improvement of up to two per cent in the employment rate.

To help Serbia join the data revolution and empower all stakeholders to participate and compete in an increasingly digital world, UNDP implements the “Open Data – Open Opportunities” project in partnership with the Government of Sweden, the World Bank and the UK Embassy, whilst working hand in hand with the Serbian Government Office for IT and e-Government (ITE).

The ITE took over the coordination of open data and launched the National Open Data Portal (http://data. gov.rs) in October 2017. Since then, ITE and UNDP have jointly supported 25 state institutions in six sectors that have now opened 435 data sets which are currently available on the Portal.

At the policy level, the National Assembly of Serbia adopted the Law on e-Government, which regulates the Open Data framework, while the draft law amending the Freedom of Information Act stipulates that state institutions should disclose information of public importance through Digital Information Directories in an Open Data format.

In order to create a dynamic Open Data platform and overall ecosystem, in addition to favourable policy and regulative environment, and data supply by public agencies and institutions, there is a need for the demand for Open Data and its innovative reuse. For this reason, ITE and UNDP are connecting stakeholders from the private, public and civil sectors, as well as science and research organisations, through training courses, knowledge sharing, study visits and mentoring programmes. Ten different civil society organisations have to date received grants for open data work, while three open data challenges have recently been launched to solicit innovative ideas based on open data. In 2018, with ITE and UNDP support, the first Open Data Week in Serbia was organised, with 11 events throughout the country bringing together over 350 participants from the burgeoning open data community.

Public institutions produce and preserve huge amounts of data. When more of this valuable information is available online in an open form, the wider public may use it for new purposes, enabling innovation and accelerating development.