Top Quality Service And State Of The Art Technology

Assessing the investment climate in Serbia as positive, and with a view to the strategic and logistic significance of Serbia, the Danube, Free Zones, the idea to construction an oil terminal of Mitan Oil in Smederevo was born

“The entire project is implemented as a greenfield investment, which means that we built the plant, with a capacity of 50,000m3, from the foundations. This 25-million-euro investment was financed exclusively from the company’s own sources, without relying on loans from domestic banks and without government subsidies, which is a real rarity in Serbia,” says Dušan Vuković, Managing Director of Mitan Oil, at the beginning of this interview.

Mitan Holding is a Swiss company based in Zurich. In its many decades of experience amassed in the field of trading and storing oil and oil derivatives, this Swiss Holding has collaborated successfully with renowned international partners on the delivery of derivatives in peacekeeping missions, including those of the UN, the Defense Fuel Agency USA, the Swiss agency VBS-SWISSCOY and many others.

Mitan Oil today has the largest privately-owned oil terminal in Serbia and the region.

“At any given moment we can store 50,000m3 of white derivatives with the possibility of delivery three million litres daily, or 500,000 metric tonnes annually,” notes Vuković. 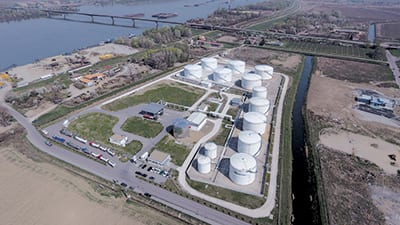 At Mitan Oil they nevertheless believe that their corporate strength does not depend on capacities, but rather on an explicit commitment to top-quality service and the most up-to-date technology.

“The complete working process, from receiving goods to their final dispatch to end-users, is carried out using devices made with the most advanced technology of German and French manufacturers, leaders in the field of oil terminal equipment, such as Satam, Mercedes, Bornemann, Endress Hauser and others. The organisation of operations is harmonised with international standards ISO 9001: 2015, ISO 14001: 2015 and OHSAS 18001: 2008,” says director Vuković.

Upon the realisation of its planned projects, Mitan Oil will be one of the few Terminals in this region with four alternative methods of receiving goods

According to Mitan Oil’s MD, investments of this type are important because they enable large international companies to maintain a presence on the RS market, and for citizens and companies in Serbia that represents the possibility of purchasing fuel produced in Austria, Hungary, Romania and other European countries, which means more competitive prices and better quality.

Since 2011, when the company was founded and investors first set foot on the unregulated agricultural land in the Smederevo industrial zone, until today, when that same location houses a modern terminal, through which 50 per cent of petroleum products are imported into Serbia, the company has traversed a prosperous but also difficult road. However, this is not the end of strategic growth and development plans.

“In the next six months, we plan to invest in the construction of an industrial rail track that will enable the reception of goods by rail. In this way, we will minimise all risks of receiving goods via the Danube, such as unnavigability due to low or high water levels. This is of strategic importance to Serbia, as it enables greater supply stability, security and continuity in critical periods. Alongside that, we have signed a protocol agreement with company Transnaft for connection to the product line system through Serbia. In this context, upon the realisation of these projects, we will be one of the few Terminals in this region with four alternative methods of receiving goods,” announces Vuković.