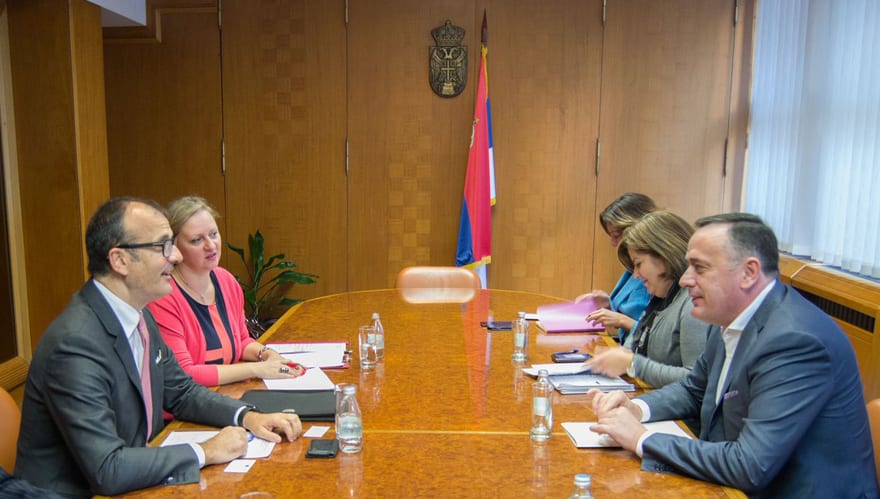 Serbian Mining and Energy Minister Aleksandar Antić has held talks with the head of the EU delegation to Serbia, Ambassador Sam Fabrizi, about the construction of a Bulgaria-Serbia gas interconnection that is evaluated as being the most important joint project that the EU will support, via IPA funds, with 49.6 million euros.

Minister Antić and Ambassador Fabrizi estimated the Bulgaria-Serbia gas interconnection project as being extremely important for Serbia and the region as a whole, given that it diversifies the gas supply. The meeting saw this project assessed as the most significant joint initiative that the EU will support, via IPA funds, with €49.6 million – announced the Serbian Ministry of Mining and Energy.

– Serbia is fully committed to implementing this gas interconnector project and we will do everything for it to be implemented in coordination between the Serbian institutions and Bulgaria’s competent authorities – said Antić.

It was noted at the meeting that a large number of RES projects are being developed in Serbia, with confirmation that 500 megawatts will be installed, in addition to the already constructed 100 megawatts of installed power, with which Serbia will achieve its goal of 27 per cent of total energy consumption coming from renewable sources by 2020.

Antić and Fabrizi agreed that it is necessary to pay special attention to energy efficiency in the coming period and that by year’s end the Ministry of Mining and Energy, in cooperation with the Ministry for European Integration and representatives of the European Commission, will consider the possibility of establishing an Energy Efficiency Fund.

On the occasion of the European Day for Victims of Crime marked on 22 February, the OSCE Mission to Serbia and the EU Delegation...
Read more
Cord MagazineLeaders Meeting Point