Citizens of Serbia and Hungary can freely pass at all ten border crossings between the two...
Read more

The United States Government announced an additional $20.3 million in assistance to the Government of Serbia,...
Read more 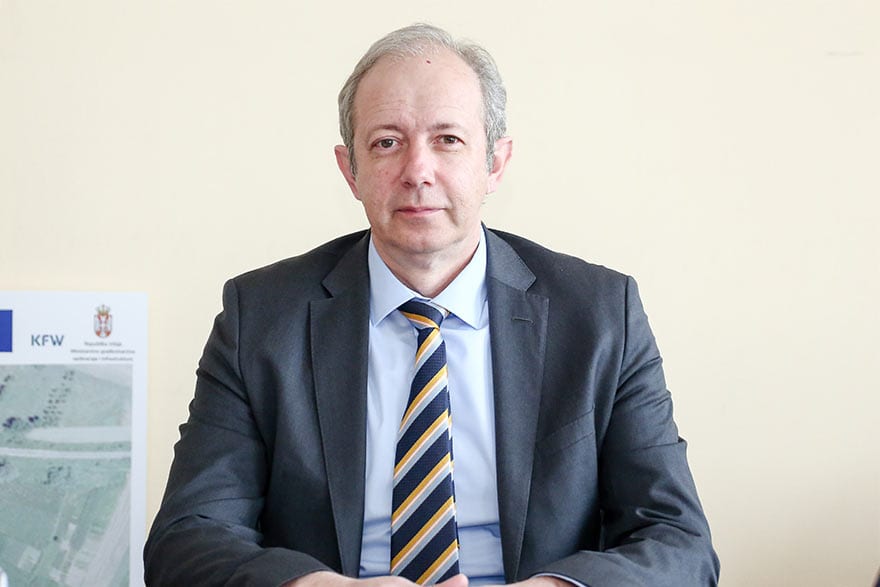 Zoran Lakićević, State Secretary at the Ministry of Construction, Transport and Infrastructure

The utility infrastructure projects that Serbia is implementing in the field of water supply, wastewater management and solid waste management, with the support of German development bank KfW, contribute to increasing quality of life for about two million people, or close to a third of Serbian citizens

Serbia’s wealth of natural resources and its commitment to managing those resources in a rational and sustainable manner define the level by which the population’s quality of life will improve, but also the level of economic growth of our country. Access to, and care for, water, as one of the most important natural resources, represents an important factor of the sustainability of Serbia’s entire economic system, and a reason for the great attention being paid to investments in improving utility infrastructure.

A strong contribution to the development of the Republic of Serbia’s infrastructure has been provided within the scope of bilateral cooperation with the Federal Republic of Germany. The programme for water supply, wastewater treatment and sewage systems in medium-sized Serbian cities has brought numerous benefits, which are reflected in the populations’ improved quality of life and growth in foreign direct investments, but also the development of tourism and other economic branches.

Within the framework of German-Serbian bilateral cooperation, via the programme for water supply, wastewater treatment and sewage systems in medium-sized Serbian cities, which is worth 142 million euros, significant support was provided to the modernisation and construction of water and sewage infrastructure in mid-sized towns in Serbia. The complete programme is implemented with the financial assistance of the Government of the Federal Republic of Germany and the European Union, via German Development Bank KfW, in cooperation with the Ministry of Construction, Transport and Infrastructure.

Priority in the programme’s implementation is given to investment programmes, the success of which is rated according to set performance criteria, which relate primarily to the economical management of assets and investment sustainability.

This programme is unique among its kind in Serbia, as it monitors results and assesses the sustainability of the operations of utility companies participating in the programme during its implementation. Since the start of implementation, technical and institutional support has been provided for 20 cities in Serbia, encompassing a total population of 1.6 million inhabitants through five individual sub-programmes, within which over 200 individual investment projects have been completed or are in the process of being realised.

Testifying to the effects of investment in utility infrastructure is the fact that, via Programme 1, which has an investment budget of 48 million euros, the programme has secured – in Kraljevo, Loznica, Pančevo, Šabac, Smederevo, Sombor and Vršac – a sustainable and continuous supply of drinking water for the population of a satisfactory quality that’s in accordance with domestic legislation, EU regulations and WHO recommendations.

A secure water supply and sufficient quantities of drinking water have been provided, as well as extended water supplies and a sewage network through construction/reconstruction/ procurement: four water treatment plants for drinking water with a total capacity of 1420 l/s, 267km of water pipes, 3,000 household connections, 27,000 household water metres, 19km of sewage pipes, 13 pumping stations, eight wells, two water intakes, a digitalised control and water management system (SCADA system), embankment strengthening for the flood protection of sources, increased capacity of reservoir space by 9,870m3, equipment provided for the detection of leaks in the network, reductions in irrational water consumption in individuals cities of up to 12%, reduced water losses in individual cities of up to 15%, and new machinery also provided.

The Government of Serbia continues to invest in utility infrastructure (through Programme 6 with KfW), with a special emphasis on the areas of water supply, wastewater treatment and solid waste management, which has been recognised as one of the important factors with a direct impact on the economic growth of the Republic of Serbia.

The Government of Serbia is also working to improve utilities infrastructure and housing in Roma settlements, in 9.5 million euros is being invested through the IPA 2013 grant scheme

It is estimated that it is necessary to invest around 1.3 billion euros in the area of wastewater management alone, for the construction of infrastructure for wastewater treatment plants, and 2.5 billion euros for collectors and the sewage network. The agreement has been reached that in the framework of bilateral cooperation between the Republic of Serbia and the Federal Republic of Germany, investment and institutional support will be provided to another eight cities and municipalities that lack appropriately advanced collection, disposal and treatment of wastewater. The investment budget totals 50 million euros.

The Government of Serbia is simultaneously also working to improve utility infrastructure and housing in Roma settlements. Within the scope of the project “Implementing durable housing solutions and improving physical infrastructure in Roma settlements”, financed from the IPA 2013 grant scheme and being implemented in 13 municipalities and cities in the Republic of Serbia, which has a total value of 9.5 million euros, 123 housing units have been built or reconstructed to date, housing close to 600 people, including more than 250 children (in Odžaci, Lebane, Ub and Svilajnac).

The basic aim of the project is to increase the social inclusion of members of the Roma population, while the tangible objectives of the project are to improve the infrastructure in substandard Roma settlements, build social housing for evicted Roma people, and reconstruct or upgrade facilities owned by private individuals.

Also being launched is the implementation of the IPA 2014 project for improving the socio-economic living conditions of the Roma population. The planned results of this project relate to the development of currently substandard Roma settlements through the development of technical documentation and urban plans for a maximum of 100 substandard Roma settlements in Serbia and local level capacity building for the inclusion of Roma populations. Also under preparation is a new programme from IPA 2018 for housing and communal infrastructure in Roma settlements that are worth 20 million euros.

The noted projects illustrate the Serbian Government’s commitment to improving the situation for Roma people, which is why we’ve formed a special Coordination Body tasked with consolidating the efforts of state institutions, civil society and the Roma community. The results achieved clearly show that these are not just strategies and stories. Everything we do is seen in action and contributes to improving the everyday lives of Roma people, whether that relates to paved roads, resolved sewage issues or a new building in which they will live.

Citizens of Serbia and Hungary can freely pass at all ten border crossings between the two countries as of today at 10.00, without obligatory...
Read more