Relations between the Federal Republic of Germany and Montenegro are mainly characterized by German support for economic reforms in the framework of the European and Euro-Atlantic integrations of Montenegro. German development aid has been used towards the implementation of structural reforms, rehabilitation and advancement of the financial sector, construction of infrastructure, and the development of the economy (SMEs) and tourism.

In the meantime, the German Federal Ministry for Economic Cooperation and Development has provided additional funding for the project. The German Reconstruction and Development Bank (KfW) has been operating in Montenegro since 2001 and has been a partner to the Montenegrin government in funding and implementing a number of projects, particularly in utility infrastructure, energy and banking sectors.”

In which economic sectors do these two countries share common interests? How can you further bolster the economic cooperation with Germany?

– With support from the GIZ, the Embassy of the Federal Republic of Germany in Montenegro and the Delegation of German Economy in Montenegro and Serbia (AHK), the Montenegrin Chamber of Commerce and the German Committee on Eastern European Economic Relations (OA) held a Montenegrin- German Business Forum in Budva in May 2012. Over 200 business people from both countries participated in the Forum.

The main conclusion of this event was that energy, energy efficiency, utility infrastructure and tourism were the priority segments in the economic cooperation between the two countries.

Regarding foreign investments, are you happy with what Montenegro has been offering to investors in terms of quality of the business environment, that is to say, reducing the red tape, corruption and increasing predictability for doing business?

– In the last few years, Montenegro has been focusing on having an open market and fostering the private sector as the driving force behind economic growth and development. The measures that we have been implementing are geared toward reducing tax rates and customs duties, proportional taxation, the free flow of goods and capital (there are no restrictions on capital transactions), and the free repatriation of profit. We also have the euro as the national currency, and foreigners are given the same treatment as nationals.

Considering that we are a small and open economy, we are very susceptible to global economic changes. As a result, the global crisis has disrupted Montenegro’s economic progress, and reduced the overall foreign aggregate demand in the country.

Consequently, all the deficiencies of our economic system have been revealed. In order to overcome these shortcomings, the Montenegrin government has recognized the protection of investments and the development of a competitive business environment as strategic priorities. The bolstering business environment has been widely recognized as an effective tool for further improvement of the free market institution.

Each step closer to the EU translates into improving living standards and living conditions in our country, as well as creating more stable conditions for further development

Montenegro is on its way to becoming an EU member. In that context, what are the priorities of the Montenegrin government when it comes to investors, and how advantageous is to invest in Montenegro compared to other regional countries?

– Montenegro has been progressing dynamically toward EU membership. Each step closer to the EU translates into improving living standards and living conditions in our country, as well as creating more stable conditions for further development. At the same time, this progress will result in higher employment and improving other aspects that are crucial for bettering the lives of our population.

Apart from implementing structural reform policies and improving our investment and business environment, we have been continuously working on development programmes too. These programmes are devised for SMEs, for attracting fresh capital and creating conditions for realization of new investments. Our aim is to use all economic resources efficiently and increase the competitiveness of our economy.

Out of all foreign investments made in Montenegro, how many of them are German and which economic segments have received German investments?

– In 2012, direct investments from the Federal Republic of Germany amounted to €14.6 million, while, in 2011, they stood at €8.1 million. The most important German investment in Montenegro is Deutsche Telekom acquiring Montenegro Telekom via Hungarian Matáv. The global electronics conglomerate Siemens AG has opened a branch in Montenegro.

Another German company WTE Wassertechnik from Essen and the Budva municipality have concluded an Agreement on Construction of a Waste Water Treatment FaConsidering city on the Budva Riviera worth €58 million. Also, Sachsen Wasser GmbH has been officially operating in Tivat as a consultant in developing capacities of Vodakom and local public enterprises.

The Montenegrin government has been doing a lot on advancing the energy sector. What has been done so far and what are the future plans in this respect?

I would like to remind you that Montenegro is a member of the Energy Community and therefore shares the same goals with the Energy Community, namely increasing the safety of energy supplies, attracting investments in construction of new energy production and transmission facilities, better utilization of renewable energy resources, advancing energy efficiency, bolstering market competition and improving environmental situation.

Considering that EU regulation provides a legal framework for the Energy Community Treaty, Montenegro, as a member of the Energy Community, must harmonize its legislation with EU energy and environmental protection directives. The implementation of obligations stemming from the Energy Community Treaty is hugely important not only for the success of our energy reforms but also for the overall European integration process and economic development of our country. In line with our commitments, Montenegro has been implementing energy sector reforms in legislative and regulatory aspects, in addition to institutional and organizational aspects. 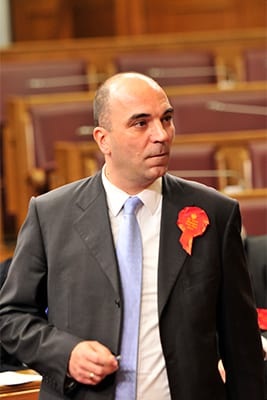 FaConsidering that we are a small and open economy, we are very susceptible to global economic changes. As a result, the global crisis has disrupted Montenegro’s economic progress, and reduced the overall foreign aggregate demand in the country

How large is the investment capacity of these projects, and where do you expect foreign investors to step in?

– The investment capacity of these energy projects has been estimated at close to €2 billion, not counting oil and gas whose financial ‘weight’ will be known once we launch an oil and gas research tender, now in its final stage. We have already been notified of the interest shown by globally renowned energy companies.

We have 20 companies expressing their interest (for participating in the tender) with five of these companies being among the top ten global energy companies. We expect investors to provide their support in the sustainable utilization of our coal reserves and hydro-potential, particularly in new clean energy resources.

Through joint efforts, we will create a valuable export product and, apart from creating overall energy supply stability in the country thanks to a transmission infrastructure which we have been implementing together with Italy, we shall have a valuable valorisation on the European market.

How much does the progress in the Euro-Atlantic integration process affect international economic cooperation, particularly in view of investments?

– If Montenegro were a NATO member, this would just validate its reputation as a stable and safe (risk-free) investment destination which, in turn, would bring the country many economic benefits that would contribute to increasing and sustaining its dynamic economic development.

The countries that have joined NATO have recorded higher investments due to heightened interest by investors for investing in progressive and politically stable economies. All NATO members belong to a group of the most prosperous countries in the last 60 years. The experiences of these countries show that considering the collective security concept in NATO, Montenegro would become a safer and more secure place for foreign investments.

Also, we should mention the long-term economic benefits that would lead to a higher credit rating, investment stability, higher aggregate demand, higher GDP and general development of the Montenegrin economy.

Unbalanced regional development is certainly one of the weak spots of the Montenegrin economy. Do you have strategies and plans for improving the current situation?

– Yes, we do have strategies and plans whose goal is to reduce regional development differences. Essentially, there is the Regional Development Strategy for Montenegro 2010-2014 and an action plan for the Strategy’s implementation, apart from strategic plans at the local level. Spatial plans are also very important for achieving more balanced regional development, as are national sector strategies, especially those that apply to the development of SMEs, energy (the energy strategy covering the period until 2030 is currently being drafted), agriculture and tourism. The government has also started to work on drafting the 2014-2020 Regional Development Strategy.

As the Montenegrin Economy Minister, are you satisfied with the number of foreign investments made in Montenegro?

Immediately after declaring its independence, Montenegro was the number one country in terms of FDI influx in the region. Of course, recent global events have negatively affected FDI flows, but the implementation of strategic projects like building a motorway and the second unit in the Pljevlja thermal power plant will certainly substantially contribute to a higher FDI in Montenegro even during this time of cautious investing.

The efforts that the Montenegrin government has been investing in the last few years, especially since the onset of the global economic downturn, were geared toward helping the biggest Montenegrin exporter to recover

The biggest Montenegrin exporter – the Podgorica Aluminium Plant (KAP) – has been struggling for some time now. Is there an end to the troubles in the KAP, and what has the government been doing in this respect?

– The efforts that the Montenegrin government has been investing in the last few years, especially since the onset of the global economic downturn which has been very hard on the aluminium industry, were geared toward helping the biggest Montenegrin exporter to recover.

However, these efforts were not sufficient and, on top of all existing problems with the company’s management, especially when it comes to the problem with power supply and various political problems, we were unfortunately unable to reach a unified stand about the solution for the company’s problems.

All of this has lead to KAP’s now being bankrupt and having to deal with the risks that come with bankruptcy. Unlike KAP, the Nikšić Ironworks (Željezara Nikišić) is a good example of a company that, although undergoing bankruptcy procedures, has managed to attract interest from a renowned investor.

We think that this company now has a realistic chance of becoming successful. Although the situation in the Aluminium Plant is very different compared to other such companies, we still hope for a good outcome, namely for the bankruptcy to lead to the company’s recovery instead of extinction.

The ties between Montenegro and Germany are reflected in many different areas, this includes very fruitful development cooperation
Read more

Dynamic Progress Towards the EU

The global crisis has disrupted Montenegro's economic progress. However, the Montenegrin government has recognized the protection of investments and the development of a competitive business environment as strategic priorities.
Read more

The rule of law is the single most important condition for German business to invest in Montenegro. It will contribute to more business activities of German companies in Montenegro, the potential of which is surely not sufficiently exploited today.
Read more